ARC Review: The Woman in the Library by Sulari Gentill 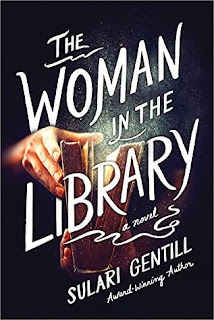 In every person's story, there is something to hide...

The ornate reading room at the Boston Public Library is quiet, until the tranquility is shattered by a woman's terrified scream. Security guards take charge immediately, instructing everyone inside to stay put until the threat is identified and contained. While they wait for the all-clear, four strangers, who'd happened to sit at the same table, pass the time in conversation and friendships are struck. Each has his or her own reasons for being in the reading room that morning—it just happens that one is a murderer.Award-winning author Sulari Gentill delivers a sharply thrilling read with The Woman in the Library, an unexpectedly twisty literary adventure that examines the complicated nature of friendship and shows us that words can be the most treacherous weapons of all.
Review:
I want to thank NetGalley and Sourcebooks for providing me with an e-galley of this book to read and give my honest review.
First off, being a bibliophile, how could I not want to pick this book up? A book whose premise starts in a library. I had to read it. Second, the idea of meeting friends in a library? SIGN ME UP! I've been very into mysteries lately, so once I read the blurb, I had to see what this one was about. Plus it's an author I have never read and I like to try new authors!
Fast forward to a few chapters in and I'm really intrigued. The author is receiving emails from a long time fan and reader who wants to read the work she's writing. But half way through, things become a little creepy, and then all out stalkery and there went my love of it. I didn't understand what the point of the correspondence was. It didn't add anything to the story for me. Couple that with huge plot holes and the introduction of information that for sure seemed pertinent but never played out and you end up with a book I just didn't love. I tried, I really did.
I could not connect with the characters. Their fast friendship seemed almost forced. They went from a short chat in the library about a scream (the thing that ultimately throws them together, in more ways than the reader won't realize until the end) to suddenly spending all their time together, as if there were no other people in their lives. It's not relatable, it's not understandable, it just didn't even make sense. And there was nothing all that unique about any of these people. Not one of them made me like them, or hate them, in any way. Zero connection which lead to not really caring what happened to any of them.
Then add to it how convoluted the story becomes. It made it really hard to keep things straight and to get into the story.
And the ending? I'm not even sure what the author was trying to do with the ending. I get it was supposed to initiate some kind of suspense and leave you guessing but I didn't really understand what even happened.
The writer has potential, though she needs to tighten things up. The main character is an author who doesn't plot and I'm wondering if this was a hint at the actual author herself because with all the holes she left, it seems like she didn't plot it out to make sure it all made sense.
Overall, I'm disappointed to say this was not my cup of tea.

Once upon a time, Sulari Gentill was a corporate lawyer serving as a director on public boards, with only a vague disquiet that there was something else she was meant to do. That feeling did not go away until she began to write. And so Sulari became the author of the Rowland Sinclair Mysteries: thus far, ten historical crime novels chronicling the life and adventures of her 1930s Australian gentleman artist, the Hero Trilogy, based on the myths and epics of the ancient world, and the Ned Kelly Award winning Crossing the Lines (published in the US as After She Wrote Hime). In 2014 she collaborated with National Gallery of Victoria to write a short story which was produced in audio to feature in the Fashion Detective Exhibition, and thereafter published by the NGV. IN 2019 Sulari was part of a 4-member delegation of Australian crime writers sponsored by the Australia Council to tour the US as ambassadors of Australian Crime Writing.Sulari lives with her husband, Michael, and their boys, Edmund and Atticus, on a small farm in Batlow where she grows French Black Truffles and refers to her writing as “work” so that no one will suggest she get a real job.THE WOMAN IN THE LIBRARY, Sulari’s latest novel will be released on 7 June 2022.