ARC Review: The It Girl by Ruth Ware 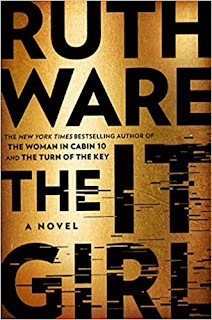 The #1 New York Times bestselling author of One by One returns with an unputdownable mystery following a woman on the search for answers a decade after her friend’s murder.April Coutts-Cliveden was the first person Hannah Jones met at Oxford.Vivacious, bright, occasionally vicious, and the ultimate It girl, she quickly pulled Hannah into her dazzling orbit. Together, they developed a group of devoted and inseparable friends—Will, Hugh, Ryan, and Emily—during their first term. By the end of the second, April was dead.Now, a decade later, Hannah and Will are expecting their first child, and the man convicted of killing April, former Oxford porter John Neville, has died in prison. Relieved to have finally put the past behind her, Hannah’s world is rocked when a young journalist comes knocking and presents new evidence that Neville may have been innocent. As Hannah reconnects with old friends and delves deeper into the mystery of April’s death, she realizes that the friends she thought she knew all have something to hide…including a murder.
Title: The It Girl
Author: Ruth Ware
Publisher: Gallery Books
Expected Publication Date: July, 12, 2022

I want to thank Net Galley and Gallery Books for providing me with an ebook of this title to read and give an honest review.

This is my second Ruth Ware book. The first book I didn't love but wanted to give this author another chance, as I'd heard so many things.

I like a good who done it. Books that keep me guessing from beginning to end. This wasn't it. I guessed the who pretty much from the start. But because I am not always right, I figured I'd continue.

The story itself has merit. The plot was promising. I like the idea of it being a true mystery: who killed April? Despite someone having been convicted of it, we were going to find out if it was truly that person.

I enjoyed the main character's, Hannah,  before and after POVs. They helped move the book along.

What I didn't love was the repetition. I felt like the narrator just kept circling back to the same things: April was my best friend, if I was wrong I must find out who actually did it, my baby/my baby/my baby. It drew the book out to a length it just didn't need to be at.

Once the before caught up with the after, I got really bored. I didn't feel like the book was moving me in a direction to stay focused and wanting to actually know the ending. I pushed through only because I needed to see if I was right. And I was.

I also found the writing flat. The tone of the narrator never truly showed excitement, horror, fear, etc. I just didn't feel it while I was reading. Too much time for Hannah to think about all the possibilities, over and over again.

Unfortunately, I don't think I will read anymore books from this author. Certainly she is not for me, though that doesn't mean she is not for others. 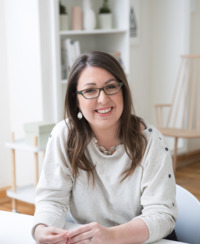 Ruth Ware grew up in Sussex, on the south coast of England. After graduating from Manchester University she moved to Paris, before settling in North London. She has worked as a waitress, a bookseller, a teacher of English as a foreign language and a press officer. She is married with two small children, and In a Dark, Dark Wood is her début thriller.Find her on twitter at www.twitter.com/ruthwarewriter, on facebook at www.facebook.com/ruthwarewriter or via her website - www.ruthware.com