Blog Tour: How Willa Got Her Groove Back (Willa and Finn #1) by Emily McKay @Emily_Mc_Kay @GCReading 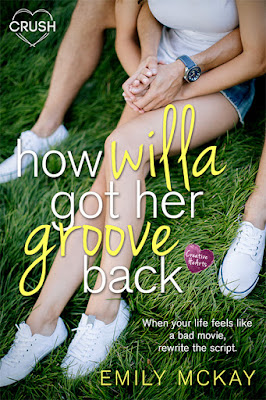 When your life feels like a bad movie, rewrite the script.

When Willa Schofer's father comes home from a business trip with an über-famous new fiancée, Willa's senior year blows up in paparazzi-fueled flames. Overnight, she has a new house, a new car, and a new soon-to-be stepbrother--the unbelievably hot, unbelievably arrogant, Finn McCain. Thank god he's constantly pushing her buttons, or she might do something irresponsible. Like fall for the jerk.

Just when Willa's decided to avoid him for, oh, ever, Finn lands in the center of her senior project team. Seriously--how hard is it to shake a guy? At least her work on the project snagged the attention of the (second) hottest guy in school. He might only be into her because of her famous stepmom, and he's not quite as exciting as a certain annoying housemate, but at least she's allowed to crush on the guy.

Because crushing on your annoying stepbrother? So not cool.

Brooke's Review:
I want to thank Entangled : Crush for providing me with a copy of this book to read and give an honest review. Receiving this book for free has in no way altered my opinion or review.

I have really been enjoying the Entangled: Crush line of books. They are cute and funny and romantic. I enjoy the fact that they are not only about the romance. There is always some underlying conflict that needs resolution. With this book it was no different.

Let's talk about the characters, shall we.
First we have Willa. I really enjoyed getting to know her. She's sassy and smart and protective all wrapped in a nice ball. I can also tell that Willa is not the kind of girl who likes change. She's had enough of it to last her a lifetime. So when her father drops the big marriage bomb on her, and she didn't even know anything about it, you can imagine she gets a bit bent out of shape. She's very determined to show her father that marriage to someone who is super well known is not the way to go. This is her protective side coming out for sure. She doesn't want her father's heart broken. He's had enough of that.
Enter Finn McCain, son of the uber famous star Willa's father is intent on marrying. Finn is arrogant and all about self-preservation. Of course he finds himself drawn to Willa, despite the fact they are soon to be family. But Finn is used to putting up his guard, after all, he's lived all his life with his mother in the spotlight. He doesn't let anyone close; purposely pushes them away so he doesn't have to ever reveal who he truly is. I was a bit sad for Finn. I wanted to take him in my arms and hug him and tell him it would all be alright. And, while he thinks his mother's marriage to Willa's father might not be such a good idea, he has reasons for wanting the marriage to work. Reasons he keeps secret from Willa.

I love the chemistry between these two. Both are intent on staying away from each other. They put up walls to make it look like they are not affected by the other. But it's hard to keep up such a facade when you end up in the same group for a class. I will say the tension really got me. But the end, I needed the two of them to finally say how they felt! It was killing me. I will say there wasn't quite as much romance as I would have liked. However, this is a series, so I'm interested to see where the author takes what she's started.

The secondary characters are really great. I know this is a spin off of the first Creative Hearts book, which I did not read, so I'm sure I would get more if I read that (more about Willa's friends). I found them undeniably intriguing and fun.

McKay has a great writing style. She infuses witty situations where there might otherwise be all out sobbing tears from the characters. One thing I would have liked to see more was Finn's POV. The book is split between him and Willa but it's mostly Willa. I felt like I didn't get to know him quite as much as I would have liked to. I hope there is more of him in the next installment.

Overall, this was a funny, cute and romantic read full of real life situations and characters that could be your own best friend. If you're a fan of YA contemporary romance along the lines of Kasie West or Elizabeth Perkins, then you'll enjoy McKay's story!

Emily McKay is a life-long fan of books, pop-culture and anything geeky. She has a black belt in Tae Kwon Do and baking cookies. When she’s not kicking-ass and scooping cookie dough, she’s watching videos from Screen Junkies (her favorite Youtube channel) or Pemberly Digital or Classic Alice. Okay, she has a Youtube problem! She’s seeking help. Really. Though, she may also have a slight problem with procrastination.

When the internet is down and there are no chocolate chips in the house, she does write books – everything from Harlequin romance novels to post-apocalyptic YA. Though her interests may appear broad, the common denominators are swoony heroes and snarky humor.