Blog Tour: Beyond the Stars by Stacy Wise @StacyWiseBooks @GCReading 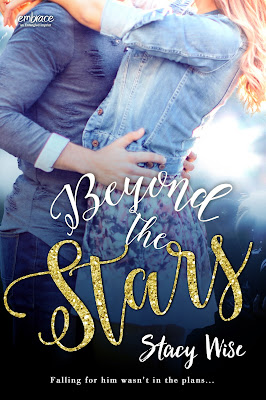 Falling for him wasn't in the plans...

Most girls would kill for the opportunity to work for Jack McAlister, Hollywood's hottest actor, but twenty-one-year-old Jessica Beckett is ready to kick him out of her red Ford Fiesta and never look back. She should be spending her junior year in France, eating pastries and sharpening her foreign language skills. Instead she's reluctantly working as Jack's personal assistant, thanks to her powerhouse talent agent aunt.

Jack is private, prickly, and downright condescending. Jessica pushes his buttons—she's not the type of girl to swoon over celebrity heartthrobs, precisely why her aunt thought she'd be perfect for the job—and Jack pushes right back.

But as she begins to peel away his layers, Jessica is shocked to find she craves her boss's easy smile and sexy blue eyes. The problem is, so does the entire female population. And what started out as the job from hell soon has Jess wondering if a guy like Jack could ever find love with a regular girl like her.

Excerpt:
Jack grabs two leather jackets off a row of hooks in the garage. “Put this on,” he says, handing me a jacket, “and this.” He passes me a helmet that’s a smaller version of his. “We’re going to blow off some steam.”
Whoa. Blow off some steam on a motorcycle? That doesn’t sound dangerous or anything. The only time I’ve been on a motorcycle is when Colin’s friend took me to the Jamba Juice that was a mile from my house. He drove like a snail, and that was a big deal for me. I hold the helmet in my hand as if it’s a dead rat. My stomach is starting to hurt really bad.
Jack is geared up and ready to go. I tell myself to put on the stupid helmet, but I can only hug it close.
“Hey, what’s taking you so long?”
“I, um... Fear?”
He turns off the bike so he can hear me. “What’d you say?”
“It’s nothing.” I brush back the hair from my face and try to put on the helmet with shaky hands. I focus on the ground, so I don’t have to look at him, and adjust the chinstrap. Before I can get it fastened, he’s in front of me, his hands stopping mine. He slides off my helmet, careful not to hurt my ears.
“What’s going on?” His voice is soft.
“I’ve never ridden on a motorcycle at night in the dark with someone who may be angry or stressed or frazzled.”
“I’m not angry or stressed.”
“Frazzled?”
He smiles. “Maybe, but I won’t take it out on the bike. And I’m sure as hell not going to put either one of us at risk. I figured we could cruise down the hill and hang out in a dive bar I know. It’s just off Sunset. If you don’t feel like going, though, it’s cool.”
“Oh. Okay.” I tuck my hair behind my ears and absently twirl a strand in my fingers. “I thought you meant you wanted to go flying around the Hollywood Hills. I can go down the street. I’m fine with that.”
“I’ll drive carefully. Your job is to hang on tight, got it?”
“Yeah.” I can hang on tight.
He takes my helmet and clicks it on me. “That feel all right?”
“Yep. I may need like ten shots now, but yeah.”
“Good thing I’m the driver,” he says with a grin. He helps me into the jacket and zips it up to my chin. It’s huge, but it’ll keep me warm. I wait for him to climb onto the bike first and hop on behind him. He reaches back for my hand and places it firmly on his stomach. His jacket is zipped, but I can feel the hardness of his abs through it. I try to keep my fingers from exploring, but they have a mind of their own. He pulls the other hand around and says, “Don’t let go, okay? Just keep your hands here, and you’ll be fine.”

Stacy Wise is the author of BEYOND THE STARS (Entangled Embrace, 2016). She has a B.A. in Communication Studies from UCLA and a Masters in Teaching from Chapman University. She lives in California with her husband, four children, two dogs, and ever-changing number of fish. BEYOND THE STARS is her debut novel.