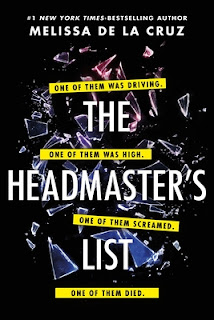 One of them was driving.One of them was high.One of them screamed.And one of them died.When fifteen-year-old Chris Moore is tragically killed in a car crash, Argyle Prep is full of questions. Who was at the wheel? And more importantly, who was at fault?Eighteen-year-old Spencer Sandoval wishes she knew. As rumors swirl that her ex, Ethan, was the driver that fateful night, she can’t bring herself to defend him. And their messy breakup has nothing to do with it – she can’t remember anything from that night, not even what put her in that car with Ethan, Chris, and Tabby Hill, the new loner in school. Was it just a night out that went very wrong? And is it just a coincidence they were all part of Argyle’s esteemed honor roll, the Headmaster’s List? In a place ruled by pedigree and privilege, the answers can only come at a deadly price.Set against the glitz and glamour of an elite LA private school, Melissa de la Cruz's first YA thriller is an addictive mystery perfect for fans of Gossip Girl and A Good Girl's Guide to Murder.
Title: The Headmaster's List
Author: Melissa de la Cruz
Expected Publication Date: 2/28/23
Publisher: Roaring Book Press
Review:
I'd like to thank NetGalley and Roaring Book Press for supplying me with an eARC of this title to read and give an honest review.
I'm loving mysteries these days. And a good murder mystery at a snooty private school sounded great to me! Who done it?
This is my first title by Melissa de la Cruz. I enjoyed her writing, it flowed well. The short chapters were very helpful in pushing the book along (I always appreciate a book with short chapters!).
I did guess who done it early on, but it didn't keep me from wanting to continue reading and find out how the main character figured it out.
I was annoyed with the police aspect. They were totally clueless and I feel like there was no real effort on their part to investigate who done it. I almost felt like they were going to be involved somehow beaus why else would they blow off investigating further. Also, the investigation they did do was fairly unrealistic for me, too many things missed. This was an area with plot holes I didn't love.
Overall it was fun. I'd pick up a title from this author again.

Melissa de la Cruz is the New York Times and USA Today best-selling author of many critically acclaimed and award-winning novels for teens including The Au Pairs series, the Blue Bloods series, the Ashleys series, the Angels on Sunset Boulevard series and the semi-autobiographical novel Fresh off the Boat.Her books for adults include the novel Cat’s Meow, the anthology Girls Who Like Boys Who Like Boys and the tongue-in-chic handbooks How to Become Famous in Two Weeks or Less and The Fashionista Files: Adventures in Four-inch heels and Faux-Pas.She has worked as a fashion and beauty editor and has written for many publications including The New York Times, Marie Claire, Harper’s Bazaar, Glamour, Cosmopolitan, Allure, The San Francisco Chronicle, McSweeney’s, Teen Vogue, CosmoGirl! and Seventeen. She has also appeared as an expert on fashion, trends and fame for CNN, E! and FoxNews.Melissa grew up in Manila and moved to San Francisco with her family, where she graduated high school salutatorian from The Convent of the Sacred Heart. She majored in art history and English at Columbia University (and minored in nightclubs and shopping!).She now divides her time between New York and Los Angeles, where she lives in the Hollywood Hills with her husband and daughter.
at 8:14 AM