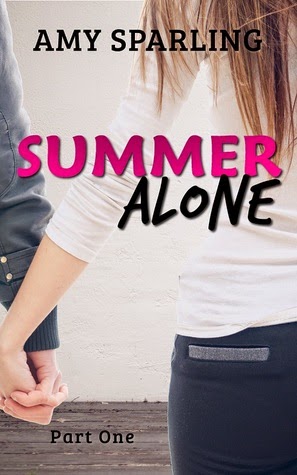 Summary from Goodreads:
From the best selling author of Summer Unplugged, comes a new series set in the same world. Becca's senior year of high school is approaching and she's tired of being the dorky best friend. Determined to reinvent herself with help from Bayleigh, she plans to spend the summer breaking out of her shell. When Bayleigh gets grounded and sent away for three months, Becca's plans come crashing down before they've even started.

Now Becca is alone and can't even talk to Bayleigh on the phone. Not wanting to miss out on the summer before senior year, she takes a job at the local indoor BMX track. The job is fun, her boss is laid back, and the place is packed with hot guys. One of them just might have a crush on her. This may be a summer without her best friend, but it doesn't mean she'll have to spend the summer alone.

Part 1 of a 4 part novella series.

Excerpt
It’s the first day of summer and I’m sitting in my bedroom, still wearing pajamas. It’s pretty much where I can be found any time I’m not in school. If there’s one thing to know about me, it’s the one thing everyone knows about me: My name is Becca Sosa and I am a loser. Or in the words of Trey Sheppard at the senior’s party last week, I am a lame-o dork-o.
I hate insults like that. The ones that are said behind your back, directed to other people as you walk by. The insults you weren’t prepared to hear because the people who say them—Trey Sheppard—are usually nice to your face. It’s one thing to call someone an asshole if they are being an asshole; that’s a trait you have control over, something you can choose to be or not to be. Like when my best friend Bayleigh accidently dropped a piece of popcorn and it fell on her little brother’s head and he got all confused about it. Then she kept tossing popcorn at him all night, just to mess with him. I told her she was a jerk for doing it. That’s an insult that was deserved, even though she thought it was hilarious.
But lame-o dork-o? I didn’t set out to become the lamest, dorkiest person in the city of Lawson. It’s not like I was intentional about it. Besides, I’m normal. I’m not dorky. I don’t wear thick-rimmed glasses with tape holding them together, or suspenders or orthodontic headgear or something like that. That’s why those are the worst insults. Being made fun of for something that’s just…just you.
The sad thing is that I didn’t realize there were people who thought of me that way. Sure, when your best friend is crazy beautiful and wild in the best way and makes friends everywhere, you kind of expect to be known as the less popular one out of the two of you. But I guess I hadn’t realized how low I actually was on the popularity totem pole.
Bayleigh has always been more popular and more outgoing than me. She’s had boyfriends since we were in sixth grade, back when having a boyfriend meant holding hands before and after school and telling everyone you had kissed when really you hadn’t.
But even with the drastic differences in our personalities and likeability factor at school, Bayleigh has always stuck by me. We met at a daycare when we were four years old, during a time when my stay at home mother had temporarily gotten a job to help pay for Grandma’s nursing home. Bayleigh and I were instant best friends, according to our mothers, and even though I only had to go to that daycare for four months, our moms exchanged phone numbers and we stayed best friends with play dates and sleepovers. I really owe a lot to Bayleigh. She’s the world’s greatest best friend.

About the Author
In case you didn't know, Amy isn't my real name. It's a pen name I use to publish books and novellas for teens that have a romantic theme. My real name is Cheyanne Young and I also publish YA books under that name, but they are usually in different genres and for older age groups.

I chose the name Amy Sparling when I independently published my first book, Deadbeat. I wasn't sure if I would keep the pen name at first--I wasn't even sure if I'd keep publishing. But I got incredibly lucky and found a group of young adults who loved my stories and kept asking for more. You guys seriously have made my writing hobby into the greatest part of my life. I will continue writing books under this name as well as publishing books of a different nature under my real name.