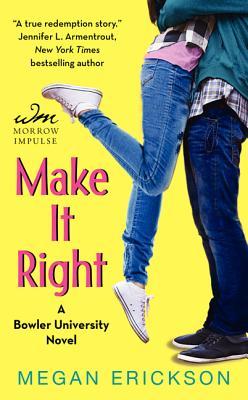 Size and strength win any fight, and never show weakness.

When a rash of assaults sends Bowler University for a tail spin, Max volunteers to help teach a self-defense class. One of the other instructors is the beautiful pixie-faced girl he keeps butting heads with…and who challenges everything he thought he knew.

Lea Travers avoids guys like Max - cocky jocks who assume she's fragile because of a disability caused by a childhood accident. She likes to be in control, and something about being with Max makes her feel anything but. But during the moments he lets his guard down, Lea sees a soul as broken inside as she is outside. Trusting him is a whole other problem...

When the assaults ramp up and hit close to home, Lea and Max must learn, before it’s too late, that true strength can come from vulnerability…and giving in to trust is sometimes the only way to make things right.

Brooke's Review:
I want to thank William Morrow for providing me with an early copy of this book to read and review. Receiving this book for free has in no way altered my review or opinion.What I love about books like this is that they can be read as stand alones even though some of the characters may have been introduced or had their own stories in previous books. It's nice to get to know them from other books but not necessary
Since I knew Max a bit from the first book, I wasn't sure what I would think of him in this one. I didn't think I could fall for him but I kind of did! He came off as so arrogant and didn't seem to treat women all that well. But deep down Max wants to just please people. And he's stuck in a place with his family that he doesn't know how to escape. He feels like he'll never get to live the life he wants to live and be happy. So when he gets a taste for Lea he's in for a big surprise. He tries to come off as confident and coky, a know it all, but she shows him fast she can put him in his place. On the flip side, you can see that Max has a romantic and sensitive side that he doesn't really want to show to anyone. But Lea changes that!Lea is spunky and downright strong. I love how she doesn't take anything from anyone and stands up for herself no matter what. So when she starts to fall for Max, I'm a bit surprised, but they kind of compliment each other in ways that I wasn't expecting. Where she is strong, he is actually weak, though he would never admit to it. Her vulnerability is heightened around him, though she doesn't want to show it.Both these characters become vulnerable when they start to open up to each other, slowly breaking each other's walls down. They compliment each other as they both learn about love, forgiveness, and going after exactly what you want and what will make you most happy. Megan fills some moments with fluff, but for the most part their relationship is a roller coaster of emotion as they tear down each other's walls.Megan's writing is fun and fresh. I will say that I have issues with getting into books told in third person for the most part, but Megan really does it well and doesn't make it awkward. I was never worried that I wouldn't like this story, because it wasn't predictable. There was lots of depth and character growth.Anyone who loved the first book in this series will be super happy with this one, as well. Maybe even more so, I know I was. If you're a fan of Cora Carmack or Jennifer Armentrout, I think you'll absolutely love Megan's series! I'm looking forward to future books in this series.

Megan Erickson grew up in a family that averages 5’5” on a good day and started writing to create characters who could reach the top kitchen shelf.

She’s got a couple of tattoos, has a thing for gladiators and has been called a crazy cat lady. After working as a journalist for years, she decided she liked creating her own endings better and switched back to fiction.

She lives in Pennsylvania with her husband, two kids and two cats. And no, she still can’t reach the stupid top shelf.