Blurb from Goodreads:
In Serjana Caelum’s world, gods exist. So do goddesses. Sera knows this because she is one of them. A secret long concealed by her parents, Sera is Lakshmi reborn, the human avatar of an immortal Indian goddess rumored to control all the planes of existence. Marked by the sigils of both heaven and hell, Sera’s avatar is meant to bring balance to the mortal world, but all she creates is chaos. A chaos that Azrath, the Asura Lord of Death, hopes to use to unleash hell on earth.
Torn between reconciling her past and present, Sera must figure out how to stop Azrath before the Mortal Realm is destroyed. But trust doesn’t come easy in a world fissured by lies and betrayal. Her best friend Kyle is hiding his own dark secrets, and her mysterious new neighbor, Devendra, seems to know a lot more than he’s telling. Struggling between her opposing halves and her attraction to the boys tied to each of them, Sera must become the goddess she was meant to be, or risk failing, which means sacrificing the world she was born to protect.

The Cover Contessa's Review:
I want to thank Net Galley and Sky Pony Press for providing me with a copy of this ebook to read and give an honest review. Receiving this book for free has in no way altered my opinion or review.

Book covers can make or break a book. Even without cracking this book open or reading the blurb, I wanted to pick it up. Why, you ask? Well, just look at that gorgeous cover. It pulls you right into wanting to grab it. So much so that I went and bought myself a copy of it when it was published (so I could have it on my Kindle and in real life). Without ever having read any of Amalie's books, I would have picked this one right off the shelf!

I don't know much about Hindu mythology. I have learned a few things here and there, mostly from participating in certain types of Yoga. So you can imagine I was excited to go into a world that would teach me about this culture.

Sera (Serjana) is a great character. She tall and awkward. She sees herself as kind of the freak. She doesn't have many friends and pretty much keeps to herself. Despite being an "outcast," Sera owns who she is. She knows she is different and she does not try to conform to who she is not. I love that Howard chose to make her this way. It really helped to watch her grow and change and become a strong woman, someone she did not think she could be. She can be a tad bit impulsive, which is totally normal for a teenager. I liked all her characteristics as they made her feel real and she became easily relatable.
Kyle was awesome. This punk kid who hangs out with the queen of awkward. I love that he likes her for who she is. But, as with Sera, Kyle has a secret he doesn't want to share. It makes him different and possibly dangerous. Unfortunately, he can't deny who he is. He's loyal despite this secret, which an ultimately destroy Sera and her family. He teeters on the edge of good and bad throughout the book because in his heart he does not want to betray Sera.
Dev, well, I needed more from him. I didn't really get to know him as much as I would have liked. He's kind of this mystical character shrouded in mystery. You can tell from the start he's really not of this world, he's definitely something more. And Sera is inexplicably drawn to be his friend. Their attraction in undeniable. And we later learn that their connection goes beyond the reader's world.

The romance seems to play a big part in this book. Not only because there is a semi-love triangle, but because it is essential in understanding who Sera and Dev actually represent. I love that they have this otherworldly connection which is slowly revealed in the book.

I liked the plot a lot. Again, not knowing much of the Hindu mythology it was interesting to read and learn things about the Gods and Goddesses and what they represent. I know that Howard turned some of the myth into fiction. I'd be interested to do a bit of searching to find out more about this mythology. I do think that there could have been more world building for this part of the book. But for the most part it was addressed and definitely held my interest.

Howard incorporates a lot of twists and turns in this book, as well. I love the time spent in both realms and how those realms collide through the use of certain characters.

I am a huge fan of Howard's writing. I have read Almost Girl and Waterfell and really enjoyed them both. So I wasn't surprised to love her writing in this book just as much. She has a great knack for description, really painting a picture of the scene so that you feel like you are truly there with the characters. And I love that she has such great growth with her characters. I really saw the changes that happened with Kyle and Sera in this book. They morphed into totally different beings by the end!

Once I picked this book up, I had a pretty hard time putting it down (if it weren't for work, kids and life I think I would have finished it in one day!).  This is a truly different YA book, set in a world that I haven't seen written about before. For anyone who enjoys learning about mythology and different cultures, this is a must read! 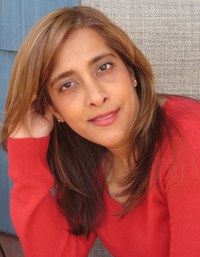 A rising star among young adult writers, Amalie Howard developed a loyal following after releasing her debut book, “Bloodspell,” in 2011. Now, she is returning with five new books that are sure to excite her devoted fans and catch the attention of new readers.

A bookworm from the beginning, Howard grew up on a small island in the Caribbean with her nose buried in books. When she was just 13 years old, her poem “The Candle” was published in a University of Warwick journal, marking a sign of great things to come. Howard immersed herself into other cultures, globetrotting through 22 countries in North America, Europe, Asia and Australia. After moving to the United States, she earned a bachelor’s degree in international studies and French from Colby College in Maine. She also holds a certificate in French literature from the Ecole Normale Superieure in Paris, France. Traveling around the world, Howard has lent talents as a research assistant, marketing representative, freelance writer, teen speaker, blogger and global sales executive.

Howard is a recipient of a Royal Commonwealth Society award, an international youth writing competition. She is also a member of the Society of Children’s Book Writers and Illustrators.

Howard lives in New York with her husband, three children and one willful feline that she is convinced may have been a witch’s cat in a past life