Under The Never Sky Farewell Party: How NOT to Write a Love Triangle! @rossibooks Welcome to The Cover Contessa's leg of the Under The Never Sky Series Farewell Tour!
While I'm sad to see this series go, I'm so happy that I was able to come along for the ride!

The earth-shattering conclusion to Veronica Rossi's "masterpiece" Under the Never Sky trilogy and sequel to the New York Times bestsellingThrough the Ever Night (Examiner.com).
Their love and their leadership have been tested. Now it's time for Perry and Aria to unite the Dwellers and the Outsiders in one last desperate attempt to bring balance to their world.The race to the Still Blue has reached a stalemate. Aria and Perry are determined to find this last safe-haven from the Aether storms before Sable and Hess do-and they are just as determined to stay together.Meanwhile, time is running out to rescue Cinder, who was abducted by Hess and Sable for his unique abilities. And when Roar returns to camp, he is so furious with Perry that he won't even look at him, and Perry begins to feel like they have already lost.Out of options, Perry and Aria assemble a team to mount an impossible rescue mission-because Cinder isn't just the key to unlocking the Still Blue and their only hope for survival, he's also their friend. And in a dying world, the bonds between people are what matter most.In this final book in her stunning Under the Never Sky trilogy, Veronica Rossi raises the stakes to their absolute limit and brings her epic love story to an unforgettable close. 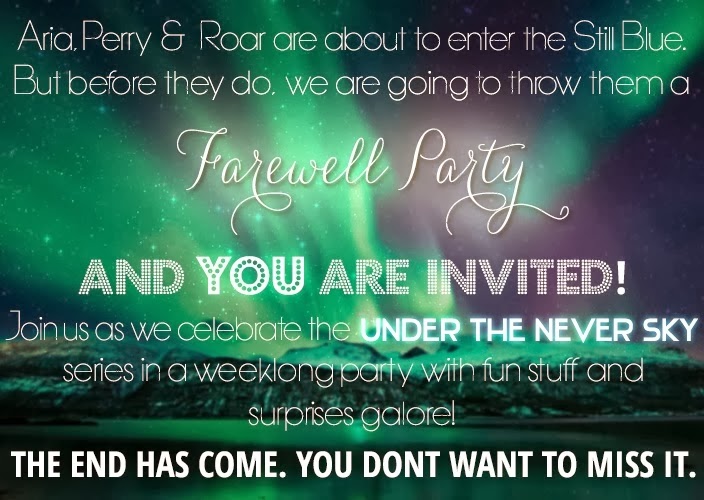 Today I'm going to tell you a bit about the best NOT love triangle that exists!

I want to talk Aria and  Roar. Why, you ask? Because they just happen to be the most well written “couple” in a YA series without the romance. If you were to ask me how NOT to write a love triangle, I would tell you to go talk to Veronica Rossi. Not only has she made us love Aria and Perry’s relationship, with their romance and swoon worthy moments, but she’s made us love the close friendship that has formed between Aria and Perry’s best friend, Roar. I think my favorite relationship of this series it theirs. I love their banter and the way they are able to bounce things off of each other. It's so great that they are able to be friends and Rossi did not introduce a love triangle. Go her for keeping it platonic and making us love them together at the same time!

I can tell you off the bat that Roar is my absolute favorite character in this series. He’s not only one handsome dude, but he’s funny and witty and just an all around great guy. His love for Aria, as a friend of course, is completely evident throughout the entire series. There is not one moment I thought Aria would turn her back on Perry and choose Roar. Quite the opposite, I thought Roar would make sure Aria and Perry would end up together no matter what. I think their relationship really stretches the boundaries of how a male and female character can interact and not worry about when their first kiss will be, or whether or not the other person likes them or finds them attractive. Roar’s heart is with Liv. But he is brutally loyal to Perry and Aria and will do anything to keep them both safe. He treats Aria as his equal.

There’s one scene in Into the Still Blue where Roar, Aria and Soren are in a  room together and Roar and Aria are bantering away. You can tell Soren is wondering just what the relationship between them is, and I do believe he actually says something about it to them. But despite what Soren might see as romance, you can tell it’s not. You can see it’s just extreme love and companionship between two friends who are focused on the same goal: keep their friends and family safe and do what they need to do to keep each other alive.

So, it is with tears in my eyes that I bid a farewell to Aria and Roar’s relationship. And I say with all my heart that every writer should read these books and find out just how not to write  a love triangle! Thank you Veronica Rossi, for this amazing series!

Want to see the rest of the farewell party? Click on the links below and enjoy!

Veronica Rossi's debut novel, UNDER THE NEVER SKY, will be published in over twenty-five international markets, starting on January 3rd 2012 in the United States. Film rights to the trilogy have been optioned by Warner Bros.
at 12:01 AM