You asked, and Toni Aleo answered!

Also, Toni is running a couple of giveaways in celebration of the release of BLUE LINES!


If you change your icons to BLUE LINES COVER, e-mail ToniAleoAssistant@gmail.com for your signed post card!

Plus, enter to win 5 signed paperbacks! 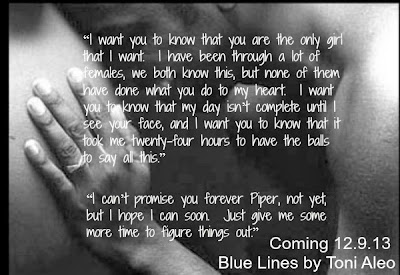 Don't forget -- If you post your review of BLUE LINES between December 9th - December 18th you could win some awesome prizes! Details can be found HERE. The Rafflecopter for this will be shared on Monday, December 9th.