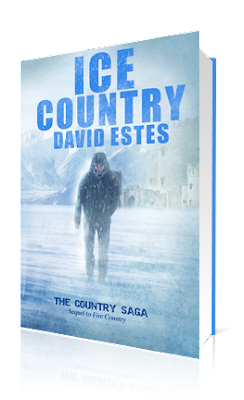 Dazz, a hard-edged, fun-loving Icer, likes fighting, particularly while at his favorite watering hole. However, while recovering from a particularly bad break up, his decision to engage in a brutal pubroom brawl leads to a series of events that thrust him into a dark and mysterious scandal involving King Goff, the ice country ruler.
When his seven-year-old sister is abducted in the dark of night, Dazz pledges to do whatever it takes to get her back, embarking on a quest that threatens to rip apart the very fabric that's barely holding his shattered family together.
Along the way he meets a group of unlikely allies in the form of a travelling group of fire country natives. Can Dazz, when joined with his best friend, Buff, and new tan-skinned friends, defeat the King and his guards before it's too late for his sister?
​


​
PRAISE FOR "ICE COUNTRY":
-"5 stars! David Estes creates captivating and original worlds that you love to get lost in!" Alexandria Theodosopoulos- Goodreads
-"Richly filled with new characters and story without leaving the old behind...a seamless transition into another side of a fantastic world." Kerri Hughes- Goodreads

The Cover Contessa's Review:
Um...amzaballs...awesome sauce...and whatever else I'm known for, David! I have to gather my thoughts to tell everyone about your wonderful book :)So, I'm going to be honest, it's been almost two weeks and I am still not sure how to even put into words how much I enjoyed this book; how much I enjoy David's writing and his stories. But I'm gonna try my hardest. Anyone who knows me knows that I have loved anything and everything I have ever read by Mr. Estes, so why should this book be any different, right? And I will tell you, when I received the email from David that contained the ARC, I did not wait to start it. I literally dropped everything I was doing to start reading it. I was that anxious to get into the thick of it!So, you know what I probably loved most about this book, besides the cover and the fact that David wrote it and he's just amazing, it was the fact that Mr. Estes took a different approach to writing a second book in a trilogy. He went off the beaten path and started a whole new story. Now, you might think, UGH, why in the world would he do that? I mean, we ended the last book when Siena and Circ had just gotten their HEA, right? But WAIT! It's well worth it because he starts a new story and then BOOM the world of Fire Country and Ice Country COLLIDE! And they do it in such a perfect way, with such a great reason and plot line, it's impossible not to love this story.So, you want to know what I think of this cover. Well, HELLO, I love this cover. Why do I love this cover, well, besides the fact that the amazing Regina Wamba designed it, it so perfectly puts me right in the mood to be in the middle of Ice Country. The cover immediately makes me feel cold and think about bundling up. And, what do you think it feels like in Ice Country? Think it's cold, well, take a look at the cover and you'll see! Plus it's so simple, the colors, the lone person on the front. It's just perfect.Dazz, well, what can I say. I totally and completely love this character. He's fun and witty. He's tough and loving. Most of all, he's compassionate and fiercely loyal. All such great qualities in a main character; in a main character that you want to end up loving (which I did). His voice is very different from Siena. I actually found that he seemed more educated, perhaps because he is older than Siena when the book starts. He has such a strong will, it's hard not to root for him and his cause throughout the book; to hope that he will get the ending he wants, the one you need. Plus, I just love books told from the male POV. I so rarely see them in YA, although the trend seems to be leaning towards putting more and more of them out there.All the characters in this book are well thought out and relatable. You really see a commitment to family and friends. And the development of each character is so easy to follow as they learn and grow and become more and more aware of the world around them.As with all his dystopian books, David has done some amazing world building here. I love his descriptions of Ice Country. They truly made me feel cold; I'm serious, I was shivering while reading about the winds, the snow, the icicles, and anything else you think about when thinking of a really cold place. I think I needed to go and get my sweater a few times just so I could continue reading! And when the world that he had built in Fire Country collides with Ice Country, well, you can imagine that things are kicked up 100 notches and the action becomes non-stop. Every fight scene, every scene where the characters are running for lives, is vivid, so much so I really felt as if I were right there in the thick of it with them!One of the things that I love most about David's books is his writing. David is so OCD that even his ARCs are pretty much perfect! I am not kidding. I could not really find any mistakes in them, at least none that distracted me from the story. And his descriptions, world building and character development are spot on. I really can't explain enough how much his writing literally pulls you through his books. I didn't want to put this down because I just love reading how his words jump and flow off the page.So, if I was so taken with this book why the 4 stars you say? Well, there is a bit of insta-love, which always kind of bothers me with any book I read. And the fact that the characters so easily evade several events (I won't get into it because I don't want to spoil it) that might put them in a precarious situation without injury just seem uncharacteristic of a dystopian setting. Do characters die, yes, they do. But I just expected more death and destruction, although I'm sure I would have been very unhappy had it happened! And, because I don't do half stars, I could not give this book a perfect score. But, if I were to do half stars, this would definitely be getting the 4.5 rating from me.So, do you want action, adventure, romance, and fun? Then you really need to pick this series up and see what amazingness David brings to the YA genre because I'm pretty sure there is no one I know that would be disappointed with reading his writing. Well played Mr. Estes, well played!


﻿Formats Available for Purchase: Paperback (only at Amazon) Kindle, epub and Smashwords.
﻿

Excerpt
​
It all starts with a girl. Nay, more like a witch. An evil witch, disguised as a young seventeen-year-old princess, complete with a cute button nose, full red lips, long dark eyelashes, and deep, mesmerizing baby blues. Not a real, magic-wielding witch, but a witch just the same.
Oh yah, and a really good throwing arm. “Get out!” she screams, flinging yet another ceramic vase in my general direction.
I duck and it rebounds off the wall, not shattering until it hits the shiny marble floor. Thousands of vase-crumbles crunch under my feet as I scramble for the door. I fling it open and slip through, slamming it hard behind me. Just in time, too, as I hear the thud of something heavy on the other side. Evidently she’s taken to throwing something new, maybe boots or perhaps herself.
Luckily, her father’s not home, or he’d probably be throwing things too. After all, he warned his daughter about Brown District boys.
Taking a deep breath, I cringe as a spout of obscenities shrieks through the painted-red door and whirls around my head, stinging me in a dozen places. You’d think I was the one who ran around with a four-toed eighteen-year-old womanizer named LaRoy. (That’s LaRoy with a “La”, as he likes to say.) As it turns out, I think LaRoy has softer hands than she does.
As I slink away from the witch’s upscale residence licking my wounds, I try to figure out where the chill I went wrong. Despite her constant insults, narrow-mindedness, and niggling reminders of how I am nothing more than a lazy, liquid-ice-drinking, no-good scoundrel, I think I managed to treat her pretty well. I was faithful, always there for her—not once was I employed while courting her—and known on occasion to show up at her door with gifts, like snowflake flowers or frosty delights from Gobbler’s Bakery down the road. She said the flowers made her feel inadequate, on account of them being too beautiful—as if there was such a thing—and the frosty’s, well, she said I gave them to her to make her fat.
She was my first ever girlfriend from the White District. I should’ve listened to my best friend, Buff, when he said it would end in disaster.

David Estes was born in El Paso, Texas but moved to Pittsburgh, Pennsylvania when he was very young. He grew up in Pittsburgh and then went to Penn State for college. Eventually he moved to Sydney, Australia where he met his wife and soul mate, Adele, who he’s now been happily married to for more than two years.
A reader all his life, David began writing novels for the children's and YA markets in 2010, and has completed 14 novels, 12 of which have been published. In June of 2012, David became a fulltime writer and is now travelling the world with Adele while he writes books, and she writes and takes photographs.
David gleans inspiration from all sorts of crazy places, like watching random people do entertaining things, dreams (which he jots copious notes about immediately after waking up), and even from thin air sometimes!
David’s a writer with OCD, a love of dancing and singing (but only when no one is looking or listening), a mad-skilled ping-pong player, an obsessive Goodreads group member, and prefers writing at the swimming pool to writing at a table. He loves responding to e-mails, Facebook messages, Tweets, blog comments, and Goodreads comments from his readers, all of whom he considers to be his friends.
​
Learn more about the author at: ​http://davidestesbooks.blogspot.com​

Remember to check BOOK 1 in "The Country Saga": Fire Country. 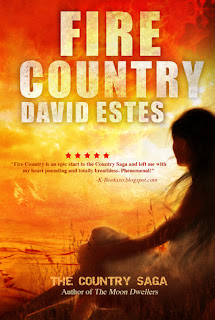 In a changed world where the sky bleeds red, winter is hotter than hell and full of sandstorms, and summer's even hotter with raging fires that roam the desert-like country, the Heaters manage to survive, barely. Due to toxic air, life expectancies are so low the only way the tribe can survive is by forcing women to procreate when they turn sixteen and every three years thereafter. It is their duty as Bearers.Fifteen-year-old Siena is a Youngling, soon to be a Bearer, when she starts hearing rumors of another tribe of all women, called the Wild Ones. They are known to kidnap Youngling girls before the Call, the ceremony in which Bearers are given a husband with whom to bear children with. As the desert sands run out on her life's hourglass, Siena must uncover the truth about the Wild Ones while untangling the web of lies and deceit her father has masterfully spun.