Today is a super exciting day for me! I get to show you the cover of J.R. Wagner's novella: Tristis Manor (A Never Chronicles Novella)! It's so gorgeous and I can't wait for this story! 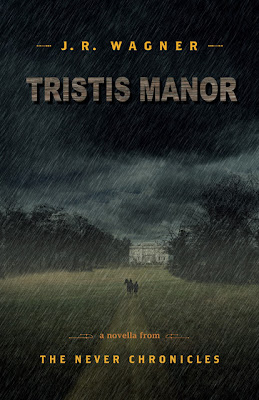 I am just loving this cover.
Here's what Josh has to say about the story:
Well, as promised, here is the cover for my upcoming novella.
The main character (not to be spoiled who it is just yet) is one of the characters from Exiled. The story is about his/her past.
I expect to release Tristis Manor in February if all goes according to plan.
I'm very excited about this story for many reasons.  One in particular is the genre stretches beyond fantasy.  A synopsis will follow shortly.
Thank you everyone for your continued support!
JRW

And have you not read his book Exiled (The Never Chronicles, #1)? Well, if you like Harry Potter and The Hobbit or Lord of the Rings, you are going to LOVE this book! 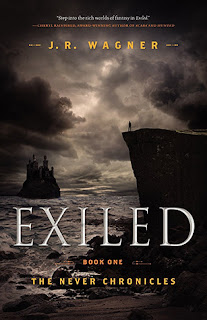 James has never known an ordinary life. As long as he can remember, he and his family have been on the run—moving from place to place, never settling down, never growing roots. Now, just when he’s on the brink of manhood, the very thing his family has been trying to prevent tears him from all he has ever known and thrusts him into a place where he is powerless and alone.
Bent on finding a way back, James must brave a place reserved for the worst of his kind. He quickly learns that the land itself poses a greater threat than its inhabitants and if he is to have any chance of returning, he must work with the very people he’s been raised to fear.
James has known magic since just after he was born. As a sorcerer, his skills are exceptional yet when he wakes in The Never, his abilities are gone. Armed with nothing but determination and the will to survive, he braves a land wrought with dangers, mysteries and temptations meant to ensnare both body and mind and prevent escape forever

You can see my review of this awesome book HERE
I know you want to read this now, right? So why not go buy yourself a copy so you'll be ready in February when Tristis Manor is released?