Have you heard of Ali Cross's AWESOME series Desolation? 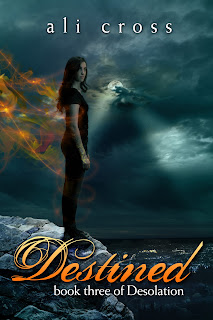 Choosing is a bad idea, because Desi always makes the wrong choice, and sometimes there are no do-overs. Certainly not this time, when all has been lost and Desi can’t even save herself, let alone her friends. For Desi, the hardest thing is letting someone help her, to accept their sacrifice on her\behalf. But that’s exactly what she’ll have to do in order to save the worlds from Helena’s destruction.
The goddess of Helheimer, long imprisoned by Desi’s father, Loki, is free at last, and she’s bent on reclaiming what once was hers. The nine worlds will be drawn into war, over Hell, over Earth, with innocent humans as meaningless collateral.
While Michael and the Gardians of Asgard, along with the golden-armored Valkyrie, lead the battle for freedom, it’s Desi who holds the destiny of all the worlds in her hands.
Can she set aside her doubts, once and for all, and claim the gifts that are hers to bear? Can she accept the sacrifice that is made for her and Become all that she was created to be?
Her final choice will define not only her future, but the fate of humankind, forever more.

Today, Ali has graciously agreed to do a guest post here on The Cover Contessa. So let's hear what she has to say in answer to my question:
If you could choose on G-d to be, who would it be and why?

The gods are pretty messed up, I think. They are bound by a set of archaic rules that no longer fit the worlds they created and yet they carry on as if nothing's changed. Even though they have a lot of power, I wouldn't want to be one of them.

If I could be any creature in the nine worlds, though, it would be a Valkyrie. They are fierce ~ fierce in love, loyalty, and in war. Plus, sometimes they get to ride the sh'lil--glorious golden winged pegasi.

Yep. I'd definitely like to be a Valkyrie! What about you? 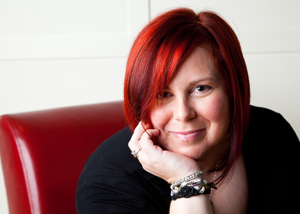 Ali Cross is the sensei of the writer's dojo where she holds a black belt in awesome. She lives in Utah with her kickin' husband, two sparring sons, one ninja cat, two sumo dogs and four zen turtles. Ali is the author of the Desolation series, a young adult paranormal romance about the kick-butt devil’s daughter and her search for a destiny of her own choosing.
Website: http://www.alicross.com/
Facebook : https://www.facebook.com/authoralicross
Goodreads: http://www.goodreads.com/author/show/5188441.Ali_Cross
Twitter: https://twitter.com/ali_cross
Google +: https://plus.google.com/108701847531782475259/posts?hl=en-US


Ali, thanks so much for stopping by today to tell us what G-d you would be! Great choice!
So, what G-d would you want to be and why?

Don't forget to fill out the Rafflecopter below to enter the giveaway!