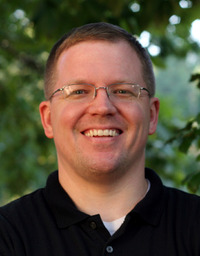 Today I am honored and excited to welcome blogger and author Chris Sorensen to my blog for Feature Friday. Please join me in welcoming him to my site!

Where were you born and where do you call home?

I was born in Petersburg, VA and I call Chesterfield, VA home (it’s a suburb of Richmond).

2 months and counting
What is the name of the book you most recently blogged about?

Besides my own...um...The Warrior Heir by Cinda Williams Chima

I’ll go with 4.5.  I love the cover! It’s what drew me to the book in the first place.  Simple, effective and intriguing.

If you could ask the author 3 questions about this book, what would they be?

1)    What made you choose soccer as the sport the main character played in the book?
2)    Was there a storyline, scene or character that you originally had in the book that your editor made you cut?
3)    If you could go back and change one thing about the story, what would it be?

Can you name a favorite scene from the book?

When Jack and his “opponent” have to fight at the end of the book in the tournament.  I saw it coming, but it was still satisfying.

What character did you like the most? The least? Why?

I will have to say, for as much as I found wrong with the book, I really did like the main character, Jack.  He was easy to understand and get along with, and his progression in the book made sense...I wanted to see him succeed.

My least favorite character was who I felt was the most underdeveloped (or just not well written) and it happened to be Jack’s “trainer”.  I wanted to like him and form a bond as he is teaching Jack to kick butt, but he had no personality.

Was this a series or stand alone? If it is a series, will you read the rest of the books?

Series.  The Heir Chronicles.  I might read the second book to see if it gets better, but I got my expectations WAY up for the book and then ultimately was disappointed.   But the book got better at the end, so...we’ll see.

Was this a review book or something you picked out to read? Do you think that influenced your review?

Something I picked out (because of the cover).  I would say yes, it influenced my review a little, in the sense that I was very excited to read it and was kind of let down.

What did you rate this book?

3 of 5 stars.  As I mentioned, I wanted to really like it, but I couldn’t connect with the characters.  The author seemed like she was trying too hard and had not spend much time around teenagers lately.  It did pick up at the end and made me want to finish to see what happened...hence the 3 rating.

Have you written a book yourself or are you planning to in the future?

I am currently working on a YA adventure/fantasy novel (with a little romance thrown in for fun)J  I like to think of it as “What if we could read about Joan of Arc’s family issues and boy troubles?”

The working title is MAIDEN.  I’m hoping to start shopping it to agents at the New Year.  Very excited about it!!!

What genre is your favorite and why?

Currently I am digging YA.  It appeals to me.  I love ‘coming-of-age’ stories that get right to the heart of the matter and give the characters room to grow.  I find that YA storylines usually meet that criteria the best.

If you were shipwrecked on a desert island what 3 books would you want with you and why?

On Writing by Stephen King truly changed everything I knew about writing...and ultimately changed me.  I would give anything to meet him one day and thank him for writing it and sharing so much personal insight.

About four months ago I was excited to hear that a local author had been picked up by a major publisher and had her first MG novel coming out this fall.  I have been extremely blessed to get to know Lana Krumwiede over the past few months and gain much hope and inspiration from her.  (Shameless plug: Her debut novel, Freakling, JUST came out last week.  You should check it out...it’s good!)

Do you prefer ebooks, paperbacks or hardcover?

Hardcover, then paperback, then ebooks (though I am becoming more of a fan of ebooks).

Where do you buy your books?

I’m a big ‘library first’ fan.  But if there is a book I really want, Barnes & Noble for brick and mortar and Amazon for online.
Have you ever read a book more than once? Which one and why?

Plenty.  One of my favorites that I will read every so many years is Harry Potter and the Prisoner of Azkaban.  Probably one of the most well told, character developed stories I’ve ever read.  The foreshadowing and payoff is amazing!
Do you prefer movies over books ever?

I’ll go with no...nothing is coming to mind.

What book are you currently reading and in what format (ebook/paperback/hardcover)?

What book are you about to start reading?

The book on deck is The Girl of Fire and Thorns by Rae Carson.  Everyone has said it’s up the alley of what I’m currently working on.

What book do you know that you will never read? Why?

Are there any new authors that have grasped your interest recently and why?

I’ve been impressed with Leigh Bardugo and Shadow and Bone.

Just the writing style.  The characters are easy to like and believable.  That’s the quickest way to my heart...unforced, natural characters.

Have you read a book that you would like to rewrite the ending of?

Actually, it would be one of my favorite books of all time, The Giver.  One of the best books ever written, but every time I read it I get so invested and so immersed to be let down at the ending.  I don’t know what I would change, but something more satisfying.  It doesn’t have to be “happily ever after-ish”, but not so vague; not after the book just put me through so much mentally and emotionally.

Do you like book trailers? Why or why not?

Not that I’m a connoisseur of book trailers, but I have seen my fair share.  Honestly, I don’t like them.  Usually I think we as readers can get the information we need from good jacket copy or from word of mouth.

1.     The three books in the Graceling series by Kristin Cashore (Graceling, Fire, Bitterblue) are all fantastic and colorful, and build on each other so beautifully!
2.     The Thief by Megan Turner.  The artwork is exquisite and the symmetry is flawless.
3.     And I LOVE the cover for Grave Mercy by R.L. LaFevers!  Tells a whole story by itself.  I probably also like it because it would be the perfect cover for the novel I’m working onJ

Where do you usually blog?

I blog all over the place.  The kitchen table, in bed, during lunch at work, while I'm driving (oh wait...I promised myself no more blogging while driving).

Do you have any pet peeves?

Being late…I can’t stand it.  Also have an issue with people who don’t have the social sense to know it’s time to stop talking.

How often do you blog?

Every day.  I have an interactive blog series called ‘Sentence to Start’ where readers submit what they consider a GREAT opening sentence to a story.  We randomly select 10 of them for readers to vote on.  The top 3 I use as writing prompts and make a short story on Mondays, Wednesdays, and Fridays.  The sentence that gets the most votes each week wins a gift card to Amazon.  It’s fun and gets readers involved.

There’s also ‘Tips on Writing Tuesday’s’ and ‘Through the Shelf Thursdays’.

How many books do you read in a month?

I keep track of my reads and reviews on my GoodReads page.  My reading goal is 1 book every two weeks.

How do you organize your books?

With 5 kids at home, I’m happy to be able to find any of my booksJ

What is your favorite color?

Yellow – it is bright and cheery.  I like to think it reflects my attitude.
What are 5 items you never leave home without:

What is your most favorite electronic gadget?

I spend most of my time on the computer, but I would say that my favorite electronic gadget is the TV (hopefully after Christmas it will be an iPad that Santa brings me)J

And I’ve really only got one...

Nymphadora Tonks.  I think it’s the pink hair that won me over!

Is there a character you love to hate?

Severus Snape!  He is, without a doubt, one of the greatest characters ever written.  Mean, self-centered, arrogant, but oh so tortured and we can’t help (eventually) to feel nothing but sorrow for him.

What is your favorite food to eat?

I’ll go with Chinese.  I don’t know who General Tso is, but he makes some yummy chicken!

What is your favorite TV show? Movie?

What are you most fearful of?

Ooh, that’s a good one.  Um…I would say drowning.  The thought of drowning just plain terrifies me.

Where can we STALK you?

Thank you so much for taking the time to do this interview with me and allowing us a glimpse into your blogging world.

Brooke, this has been so much fun.  Thanks for having me!


As a bonus, Chris has offered up a little giveaway! Go on over to his site, C Sorensen The Official Site of Author Chris Sorensen, to enter to win a $10 Amazon gift card, no strings attached.
at 3:01 AM