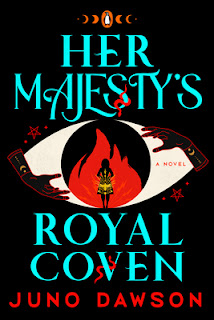 A Discovery of Witches meets The Craft in this the first installment of this epic fantasy trilogy about a group of childhood friends who are also witches.

If you look hard enough at old photographs, we're there in the background: healers in the trenches; Suffragettes; Bletchley Park oracles; land girls and resistance fighters. Why is it we help in times of crisis? We have a gift. We are stronger than Mundanes, plain and simple.
At the dawn of their adolescence, on the eve of the summer solstice, four young girls--Helena, Leonie, Niamh and Elle--took the oath to join Her Majesty's Royal Coven, established by Queen Elizabeth I as a covert government department. Now, decades later, the witch community is still reeling from a civil war and Helena is now the reigning High Priestess of the organization. Yet Helena is the only one of her friend group still enmeshed in the stale bureaucracy of HMRC. Elle is trying to pretend she's a normal housewife, and Niamh has become a country vet, using her powers to heal sick animals. In what Helena perceives as the deepest betrayal, Leonie has defected to start her own more inclusive and intersectional coven, Diaspora. And now Helena has a bigger problem. A young warlock of extraordinary capabilities has been captured by authorities and seems to threaten the very existence of HMRC. With conflicting beliefs over the best course of action, the four friends must decide where their loyalties lie: with preserving tradition, or doing what is right.Juno Dawson explores gender and the corrupting nature of power in a delightful and provocative story of magic and matriarchy, friendship and feminism. Dealing with all the aspects of contemporary womanhood, as well as being phenomenally powerful witches, Niamh, Helena, Leonie and Elle may have grown apart but they will always be bound by the sisterhood of the coven.
Title: Her Majesty's Royal Coven
Author: Juno Dawnson
Publisher: Penguin Books
Expected Publication Date: May 31, 2002

I want to thank Penguin Group/Penguin Books and NetGalley for approving me to read this ebook and offer my honest opinion.

This is my second Juno Dawson book. I read my first one last year and adored it. I love her writing because it flows well but more than that I adore the wit she weaves into her stories. Plus, who doesn't love a good modern witch story with characters who are good and bad, fun banter between friends, and a tense story line that has you hanging on to your seat until it's done?

I will say at the beginning I had a bit of a hard time getting into the story. I'm not sure if it is because I'm not British or I just wasn't in the right frame of mind. I also felt a bit like this was not the first book about this coven. The beginning made it feel like there was a back story I had missed. I want to chock this up to poor world building in a book that is a modern fantasy. It made it hard to understand where the characters were coming from.

Once I got about 30% into the book, the story took better shape, despite the absence of world building.

The four points of view really helped to solidify the different type of witches these ladies truly are. It helped you to solidify a dislike for one of the characters in particular, which I know was how the author wanted to present her in the story. You were meant to totally dislike her up until the very end. The other three witches are absolutely wonderful to get to know.

This book definitely brings forth many societal issues. The author presents them directly, in a no bones type of way. Completely straight to the point without holding back. It made the impact of these issues more relatable and understandable. She did a good job pointing out the discrimination that occurs as a result of the different lifestyles people lead. I do wish she would have chosen one issue to focus on as having so many made the book feel forced in nature.

Overall, it's obvious the author had one idea in mind for this book: tear down "norms" because they no longer exist as many have always thought they were. But I think she could have done a better job incorporating some world building to help set the tone a bit better.

Queen of Teen 2014 Juno Dawson is the multi award-winning author of six novels for young adults. In 2016, she authored the best-selling World Book Day title: SPOT THE DIFFERENCE.Her next novel is the beautiful and emotive MARGOT & ME (Jan 2017) which will be followed by her adult debut, the memoir THE GENDER GAMES (Jul 17).Juno also wrote the bestselling non-fiction guide to life for young LGBT people, THIS BOOK IS GAY. In 2016 a follow-up, MIND YOUR HEAD, featured everything a young person needs to know about mental health.Juno is a regular contributor to Attitude Magazine, Glamour Magazine and The Guardian and has contributed to news items on BBC Women’s Hour, Front Row, ITV News, Channel 5 News, This Morning and Newsnight concerning sexuality, identity, literature and education.Juno’s titles have received rave reviews and have been translated into more than ten languages around the world.Juno grew up in West Yorkshire, writing imaginary episodes of Doctor Who. She later turned her talent to journalism, interviewing luminaries such as Steps and Atomic Kitten before writing a weekly serial in a Brighton newspaper. In 2015, Juno announced her intention to undergo gender transition and live as a woman.Juno writes full time and lives in Brighton. In her spare time, she STILL loves Doctor Who and is a keen follower of horror films and connoisseur of pop music. In 2014 Juno became a School Role Model for the charity STONEWALL.