Check out my stop on the blog tour for Where Angels Can't Follow by Jessi Kallison! 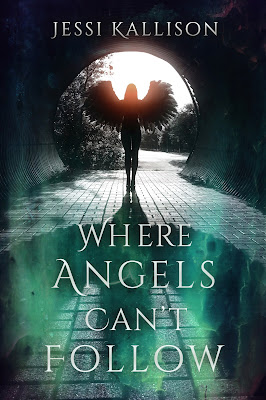 Where Angels Can't Follow
by Jessi Kallison
Genre: YA Fantasy
Release Date: September 22 2020
Summary:
It all started with an inexplicable slab of marble.And now I can’t get her out of my head. It’s more than inspiration. It’s compulsion.I see her in my dreams. And I wake up covered in marble dust, her statue more complete in front of me.I can’t stop sculpting, and I can’t save the angel girl.Now iconoclasts, a quartet of archangels, and a voodoo queen—along with the plague of little old ladies running my life—are all far too interested in the outcome.I miss normal New Orleans. (Yeah, I said it.)But there’s no going back until I free her and get the literal heavenly host out of my life. And maybe there’s no going back then.

There’s a slightly creepy and definitely weird piece of art on my wall. The print caught my eye at a local festival a few years back, and I bought it because it intrigued me.

My kids hated it when I hung it on the wall, but my tastes haven’t gotten less eclectic since. (Sorry, not sorry, nerdlings.)

I obsessed over the details. I wondered why the angel woman was headless and whose much larger hand was on her stomach? Was he human? Another angel? Why was he touching her at all? Was the owner of that hand a good guy? Why would she be a statue? And why would she be a headless statue after that?

I don’t know the real story. But my brain wouldn’t let go of the image and decided to start making up its own story that began with an angel statue. And Where Angels Can’t Follow was born.

About the Author
As a devoted bibliophile and die-hard sci-fi/fantasy fan, few of Jessi's friends were surprised when she began writing her own novels. After completing her Master's in English, she briefly taught college courses until she realized adjuncting is madness. After a brief timeout to raise nerdlings, Jessi wrote Iron Shards. And her latest books--Where Angels Can't Follow and Hell and High Water--will be released this fall. In her free time, Jessi explores and maps caves in the Southeastern United States and, of course, catches up on the latest good reads.
Website: https://jessikallison.com/
GIVEAWAY:
a Rafflecopter giveaway
at 5:11 PM