Check out my stop on the blog tour for Selected by Barb Han from Entangled Teen! 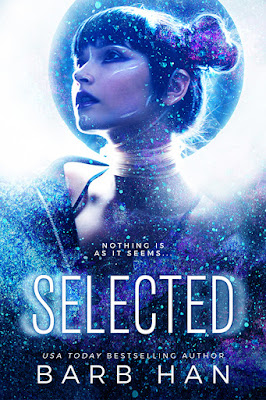 After a polarized nation was broken by the threat of civil war, States have now become countries. And in New Maine, things have gotten worse.

Giving my family a better life is everything. And my selection to attend an elite prep school suddenly offers my family a dramatically different life—food on the table, a roof over their heads, and a fighting chance at a future.

Everything is going great until some of my friends begin ghosting me, and then disappear. Soon it becomes clear this “chance of a lifetime” isn’t the Holy Grail I was promised. And the attention from one of Easton’s elite has me questioning why a boy with a golden future wants to risk it by being seen with me.

But when I find out why I’m really at this school, I may have to trust him if I want to live.

Adalynn tugs me away from the crowd and then spins around to face me. To her credit, she’s not bothered by the grades anymore. She never holds mine against me. “Okay, don’t look but he’s standing at two o’clock and staring right at you. This is like the gazillionth time this semester.”
“No way. He is not.” My heart trills in my chest anyway and my cheeks burn with embarrassment. I risk a glance as he snaps the rubber band around his wrist. He’s done it before when he’s nervous, but it happens so fast that I doubt anyone else ever notices. A flicker of emotion—uncertainty?—passes across his features before he regains his casual demeanor.
I blame test grades. I tug down the sleeve of my sweater, the last gift from my brother, over the burn mark covering my left forearm. No matter how hot the weather, I always wear long sleeves. The couple who sponsors me almost canceled their application when they saw my arm. I guess they thought it was some kind of deformity but it’s just a burn. Like I said, people freakout over the smallest imperfections.
This whole program is new. I’m part of the initial group of five who started together freshman year. Our numbers have grown to fourteen. Thirteen, now that Lillian is gone.
“Oh, crap, he’s walking over here,” Adalynn says with huge blue eyes that look like a bug’s on steroids. “Told you he likes you.”
“Whatever you do, don’t leave me.” I turn to glance down the hall to see if she’s playing some kind of twisted joke. I swear I can feel my heart pounding in my throat whenmaking a beeline in my direction. His eyes lock onto mine.
I might throw up.
His hair parts to one side and it feathers effortlessly. His hair is a little longer than school code allows but his family has plenty of money to smooth over that little road bump. For most people, the prep school is strict. Not so much for Legacies. And especially not for Caius Fitch. He’s different.
If rich had a galaxy, his family would be a comet soaring far above it. But it’s more than that. He’s the only Legacy smiles at me in the hallway. We had English together last year. He didn’t speak up much, but his answers were always thoughtful when he did, not like the others who were more interested in getting a laugh than in paying attention. I was teacher’s assistanthere were a few times he hung around after class like he was waiting to talk to me after I finished erasing the chalkboards and tidying up the room, but he never did.
He’s been early to pick up his younger sister for the past few weeks and I’ve seen him in the halls of the dance building. If he’s coming this way, he must want something. Maybe he saw my grade and wants to hire me for tutoring. I get requests like that all the time.
I half expect him to duck into a hallway before he reaches me. He doesn’t. And now I panic. At least my friend is still here.
“Adal—” I stop mid-word. She’s gone.

About the Author
BARB HAN is a USA TODAY, Publisher's Weekly, and Amazon Bestselling Author. Reviewers have called her books "heartfelt" and "exciting."

She lives in Texas--her true north--with her adventurous family, a poodle mix and a spunky rescue who is often referred to as a hot mess. She is the proud owner of too many books (if there is such a thing). When not writing, she can be found exploring Manhattan, on a mountain either hiking or skiing depending on the season, or swimming in her own backyard.

Sign up for Barb's newsletter or to receive a postcard for her new releases at www.BarbHan.com.