Check out my stop on the blog tour for the upcoming anthology, From Ashes to Magic! 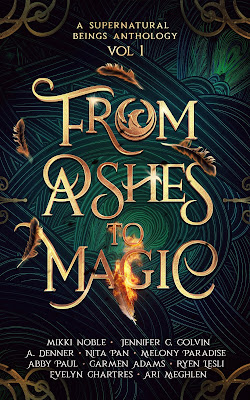 
It’s when they creep out of the shadows that you should beware. The good ones will hold your hand when you’re having a nightmare; the bad ones BECOME your nightmare, seeping into your very soul and burrowing in the darkness until they’ve completely taken over.
Ten authors. Ten stories. Many supernatural beings you’ve come to know and love.
Once you plunge into these pages, you won’t want to leave.
*****
REBIRTH A. Denner
Immortality always comes with a sacrifice. But how can Nova finish the deed when her Prey is the only one that can save her?

GABBY’S FUTURE Mikki Noble
A future-telling tree offers Gabby an unpromising future she must try to change. Will that change make things better or worse?

LIFE AND DEATH Nita Pan
Brimming with love and betrayal, the courtship between two gods explores what it means to have humanity. Is the divine romance between Life and Death doomed from the very beginning?
CHOSEN Jennifer C. Colvin
Stolen away to the Philippine Underworld by a mysterious goddess, dutiful and meek Bituin, a young girl from a small hidden mountain town on Cabu Island, discovers the gods have chosen her as a Babaylan (shaman). Newly imbued with powers beyond her wildest imagination, Bituin’s spiritual awakening sends her life into upheaval and rocks the foundation of her quiet town.

BROKEN PROMISES Evelyn Chartres
A young woman finds herself isolated from all she knows when her home is set ablaze. Despite insurmountable odds, she must risk traversing unfamiliar and hostile territory to find help, or declare her life forfeit.

CAN YOU KEEP A SECRET? Carmen Adams
Palkar Village is a bloodthirsty place for those of the supernatural, and after years of senseless persecution the Sorcerer community sought refuge elsewhere. For decades the Earth Sorceress Alina lived peacefully among her kind in a deep forest until one night of magic changed her world. The Sorcerer community lived in secret tranquility for decades…but would things stay that way?

HAVENLESS Ryen Lesli
Bitter Regret creates beautiful betrayal in Havenless. In the fall of 1513, the ebb was torn apart by the tragic love story of Torr and his Witch, Nahlia. Murdered by her own twin, Nahlia’s lost spirit roams the Haven clan, leaving Torr with a broken heart, fighting against the shocking betrayal that stole everything from him. A betrayal that will echo through time.

SULFUR NIGHT Abby Paul
Cursed. Tainted. Marked. The children born on the sulfur night aren’t like the rest of us. They can serve only one purpose. Perhaps the new gods are as blood thirsty as the old.

THE LOCKSMITH Air Meghlen
For Cara, a non-magical human, in a world of magic, picking locks is how she makes a living. Her quiet life is threatened when a mysterious traveler brings her a complex lock that makes her the target of a powerful enemy.


The only way to hide from a Fae king is to live among humans—as a human. Can Izbella Rane have the normal life she wants, or will she be forced into a world her family fled from?

A football zipped past my head, circled around my mother, and followed my annoying brother out of the kitchen, narrowly missing the antique cookie jar. His high-pitched laugh pierced my ears even after he’d vanished into the living room. I rolled my eyes at my mom and swiped a finger across the lopsided chocolate cake she was frosting.
“You should’ve left the glamour binding on him, Mom,” I said, stuffing my frosted finger into my mouth as she swatted at me with the spatula. “Do we really have to wait to take my binding off? I’m so tired of being ordinary!”
“Yes, Izzy,” she said, sighing. “You know we must wait until the actual time of your birth in Faeloria, and that isn’t until ten twenty-three tonight. Now, if you ask me again, I’ll make you wait—indefinitely.”
I slumped back from the island counter, arms crossed, and pouted. Mom smirked and winked at me, turning to wash the dishes she’d used to bake my birthday cake.
“I’m going to be eighteen—an adult!” I slapped my hands down on the counter and growled. “I’ll be able to drop my glamour whenever I want, and use my magic, whatever it is.” I let out a loud, exaggerated sigh aimed directly at my mother.
Mom turned around to cock an eyebrow at me while drying her hands with a dishtowel. “You’ll be fourteen, little miss. The age of majority for Fae, yes, but that doesn’t make you an adult. Being mature and responsible with the magics, and as a person, makes you an adult. Once the binding comes off, you’ll feel different, more powerful. That can go to your head. Don’t make us regret this.”
“I’ll be more responsible than Kye was after he got his magic.” I huffed a little laugh and shook my head. “You remember when he went to his football game without his glamour on?”
“It’s a good thing his natural coloring is the same as the high school colors.”
We giggled, remembering how we watched my brother walk onto the football field with blue skin and green hair. Luckily, he played it off as a prank and danced around the field with the mascot.
“I invited Bren, by the way.” I smirked, knowing that would push her buttons. Being a teenager was fun sometimes.
She shot a glare at me. “Izbella,” she said hotly, wagging a finger at me, “you get to kick him out after cake then. You know he can’t be here when we perform the unbinding.”
I rolled my eyes. “Fine. But I wish I could tell him about us. I hate keeping such a ginormous secret from my best friend.”
Mom came around the island and wrapped an arm around my shoulders. “I know, sweetheart, but he’s human. We can’t let humans know we exist. If it got out, the king could find us and force us back to Bilora, or worse, turn us into the Prime Fae. Then we would have to live the rest of our very long lives in the worst prison of Faeloria.”
It was difficult to really understand what she was saying. My parents had lectured us so many times about the dangers of our home world, but they were just stories of a land I’d never seen.
The Prime Fae governed Faeloria from afar as they sat in their ivory towers, turning their noses up at most of Fae kind. They let the regions rule themselves but stepped in only when they deemed it necessary. Unfortunately, forced betrothal was beyond their purview.
“I know, Mom. Being the Vex Fae princess would be almost as bad as centuries in a Fae prison.” I sighed. “I know, without a doubt, that Bren would keep our secret, but I won’t tell him. I swear.”
Leaning away from me, Mom nodded and gave me a tight smile. “Good. Your father and I will never let anyone force you to marry into that vile family and live amongst the immoral Vex Fae.”
I stood and hugged my mom. She kissed my forehead and pushed me towards the living room. At the doorway, I glanced over my shoulder at my beautiful mother, with her pale blue skin and shimmery, turquoise hair, putting away dishes in the cozy kitchen.
“I’ll keep all of our secrets,” I muttered to myself, “as long as I don’t have to be ordinary anymore.”

I knocked on the only red door on the block like I had so many times over the years. Inside was the only family I had known in almost a decade, the only family I wanted. Once they learned who I really was, I wondered if they would welcome me into their home as readily as they do now.
A boy with azure skin and spiky, emerald hair poked his head out the door, peering around exaggeratedly. “I don’t see anyone.”
Lavender arms pushed him away and yanked the door all the way open. Izbella Rane grinned at me with a silver mane draped over her shoulder, completely unaware that I could see through the glamours that she and her family wore to hide from the humans.
“Come in,” she ordered, grabbing my arm and dragging me across the threshold. “Dinner isn’t here yet. Dad went to get sushi and pizza.”
“You are so weird, Izzy.” I laughed as she pulled me into the kitchen. “Who asks for sushi and pizza for their birthday dinner?”
“Only my sister, the biggest dork around, would want to ruin a perfectly good pizza dinner with nasty sushi.” Kye spun his ever-present football a couple inches above his fingertips. Izzy swatted at it, giving her brother big eyes. I turned away, pretending I hadn’t seen her brother using his levitation magic.
Neela, Izzy and Kye’s mother, gently separated the squabbling siblings. “Kye, please set the table.”
“Just because it’s your birthday doesn’t make you any less of a dork, Iz.” He backed out of the kitchen, football spinning over his hands carelessly.
I kept my eyes on Izzy, feigning ignorance.
“Uh,” she stuttered, flustered and flushed with dark purple cheeks, “check out the cake Mom made. Chocolate. My favorite!”
“Mm, you know I like chocolate cake.” I sat at the kitchen island and gave Neela a little wave.
“How’s your mom?” she asked.
The Rane family had basically adopted me after I’d spun a tale of being raised by a single mother who worked nights and long hours, leaving me to raise myself. I’d used my magic of persuasion, along with their misconceptions of humans, to help them accept my story. Being the human they thought I was, they never questioned me.
“She’s fine. Working hard like always.”
“Well, you be sure to take a piece of cake home to her. She deserves a treat.” Neela winked and smiled sweetly at me.
“I will, Mrs. Rane. Thanks.”
“What did you get me for my awesome eighteenth birthday?” Izzy grinned, her slightly elongated teeth shining at me.
“I, uh, have a special gift for you,” I said nervously, “but I want to take you out to dinner tomorrow and give it to you then.”
Her smile faltered, but she turned quickly to look at her mom. “Oh, okay. That sounds like fun. Things will look different tomorrow anyway. Better.” She nodded sharply.
“Why?” I knew she wouldn’t tell me, but I asked anyway.
“Oh, uh, well, I’ll be an adult tomorrow, you know? I’ll be looking at the world with grownup eyes.” She pointed at her eyes and grinned again. “Give me a hint?”
I froze. Izzy and Neela were both looking at me expectantly, and I had no clue what to say.
“Brenny and Izzy sittin’ in a tree,” Kye sang loudly, then made wet smoochy noises and bonked us on the heads as he walked past us to the fridge. He leaned in, humming the rest as he scrounged through the contents. I bit my tongue and stared forward, watching Izzy out of the corner of my eye.
“Shut up, dolt!”
“Time for dinner,” Lero, Izzy’s father, yelled from the front door.


With a nervous smile, I watched Izzy as she helped her mom serve up pizza and sushi. It would only be one more day. I could wait one more day to tell the girl that I loved the truth about who I am. I just hoped she wouldn’t hate me after she learned I was the reason her family fled our world.