BlogTour: 15 Days With You by Ara Grigorian

Check out my stop on the 15 Days With You blog tour! Don't forget to enter the giveaway before you go! 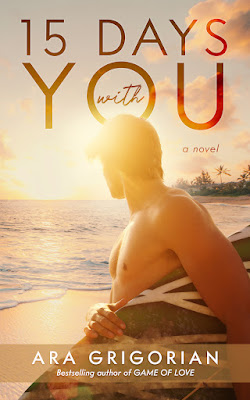 “Filled with tumultuous emotions of grief, romance, guilt, secrecy and anger, 15 Days With You is an accomplished work of drama sure to be enjoyed by audiences of all ages.” 5-Star Review, K.C. Finn for Readers’ Favorite
A mother’s dying wish. A son in search of answers. A fifteen-day surf odyssey with the California girl who will dare him to rethink everything.

Alone after his mother’s unexpected death, seventeen-year-old Shep leaves Texas to crash with his uncle’s family in Malibu. Before he can hang his cowboy hat, Shep learns something that blows his mind—in her youth, his hard-working single mom was a gifted surfer on her way to international fame. And her dying wish was for him to recreate the surf tour she completed when she was eighteen—the summer she got pregnant with him.

Along with his cousin Carmen (the red-blooded competitive surfer) and her best friend Samantha (the opinionated and mildly annoying beach goddess), Shep hits the road for a surf trip up and down Pacific Coast Highway. Armed with his mother’s ashes and fifteen sealed envelopes—each containing a page from her high school diary—Shep will discover a new side of the complex woman he’d only thought of as Mom, and might finally learn the identity of a man he’s never met—his father.

But each time he paddles out into the waves, a nagging question haunts him—the one he may not be ready to answer: Is he learning to surf because he wants to honor his mother’s dying wish, or running from the real reason he can’t go back to Texas—his own terrible mistake?

Carmen and I snatch one more wave and ride it to the sand.
“I’m spent,” Carmen says as we grab our boards and splatter our way toward Shep, who has been lounging, watching us the whole time.
“Hope you enjoyed the show,” I say as we reach him, nearly hovering over him, dripping saltwater all over him.
“Stop that,” he says and rolls away from us.
Almost in unison, we both whip our hair toward him, sending a spray of water bullets.
“What’s the matter with you two?”
“We’re hungry,” Carmen says. “And all you’re doing is taking a nap while you could’ve been making us breakfast, or lunch, or whatever.”
He adjusts his hat then grabs his chair and bag. “I feel used,” he murmurs.
“Welcome to day one,” I say.
He eyes me then heads toward the wooden steps that will lead us back to the campground.
I catch up to him. “What did you think?”
“What? Of the surfing?”
“No, of the seagulls.”
“It’s whatever,” he says.
I bump him. I grab his hat and place it on my head. Serves him right.
“It’s a fine sport, but a bit slow for my taste.”
“Slow?” Carmen and I yell at the same time.
“What are you even talking about? We were smokin’ out there,” Carmen says.
“Once you were on the wave, sure. But until then… man, it took forever.”
“He’s a football player,” I explain to Carmen.
“Oh, I see,” she says.
He pauses and looks at both of us. “And what’s that supposed to mean?”
“It’s not your fault.”
His jaw opens more. “Are you calling me dumb?”
“No, no. Just ignorant.”
“What the—?”
“Ignorant about what makes surfing the most addictive sport known to mankind.”
He relaxes his shoulders. “Let’s hear it.”
As we stroll to the camper, I momentarily visualize the board under my feet and allow the words to come naturally. “Surfing is a relationship, a connection with the water. It’s about floating on a board, bobbing with the motion of the ocean. It’s about being one of the few, while the many on the coast stare at us, clueless. They don’t know that we’re reading the wind and the water. We’re feeling the adrenaline of the waves and how the formation of the sea floor causes the water to behave differently. We’re experiencing the flow of energy rolling through the water.
“Then there’s the relationship with the wave. An innocent swell transforms into a tower. We have an understanding—the wave will challenge us to feel her, to adjust with her. And if we respect her, if we hear what she’s trying to tell us, then maybe she’ll let us stay for a while longer.
“But we never forget who’s in charge. This is a glorious, miraculous sport with a dark side. She can take you down and hold you down and split your board and your back. She won’t even shed a tear. She’ll move on and forget you were ever even there.”
We have reached our RV. He’s just staring at me.
“Football is a fine sport. You have to be an exceptional athlete to play it, I’m sure.” I slide my board on the rack then turn to him. “But to surf is divine. It’s reserved for the extraordinary.” 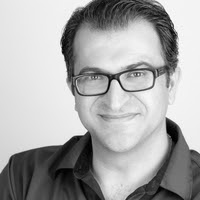 About the Author
Ara Grigorian is the international award-winning author of GAME OF LOVE, his debut novel. He is a technology executive in the entertainment industry. He earned his Masters in Business Administration from University of Southern California where he specialized in marketing and entrepreneurship. True to the Hollywood life, Ara wrote for a children's television pilot that could have made him rich (but didn't) and nearly sold a video game to a major publisher (who closed shop days later). Fascinated by the human species, Ara writes about choices, relationships, and second chances. Always a sucker for a hopeful ending, he writes contemporary romance stories targeted to adult and new adult readers.

Ara is committed to helping writers tell better stories. He is the co-founder of the popular Novel Intensive seminar. Also, he is a workshop leader for the Writer's Digest Novel Writing Conference, the Santa Barbara Writers Conference, and the Southern California Writers' Conference (both Irvine, CA and San Diego, CA). Ara is an active member of the Romance Writers of America and its Los Angeles chapter.


He is represented by Stacey Donaghy of the Donaghy Literary Group.