Check out my stop on the Einstein's Compass: A YA Time Traveler Adventure by Grace Blair & Laren Bright blog tour! Don't forget to enter to win an e-copy or audiobook before you go! 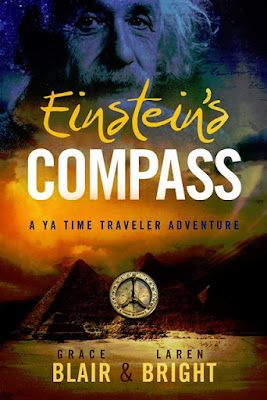 How did Albert Einstein come up with his wondrous theories of light and time? In Einstein's Compass: A YA Time Traveler Adventure, a young Albert is given a supernatural compass that allows him to travel through time and space, and find wisdom in other dimensions, including the lost city of Atlantis. But evil forces seek the power of the compass, including a monstrous, shape-shifting dragon from a different age. Can the compass protect Albert from such villainy?

had washed up on the shore of his hideaway cove. For the

new form and new powers. He had begun to develop a

healthy respect for his strength and the seeming

indestructibility of his body. He had come to grips with

the realization that there was no going back.

Truth be told, he was beginning to think he wouldn’t

have wanted to go back even if it were possible. He had

not been appreciated. Neither his uncle Thoth nor his

twin, Arka, had ever recognized his promise. “If only Ar-

ka had let me practice the mystical arts with him, I would

have shown him what I could do. Fool! It’s his fault I am

here,” Raka muttered to himself.

The day before his meeting with the Council, reflect-

Arka pointed to the container on the counter. “Where

were you today? You were supposed to take the ruby crys-

tals to the Temple of Healing. We had to cancel the

treatments when they did not arrive.”

Raka petulantly stared at the ground. “Something im-

portant came up.” Then he looked up at Arka defiantly.

“But I told Prensa to take the crystals to the temple. It’s his

fault the treatments were canceled, not mine.”

Arka frowned. “Prensa? He is our cook, not your servant.”

cuse, then changed course. “The temple guard said he saw

you walking with a female member of the Belial Brother-

hood near the gardens. What were you doing there with

“She wanted to know what we did in the Temple of

Healing,” Raka lied. “I showed her around the temple

grounds.” That wasn’t all I showed her, Raka thought to

himself with a lascivious smirk.

Arka could only shake his head in resignation.

him crashing back to the present. “I am meant to do im-

portant things, not just be an errand boy!” he shouted at

the rock walls of the cavern.

With thoughts of revenge seething in his mind, he

snatched at a rat that had the misfortune to scurry past. It

was the first sustenance he’d had since the transfor-

mation—he hadn’t really been hungry. He angrily tore a

leg off and took a bite, the first food he’d had since changing

form. As he swallowed, he felt something a transfor-

scales on his arm. Raka stopped chewing and watched the

shift. He was a changeling, he realized, but the transfor-

mation didn’t end with his dragon form. Tossing the still

squirming rat aside, he plucked a beetle off the cave wall

and bit down on it with a sickening crunch. A moment

later, his skin began hardening into a chitinous shell.

Concentrating, he found he was able to control, or even

halt, the changes to his structure.

The thought of changing into other forms intrigued

him. His mind flooded with information he had learned

in his healing energy classes. Raka felt something else as

he sorted through what was happening. It was a sort of

knowing, an intuition. Could be this be from the dragon

DNA he had ingested? He thought back over his

He discovered that his eyes were now acutely sensi-

tive. He could see in total darkness and normal light. His

memory, too, had sharpened. He could repeat his entire

meeting with the council verbatim. His memories were

much more vivid. He recalled his rage at his uncle and

brother and felt it with new intensity. In fact, he could

muster no feelings of compassion or love at all. Glancing

at the writhing rat whose leg he had bitten off, he studied

its suffering. This excited his killing instinct. It took an

effort not to inflict further pain on the creature. He craved

more of the rat’s blood, and he speculated that human

blood and organs would be a delicacy. A burst of intuition

revealed that eating an entire human body and drinking

its blood would transform him into a doppelganger of

that person. He would have to test out how long this

would last, but he suspected it would hold until he decid-

ed to take on another form.

As he discovered more of the strengths his new form

provided, Raka reveled in the thought that he had nothing

to fear. Then, an ancestral memory—perhaps connected

to his dragon DNA—flared in his mind. He saw many of

his fellow reptiles trapped in a burning structure, writhing

in agony. Fear welled up in him at this vivid memory. He

had at least one vulnerability: fire. Raka tore himself away

his trembling body. “Enough wasting time on what I fear.

Arka and his ilk.” That is the task worthy of my new,

transformed self, he thought. 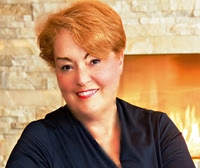 About the Author
Grace Allison Blair is an award-winning self-help and motivational author, and podcast host, who has assisted thousands to find their spiritual wisdom to solve everyday challenges.

Throughout her adult life, Grace became a serious student of the spiritual. She found that, often, psychological principles and practices were incomplete, but could be filled out by adding the missing spiritual component. Her approach was always to see practical applications for what she uncovered in the mystical. It was through immersing herself in this field of study and experience that she came up with her idea for her book, Einstein’s Compass.

Grace is a successful award-winning author, modern mystic, wellness consultant, business development advisor, marketing coach, and workshop facilitator. She has faced many life challenges, including life-threatening disease, and used what she encountered as a stimulus to gain greater happiness and fulfillment.
Author Links: