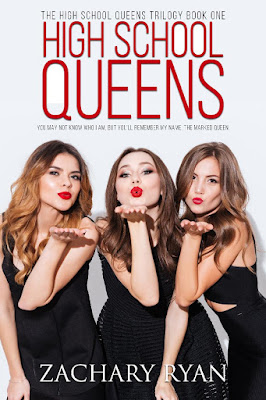 They all thought they did a masterful job of keeping their secrets close to their chest. These stupid fools thought they were the high court of this kingdom, but they had no clue who was really pulling the strings. You might wonder to yourself, who would be that heartless to make them backstab their friends, expose other's secrets, and lose their morals? You don’t need to know who I am, but you better remember my name, The Marked Queen. Danielle, Andrew, Delilah, Aman, and Jasmine all are now faced with a mysterious villain whose one goal is to ruin each of their lives. They must protect their secrets at all cost, or they'll be the next victim on Marked Day. They know what’s at stake, and they’ll stop at nothing to continue being: the rich spoiled girl, the normal teenager, the girl who isn’t banging the principle, the straight vlogger, and the girl who isn’t her dad’s punching bag.What happens when The Marked Queen changes up the game just in time for prom? Will each of our favorite puppets survive? Or are they willing to backstab each other just to keep up their personas? The only thing lost at this prom wasn’t going to be their virginity. Sex, Lies, and High School Queens explores the major theme of self-acceptance. Can they learn to accept all their flaws or pray victim to The Marked Queen? Each chapter continues to fill your sweet tooth until the climactic moment at the prom where you get to have that final bite of the bitch cake you’ve been dying to consume.

Excerpt:
Danielle, Delilah, and Jasmine on one side while Calvin, Aman, and Eddie were on the other side. “Now, before we announce who will be King and Queen, there is a video montage first.”
The video started off about Danielle with her fashion, Delilah with her writing, Jasmine with her studies, Calvin with baseball, Aman with vlogging, and Eddie with football. The video ended with all six of them in a group shot together.
Principal Grand smiled. “Well, that was something.” People started applauding. “Now it’s time to announce your Prom King and Queen.” Principal Grand opened the envelope. “Prom King and Queen of Johnson Prep 2018 are…” Principal Grand didn’t get to announce, because the projector started displaying another video.
Everyone turned to the screen and saw the new video. Everyone in the royal court except, Eddie’s, heart dropped. It started out with Delilah’s scandal being revealed in the form of a photo. The photo you might ask was a screenshot of Danielle spilling Delilah’s dirty secret to The Marked Queen. Delilah turned to look at Danielle.
“Someone turn this off!” Principal Grand screamed, because he couldn’t believe that this was happening. He was being exposed, and he didn’t know from who.
The next was of Andrew. It was another screenshot of Jasmine’s text to The Marked Queen. Jasmine turned to look at Andrew. She could tell that he was livid. What set him off the most, were the photos in the local newspaper of his mother’s destroyed grave. Andrew was filled with rage, and he didn’t know how to feel.
The next was for Flynn. It was a photo of Delilah’s work next to Flynn’s, exposing that he had taken material from her story to add to his. Delilah was pissed and hurt about Danielle’s betrayal, but she had a moment of gratification.
The next one was of Aman and Calvin. Aman and Calvin turned to each other. It was a photo of them kissing and a screenshot of Calvin telling The Marked Queen about their relationship. “How could you?” Aman felt completely betrayed by Calvin. Calvin wanted to feel remorse, but he felt free that it was finally out.
Then we had Jasmine’s dirty little secret. “I gave you Andrew!” she screamed, as she saw the photo of her father hitting her, and her puking in the bathroom. The caption was our favorite. “Maybe if she lost the weight faster, then her father wouldn’t have hurt her.”
The final one, was for the main Queen herself. It was a photo of Danielle’s real house. “Looks like this bitch was just a knock off.” It also had photos of her sewing her clothes from the window. “She believed she was Cinderella, but she would never fit into the glass slipper.” People laughed at that caption. Danielle felt mortified.
The lights in the room turned off. A spotlight had turned on toward the entrance. They saw her walk into the room, and everyone gasped at who entered. She walked into prom like the perfect villain. She knew the royal court was beneath her. Why have a plastic tiara, when your name would already be infamous? She headed straight toward her favorite subjects. Her dress was as red as the spilled blood of her victims. She knew no one expected her to be The Marked Queen, and that was what made this reveal so juicy. She grabbed a glass of sparkling cider off the table. She toasted to the puppets she had grown so fond of over the past year. “Hello, bitches.”


About the Author:
Zachary Ryan grew up in a black-and-white box in Maryland, before moving to Chicago to start a new life. There, he found that he was accepted for his misfit status—and learned that it’s perfectly normal to spend your twenties feeling lost and confused.

After a disastrous sexual encounter, Ryan stumbled on a group of true friends, or “soul cluster,” that he connected with. Through his writing, he hopes to help other broken souls out there find comfort amid the chaos.
Social Media Links:
Instagram handle: Zacharyryanbooks
Facebook page: zacharyryanbooks

GIVEAWAY:
Email ThisBlogThis!Share to TwitterShare to FacebookShare to Pinterest
a Rafflecopter giveaway
at 5:38 AM