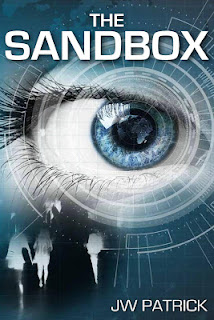 What would you do? After a mysterious impact in the dry Oklahoma landscape, three teenagers discover a world where they can do anything they want. Anything at all: Play. Explore. Fly. Destroy. But as a ripple of consequences impact on reality, Sonny, Isla and Dan realise this is far from a game. Do they now have the power to change the real world? Because if they do, they know exactly what they want to do first. Dirt-poor Sonny Monroe blames the oil company that fracked his family ranch for his problems. Dan Hawk, a Native American from the Chickatawa tribe, has never forgotten who stole his native Homelands. Idealistic Isla Duncan, a Scottish Paralympian junior on a charity handcycle tour, would just like to make the world a better place. As the three teens attract global enemies and the killings begin, grave doubts divide them: Do they control this new-found power? Or is it controlling them? If so, what on Earth does The Sandbox want?

Purchase Links can be found here: https://bit.ly/2EV6En0 or Kindle: https://amzn.to/2RilKpR

Editorial Review Self Publishing Review:
"A memorable new work of YA science fiction. The focal characters of this novel make for a brilliant trio of protagonists wrestling with powers they had previously thought were impossible. The true beauty of the writing comes in the development of these central characters. This is a patient, timely, creative and thoughtful book that discusses key social and environmental issues within the framework of a thrilling adventure. Fascinating and thought-provoking, the book and the magical realm of The Sandbox are well worth exploring." Self-Publishing Review, ★★★★

“In ​The Sandbox, the stakes are high as alien technology and three, over-excited teenagers take the lead in this fun adventure story. Fantasy meets science fiction to create an action-packed plot that will keep readers guessing all the way through. With whimsical imagery, Patrick’s imaginative novel is entertaining, stimulating, and captivating.” Rating: ​​5 out of 5 stars. www.bookreviewdirectory.com

Excerpt from The Sandbox

“So what are you doing in Oklahoma? Isla Duncan from the Kingdom of Fife,” asked Dan, competing for her undivided attention.
“I’m doing a sponsored handcycle for charity. The more miles I rack up, the more funds we raise. My dad’s driving my support van, a camper van, you guys call them RVs. He’s writing a book on the Scottish diaspora where all the Scottish emigrants ended up in America, so we’re visiting libraries all over. Tracing family names, contacting descendants. That sort of thing. Oh and our route takes in as many of the Wild West movie sites as possible. We’re driving down to Texas next.”
“You a big Cowboys and... Indians fan, huh…” said Dan.
She nodded hesitantly, “My dad is.” She threw him a sidelong glance, uncertain if that was OK or not. Dan busied himself nursing their nascent fire, neither judging her or letting her off the hook. Sonny returned to the cave mouth to watch nature’s spectacular demonstration of raw power outside, his eyes shining with excitement as he stood as near to the entrance as he dared.
Settling on to the ground mat, tracing out the pattern of a glorious sunrise with her fingertip, Isla took time to assess her predicament. As her eyes became accustomed, she realised the cave was the size of a large basement, with a wide entrance and several smaller caves off-shooting in other directions, into ever deeper, darker areas.
Sonny, hair rippling in the wind, grinned at Isla, but startled by a sudden, especially large gust, he staggered backwards, then quickly regained his composure to prove he wasn’t scared. No sireee. But Isla didn’t care.
The incessant howling wind, and the intense whistling outside began to worry itself deep into Isla’s skin. She shivered — then looked up. Even the massive walls and ceilings of solid stone now seemed vulnerable. Each boy was trying to be brave but when one spectacular gust reached deep into the cave as if some invisible giant was groping for them, Sonny scurried back to join them by the campfire. Dan grinned at Sonny’s failure to keep his cool.
Isla covered her ears from the incessant roar of the beast and stared at the cave mouth as if some horrific monster was about to burst inside at any second. Now the wall etchings of birds flickered in the firelight and she felt surrounded, and watched, by crows and by hawks.
Dan shuffled closer to her and put an awkward arm around her back which she accepted gratefully and spoke in her ear:
“This is quite unusual. A really big one!”
“No kidding!” she yelled back, eyes wide with fear.
“You couldn’t ask to be in a safer place though.”
Isla didn’t seem at all convinced. Behind her back, Sonny and Dan exchanged another rapid-fire series of glances and expressions:
Do something.
What?
I don’t know!
You do something!
No!
You!
“So what happened to your legs?” asked Sonny, finally.
Dan rolled his eyes. Dude! How could you?
What? What did I do?
“Car accident when I was four. My mum died. It was me that killed her.” 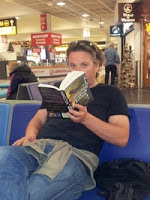 About the Author
JW Patrick lives in Scotland and has written voice-over scripts for television in the UK and USA.

My novels include The Invincibles, The Sandbox

I most recently completed a non-fiction book called Why have Adventures? for parents of young teens exploring the benefits of outdoor education.


a Rafflecopter giveaway
at 6:53 AM