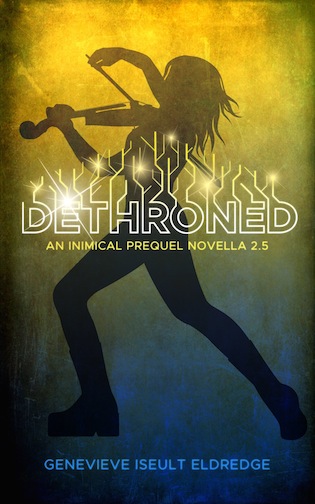 
For eighteen-year-old Rouen Rivoche, being a fairy princess isn’t about fancy parties and happily ever afters.
Rouen’s people are the dark Fae whose powers of lightning, thundersnow, and all things Winter make them cold, severe, and 100% intolerant of rebellion.
Too bad being a rebel is in Rouen’s blood.
Against tradition, she’s teamed up with Syl Skye, the sleeper-princess of the fair Fae—a mortal enemy who Rouen should want to kill but only wants to kiss. Plus, to be with Syl, Rouen’s masquerading as a glam goth-rock star and human high school student. Honestly, Rouen doesn’t think things could get any more complicated.
Then, she discovers she must become Queen of the Winter Court or all her people will die. No pressure.
Now, dark forces are amassing in the Winter Court, turning Rouen’s people against her and blocking her path to the throne. Even Syl with all her powers of white flame and Summer can’t stop this new kind of evil.
Because betrayal cuts close when it’s someone you love… and now it looks like Rouen’s going to be dethroned before she ever becomes queen.

There’s nowhere I belong
No home, no hearth
No sing, no song
A princess with no kingdom to rule
– “Nowhere I Belong” – Euphoria
It’s December 24, Christmas Eve in the mortal realm, and you know what that means.
Only fifty-four days to go. Fifty-four days until the Lunar New Year.
Until I take my rightful place as Queen of the dark Fae.
No more being Rouen, princess-assassin and rebel. Once Father steps down—and he said he would—I’ll take his place.
Half of me, my dark self, says he’s lying through his fangs again. But the other half of me remembers the father-before, the man he was before our realm was crippled by our mortal enemies, the fair Fae. That man taught me to fight, to tap into the Winter in my royal blood and hear the wintry nightsong running through our Dark Faerie realm like a secret language.
The Adamant King. He was a good father and a great king—powerful but even-tempered, severe but just.
That’s the man I could trust. That man would keep his word to make me queen.
Even though there’s never been a dark Fae queen. Ever.
I’ll be the first. I can’t wait to rule, to do whatever I want, to be with whoever I want.
In fifty-four days.
But who’s counting?
“Not you,” Syl murmurs sleepily as we lie on the beat-up couch in the dressing room of our local club/hangout, the Nanci Raygun. It’s a snug room wallpapered with faded band flyers and covered in peeling spray paint art. The best thing is the comfy couch that’s ideal for snuggling with your girlfriend.
“Nope. Not me.” I kiss the top of Syl’s red curls. She knows me too well.
Just like I’m the princess of the dark Fae, Syl’s the princess of the fair Fae.
We’re complete opposites. I’m everything Winter—storms and squalls and brutal cold, unyielding ice and thundersnow. My Syl is the epitome of Summer and sun and brightness, with the power to purify dark magic with her white flame.
We met when I tried to kill her.
Technically, we’re mortal enemies. Winter. Summer. You get the picture.
Long story short, I tried to assassinate her. Not my finest moment, but I was controlled by Circuit Fae black-magic—a Moribund infection that stole my will and forced me to hunt her down when she was a mere mortal. Sleeper-princess that she is, though, she Awakened to the fair Fae power inside her.
Hoo-boy, did she give me a hard time. I loved it. Still do.
Syl snuggles in closer. Her nearness sends a spike of warmth shooting through me. She leans her head on my shoulder. “Is it time for your gig yet?”
Ancestors, I hope not. I’d rather lie on this couch with her forever. Lazily, I look past the Euphoria fliers plastered all over the dressing room and check the faded Blue Bee Cider clock on the wall. Almost 11 p.m. “Ten minutes.”
Ten minutes till I step onstage and take on the Euphoria half of my mortal guise. The other half is a seventeen-year-old high school junior, but this is more my style—local legend and goth rockstar violinist. Thanks to my powerful Glamoury, only Syl, her mom, and a few kids at Richmond Elite High have put the Rouen-Euphoria connection together. Otherwise, the human paparazzi would have a heyday with us.
As it is, they mostly leave us alone. Good thing, too, since tonight, I want some peace.
Tonight’s special.
In a little bit, Syl will be headed off on her own. Her task is less glamorous, but far more important. She has to leave to grab our Christmas Eve dinner.
I’ve never had a proper Christmas Eve dinner. It’s a mortal thing and very different from my people’s Dark Yule celebrations (which involve a lot of mayhem and destruction), and I’m looking forward to it.
Syl turns her face into my shoulder and says something like, mumble, mumble, don’t wanna, mumble, mumble, cold outside, mumble.
So. Adorable. I kiss the top of her head, inhaling the heady scent of sunshine and vanilla. My sweet fair Fae princess.
I’d do anything to protect her.

Author Bio:
Raised by witches and dragons in the northern wilds, GIE writes angsty urban fantasy YA romance--where girls who are mortal enemies kick butt, take names, and fall in love against all odds.
She enjoys long hikes in the woods (where better to find the fair folk?), believing in fairies (in fact, she's clapping right now), dancing with dark elves (always wear your best shoes), being a self-rescuing princess (hello, black belt!), and writing diverse books about teenage girls finding love, romance, and their own inner power.
She might be planning high tea at the Fae Court right now.
GIE is multi-published, and in her role as an editor has helped hundreds of authors make their dream of being published a reality.
The Circuit Fae series
Derailed – A Moribund Prequel Novella
Moribund eSampler (FREE)
Moribund
Ouroboros
Dethroned
Inimical