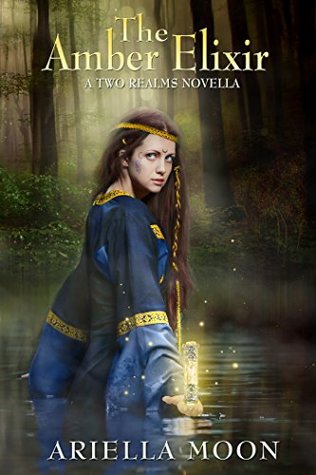 
Viviane, the new Lady of the Lake and High Priestess of Avalon, accepts a challenge from Merlin unaware her bold actions will have tragic consequences. Two of her priestesses are turned to stone. A forbidden love deserts her. Now alone, she has six young handmaidens to train and protect.
When Morgan le Fay demands assistance with a spell that could change the balance of power in the Two Realms, Viviane refuses her. But what if Morgan’s secret knowledge could restore the stone priestesses? Will an alliance prompt Viviane’s love to return? Or will the gamble cost her all she holds dear?

Magic abounds in the United Kingdom, a land steeped in history and enchantments. During research trips to England, Wales, Ireland, and Scotland, I always encounter paranormal activity. I discover it in caves, near fairy mounds, in crop circles, atop tors, and around ancient stone ruins.

I wove one of my most powerful and unexpected magical encounters into The Amber Elixir. During a trip to Cornwall, England in 2010, I explored Tintagel, the legendary birthplace of King Arthur. The ruins of Tintagel castle are perched high atop a promontory overlooking the sea. Far below, accessible at low tide, is Merlin’s Cave.

Merlin’s Cave? You may be thinking the same thing I did. Total tourist trap.

White light explodes through the sea end of the cave even on an overcast day. Entering from the beach, it takes a moment for your eyes to adjust to the cave’s shadows. Among the puddles, small boulders and glistening stones the size of a toddler’s fist litter the cave floor. The stones beckoned to me, and I picked up a few and placed them in my maroon jacket pocket.

Soon, when I reached out, sea-green-and-white stones magically appeared in my palm. Clamoring rocks jumped into my hand, then found their way into my bulging pockets. Had the enchantments not overtaken me, I might have remembered.

Considerably weighed down by wet stones, I departed the cave and climbed the steep, uneven stairs to the castle ruins. A few steps up, pain knifed my right knee. I didn’t realize at the time that the injury would take years to heal. Not until I was on the bus leaving Tintagel did I examine the enchanted rocks. With my mind no longer clouded by the cave’s enchantments, I noticed a few of the stones were riddled with angry entities. The hostile spirits demanded I take them back to the cave. Horror overtook me. Stuck on a tour bus, turning around was not an option.

I handed the most demonic of the stones to my seatmate, hoping she would laugh off my concern. The cool sea stone burned her hand.

“You have to get rid of it,” she said, blowing on her reddened palm.

The pain in my knee worsened. My stomach knotted. The rock’s protests shrilled in my head. I steeled myself. No way was that entity returning with me to California.

Merlin’s cave and the enchanted rocks appear twice in The Amber Elixir. Here’s an excerpt:

“Then stop dallying,” Merlin called over his shoulder as he disappeared into the cave. “The morning will soon turn to midday.”
And tonight will be the dark moon. Viviane took note of the wizard’s dung-colored mantle that laced over his chest. “Why are you dressed thus?” she asked when she caught up with him.
“Thus?”
“Your mantle. No bright colors to indicate your station as the Royal Druid.”
Merlin frowned. “We live in dangerous times. The Saxons are on the move. I prefer to not call attention to myself.”
“Oh.” She fingered the fine wool of her indigo cloak.
“Your staff,” he reminded her.
“Aye.” Viviane conjured a birch walking stick. In the past, she had slipped more than once on the glistening rocks beneath her feet. Her ears buzzed with the cave’s enchantments. She had learned to not stare at the rocks lest they appear unbidden in her hand. Many an unwary traveler had filled his pockets with the sea-green-and-white stones, lost track of the tides, and drowned.
Viviane raised her hand to shield her eyes. Even on the grayest day, a bright light shined through the sea opening at the far end of the cavern. Later, the changing tides would send water rushing through the gap, flooding the cave.
“This way.” Merlin picked his way over the stones. About halfway through the tunnel, he extended his hand and repeated, “Your staff.”


Viviane handed him the tall limb. Merlin raised the birch and knocked three times on a crevice in the curved cave wall. The crack widened and the air whirled. A shimmering portal opened in the rock. The young wizard returned the staff, and Viviane followed him through the magical doorway. 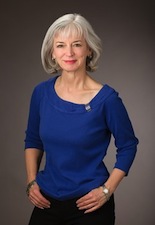 Author Bio:
Ariella Moon draws upon her experiences as a shaman and former teen to create magical Young Adult fiction. Her series include The Two Realms Trilogy, a medieval Scotland and Fairy fantasy adventure, and The Teen Wytche Saga, a series of sweet contemporary paranormal romances. Moon’s “Covert Hearts” appears in Second Chances: A Romance Writers of America Collection.
Ms. Moon spent her childhood flying to rooftops in her dreams and searching for a magical wardrobe that would transport her to Narnia. Extreme math anxiety and taller students who mistook her for a leaning post, marred her youth. Despite these horrors, she graduated summa cum laude from the University of California at Davis. She lives a nearly normal life doting on her extraordinary daughter, two shamelessly spoiled dogs, and a media-shy dragon.