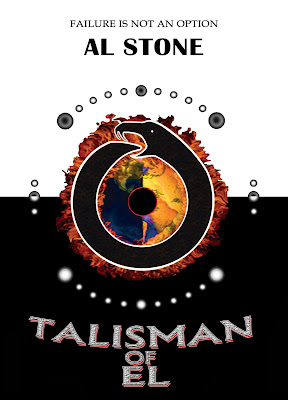 WHAT IF YOUR WHOLE LIFE WAS A LIE?

When 14-year-old Char­lie Blake wakes up sweat­ing and gasp­ing for air in the mid­dle of the night, he knows it is hap­pen­ing again. This time he wit­nesses a bru­tal mur­der. He's afraid to tell any­one. No one would believe him ... because it was a dream. Just like the one he had four years ago - the day before his dad died.

Char­lie doesn't know why this is hap­pen­ing. He would give any­thing to have an ordi­nary life. The prob­lem: he doesn't belong in the world he knows as home.

He belongs with the others.

Other Books in the T.O.E. Trilogy (click on images for Goodreads links):

About the Author
Al Stone is the author of the YA fantasy trilogy T.O.E. After graduating with a BA in Film & Television, Al had worked in the television industry for a short period before a disabling injury caused her to turn her hand to storytelling. Talisman Of El is her debut novel. The sequels Blackout and Ground Zero are currently available for sale.

When she isn’t writing, she enjoys going to the movies, listening to music and travelling. At present, she lives in England, United Kingdom with her family. 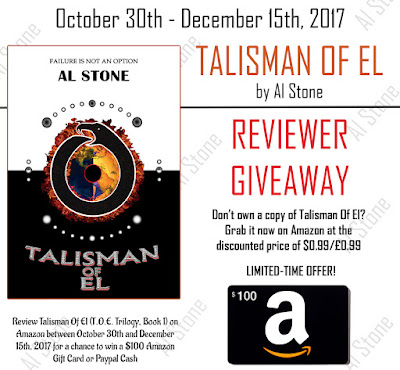 Review Talisman Of El (T.O.E. Trilogy, Book 1) on Amazon between October 30th and December 15th, 2017 for a chance to win a $100 Amazon Gift Card or Paypal Cash. Link to Reviewer Giveaway entry can be found at: http://www.aleciastone.com/contests
at 12:30 AM