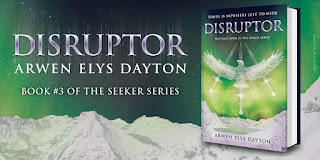 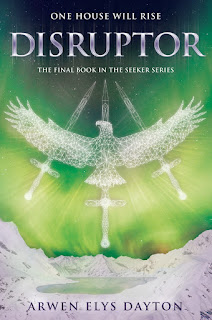 For readers of Sarah J. Maas and of Marie Lu’s Legend trilogy comes Disruptor, the sequel to Traveler and the thrilling conclusion to the Seeker series.

“Readers of the first two volumes will find their long-awaited conclusion here, and Dayton will have found fans for life.” -Booklist

Quin has spent her life as her father’s pawn. She was trained to kill and manipulated to guarantee her family’s power. And now that she’s broken free of that life, she’s found herself trapped again, hostage to a plot that has been centuries in the making.
It’s taken generations for the pieces to come together, and finally all is in place. Her best friend Shinobu’s mind has been corrupted, the Young Dread has aligned with her enemy John, and the bloodthirsty Watchers are being awakened and gathered. Now there is nothing that can stop the force of time.
But Quin will no longer be a pawn. She’s a Seeker, who stands for light in a shadowy world. She will face the vengeance of the past and its enemies and save herself and the ones she loves, or she will die trying.

“Katniss and Triss would approve.” -TeenVogue.com

“In this powerful beginning to a complex family saga…Dayton excels at creating memorable characters.” -Publishers Weekly

In the Seeker series, a teenage girl called Quin has spent most of her life training for what she believes is a noble purpose, only to discover that her family is turning her into an assassin instead.

Quin has grown up in the remote Scotland Highlands, where she and two boys her age—one her oldest friend, and one her boyfriend—have spent years preparing to inherit two ancient artifacts, which have been handed down in their families for hundreds of years.

These artifacts allow them to do astonishing things, including appearing and disappearing from anywhere in the world. Quin expects to inherit this power for noble purposes, but her father intends to use her as an assassin, plain and simple.

“Both past and present choices shook me to the core, and the final pages left me trembling . . . and then internally cursing that I’ll have to wait until 2017 for a final resolution!” -Fanboy Comics

The story is set in the near future, in a world where the hooded cloaks of Seekers and ancient Scottish ruins live comfortably next to futuristic airships and advanced medical techniques. It’s into this world that we watch Quin try to escape when she discovers the fate that’s waiting for her. And it is in this world that Quin is followed, helped, betrayed and abandoned by those she trusted the most.

Today I welcome Arwen to the blog for an interview!

Action films: yay or nay? If yay, your favorite, why?
Oh, yay for sure. Some of my favorite movies are action films—as long as they are clever and feel real, I’m in. It’s hard to pick one favorite, so I will say that Aliens and The Bourne Identity are nearly perfect films in my mind.

If you could be one of your characters, which one would you choose and why?
This is such a tough question. I’m going to go with the entirely unexpected and choose John. Why? Because John, at the beginning of Seeker, apparently has everything—the girl, the wealthy family, the good looks—and yet he actually has nothing. What he chooses to do in this situation (admittedly he doesn’t make very good choices) shapes the whole book series. I still hold out hope that John can change into the person he’s meant to be.

Your interviewing for a job at an ice cream factory, they ask you to come up with your own flavor based on your series, what do you call it and what's in it?
Classic Seeker: mint ice cream with dark ribbons of almost bitter chocolate twisting through it, and surprising pockets of golden nougat that keep you reaching for more.

You're visiting an 8th grade class and they need to read a classic fantasy novel based on your recommendation. Which book do you recommend to them?
My name is Arwen, so I feel as if I’m supposed to say The Lord of the Rings, which is the origin of my name. Of course these imaginary 8th graders should read Tolkien’s books. But… I can’t get Patrick Rothfuss’s The Name of the Wind out of my mind right now and also Anne McCaffrey’s Dragonriders. They should read all of these!

If you could choose to travel to 5 places and write books based on those places, where would you go?
1.     Shanghai. I need an ultra-modern, crowded city as inspiration for my next project.
2.     Tokyo. As with Shanghai, a huge, futuristic, overpopulated city, but with the Japanese aesthetic which makes you feel a little like you’ve landed on another planet. Need!
3.     Iceland. I used Iceland quite a bit as a location in Disruptor. Now I need to go there.
4.     Orkney Islands. Because I like cold, desolate beaches, and I guess I didn’t get enough of them in my imaginary trip to Iceland.
5.     Pacific Northwest. I am writing a story set in this rainy, gray part of the country. Luckily, I already live here, so all I need to do is look out the window.

You have to choose a musical theme for each of your books in your series, which songs do you choose?
Actually, I have full playlists for the books with links to their music videos and everything at http://www.arwendayton.com/playlist/seeker-playlist/

But, if I were to pick just one song for each book, it would probably be:

Disruptor: “Demons” by The National

Tell us 5 things you would be if you weren't a writer.
1.     Genetic engineer. We’re at the brink of an entirely different way of being human. With stem cells and other biological advances, this field is science fiction turning real before our eyes. I’m actually writing a book of short stories in this realm.
2.     Nuclear physicist. There are new, clean versions of nuclear energy on the horizon with the potential to free us from fossil fuels and provide unlimited energy to everyone in the world. Who wouldn’t want to be part of that?
3.     Human rights lawyer. We need more of these right now.
4.     Elementary school teacher. I love that age. The kids are blunt and boisterous and still mostly too young to worry about romance and about being cool.
5.     Researcher for other writers. I love research! And research for writers can be totally off the wall and amazing, like “please discover the most poisonous land animals in Asia” and “if I needed to kill someone very slowly, what would be the best way?”

Give us 5 pieces of advice you received as a writer that you still keep with you to this day.
I’m always looking for advice and asking other writers how they work, what their schedules are like, and what the most difficult part of the job is for them, so I hope I’m learning every day from others. Here are a few pieces of advice that have stuck with me for years:

1.     When you are getting started as a writer or getting started with a new story, give yourself the freedom to write and write and write without a lot of rules. If you try to think everything through up front, you’ll be too burdened to write anything.
2.     If you read something you wrote a while ago and think, “I could have done better,” realize that this means you ARE getting better. Your skills and tastes are evolving.
3.     If something truly interests and inspires you, others will be drawn to it as well.
4.     Similarly, no matter how wild or unexpected or strange at story is, it is as real to the reader as it is to you.

Thanks so much for stopping by today, Arwen! It was great having you here! 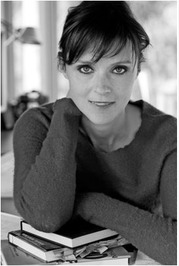 Arwen Elys Dayton is hard at work on the SEEKER series, a grand YA story for Random House.
Arwen began her career as a teenage staff writer at a foundation that produced Peabody Award-winning educational shows for PBS. Soon afterward, she began writing screenplays and novels, including Sovereign’s Hold and Resurrection, the #1 Amazon bestseller in Sci-Fi in both the US and the UK.She spends months doing research for her stories. Her explorations have taken her around the world to places like the Great Pyramid (which she explored by flashlight when researching Resurrection), Hong Kong and its many islands, and lots of ruined castles in Scotland. She enjoys creating complete worlds inhabited by characters who charm, frustrate or inspire.Arwen lives with her husband and their three children on the West Coast of the United States. You can visit her at arwendayton.com and follow @arwenelysdayton on Twitter and Instagram, or reach her by email at arwenelysdayton@gmail.com.She is represented by Jodi Reamer at Writers House.