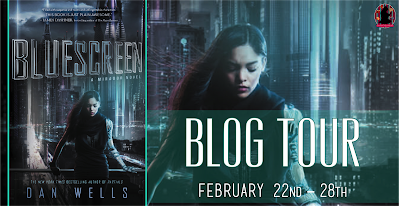 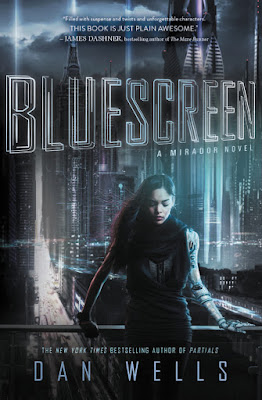 Los Angeles in 2050 is a city of open doors, as long as you have the right connections. That connection is a djinni—a smart device implanted right in a person’s head. In a world where virtually everyone is online twenty-four hours a day, this connection is like oxygen—and a world like that presents plenty of opportunities for someone who knows how to manipulate it.

Marisa Carneseca is one of those people. She might spend her days in Mirador, the small, vibrant LA neighborhood where her family owns a restaurant, but she lives on the net—going to school, playing games, hanging out, or doing things of more questionable legality with her friends Sahara and Anja. And it’s Anja who first gets her hands on Bluescreen—a virtual drug that plugs right into a person’s djinni and delivers a massive, non-chemical, completely safe high. But in this city, when something sounds too good to be true, it usually is, and Mari and her friends soon find themselves in the middle of a conspiracy that is much bigger than they ever suspected.

Dan Wells, author of the New York Times bestselling Partials Sequence, returns with a stunning new vision of the near future—a breathless cyber-thriller where privacy is the world’s most rare resource and nothing, not even the thoughts in our heads, is safe.

Brooke's Review:
I want to thank Harper Teen for providing me with a copy of this book to read and give an honest review. Receiving this book for free has in no way altered my opinion or review.This is my first Dan Wells book. I've seen his name around. And I've seen people really like his stuff. And I'm all about Sci-fi. So I was excited to give this one a try. And it did not disappoint.The first thing I will point out is how much I loved Wells' writing style. It was fast paced and fun. I never for a moment felt bored or annoyed with the characters or how the plot was progressing. It's always nice to be immersed in a book that keeps your attention.Moving on to the characters. I really enjoyed them. They were well developed and realistic. And most of all relatable. Also, they were very diverse. Wells really hits all genders and cultures with this crew. So nice to see that in a YA book.Marisa was hard core no bones. I loved her sass and her determination. And she was super loyal to those she cared for. She did second guess herself at times, but such is the life of a teenager, I would think. She's often so much stronger than she gives herself credit for.Of course you have her friends who support her throughout. I love how they are connected through gaming at first and then through other technologies later. And there are also those we are not sure we can trust. Thought they seem to have the best interest of the main character in mind, we find in the long run they are really only out for themselves.Wells does a nice job of world building. I would have liked a bit more backstory as to how the world became the way it did in 2050, but that didn't really detract from my enjoyment of the story.I'm not a gamer, so I really don't know all the nuances of this world, but I found Wells' descriptions of it really interesting. And I loved all the technology that was introduced. Bluescreen is a technological drug. I can't say I completely understand how something like that would work, but it's slightly terrifying that something such as this might actually come into existence in the future. Where even the thoughts in our heads might become available to others. Most of all I love the fact that Wells tackles the idea of what happens if our world becomes completely dependent on such technology. Marisa's character shows us how hard it is for her to function when the technology she relies on every day is no longer available to her. Also an interesting concept is the fact that we can easily be corrupted through technology without even knowing it's happening.I did find the teens in this story had too easy of a time not being around adults. I suppose in a world full of technology we tend to forget how important it is to touch base with our children at times. I can see how this happened a bit in this book. Thought the adults are not really as connected as the teens are.Overall, I really enjoyed this read. I can see how this will be a series and would definitely read the next book. Lovers of sci-fi books and certainly gaming will most likely enjoy Wells' cyber-thriller where the idea of privacy is null and void. 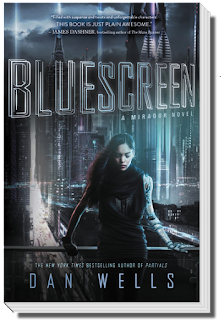 Follow the Bluescreen by Dan Wells Blog Tour and don't miss anything! Click on the banner to see the tour schedule. 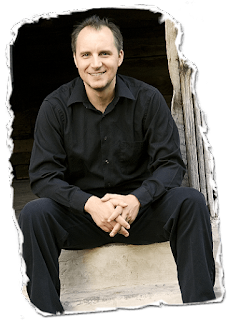 Dan Wells is a thriller and science fiction writer. Born in Utah, he spent his early years reading and writing. He is he author of the Partials series (Partials, Isolation, Fragments, and Ruins), the John Cleaver series (I Am Not a Serial Killer, Mr. Monster, and I Don't Want To Kill You), and a few others (The Hollow City, A Night of Blacker Darkness, etc). He was a Campbell nomine for best new writer, and has won a Hugo award for his work on the podcast Writing Excuses; the podcast is also a multiple winner of the Parsec Award.

a Rafflecopter giveaway
at 5:22 AM