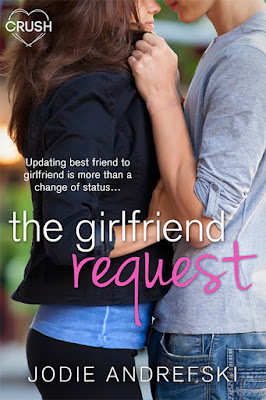 Emma has been best friends with Eli since she moved to his neighborhood ten years ago. Tired of being cast in the role of the girl next door, Emma creates a fake Facebook profile in the hopes of starting an online friendship with Eli, which would hopefully lead to more. Like...way more. From friend request to In a Relationship--it all seemed so completely logical when she'd planned it.

Eli can't figure out what Emma is up to. He’s pretty sure she's the one behind the Facebook profile, but then again, why would she do something so drastic instead of just admitting she wants to be more than friends? And who the heck is this new guy he saw her with? Eli starts to think that just maybe...he missed his chance with the girl next door.
Two best friends, one outlandish ruse. Their status is about to become way more than It’s Complicated…

This Entangled Teen Crush book contains one fake Facebook profile, two best friends who secretly crave each other, and a dreaded sex talk with parents…boy crush in the room included. Pushing a relationship beyond the friend zone has never been so crazy…


Brooke's Review:
I'd like to thank Entangled Crush for providing me with a copy of this book to read and give an honest review. Receiving this book for free has in no way altered my opinion or review.I've really been liking the books put out by Entangled Crush lately. They are sweet romances that touch on so many of the things teens face these days in real life. It's nice to watch them learn and figure out how to adult a bit.I especially like books where there is a friends to lovers theme. So when I read the blurb for this one, I was hooked from the start. And no matter which way it's presented, I'm always interested in seeing how the two come together.Meet Emma, best friends with Eli for as long as she can remember. But Emma has a secret, she's secretly in love with her best friend and is determined to have him see her as more than a friend. So she comes up with a plan to get him to fall for her through a fake Facebook account. Only it doesn't quite work as she planned. I liked Emma. She had this insecure quality about her that I think most teen girls can relate to. She does come up with a crazy plan to try and win Eli over. And I could tell from the start that all the flaws in her plan would probably cause it to backfire. But I will say she had a lot of determination to make it work.But Eli is no dummy. He's smart and curious and knows his best friend better than she thinks. So when he makes a new friend on Facebook, at first he thinks nothing of it. Then things start to kind of pull together in his mind and he's sure that Emma is keeping a big secret. And suddenly he realizes that perhaps his feelings go a bit deeper for Emma than he thought they did. I wasn't 100% convinced on his feelings for her, but I also know this stuff happens, so it wasn't unrealistic.I will say that I didn't see how Emma's plan would work out in her favor. And she hadn't really thought it through enough to see that holding back from Eli might not be the best thing to do. As the story progresses she certainly realizes this.There's a bit of a love triangle in the book, which I'm not a fan of. And I didn't really feel the connection between Emma and Jake like I did between Emma and Eli. But I understood the reasoning behind having it there. Emma needed a dilemma: does she really love Eli or is it that she's always had him around? I felt badly for Jake because he really had no clue what was going on.Overall this was a fast read. Not my favorite of the Entangled Crush line. I was expecting a bit more humor and perhaps for the book to really build on the relationship between Eli and Emma so there was more tension. The fact that Eli knew Emma was hiding her secret and what it was kind of slowed the story down a bit for me. I'm sure fans of this line will enjoy this book for it's sweetness and fast read. 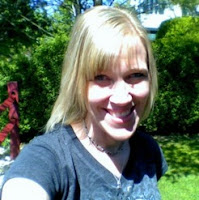 Jodie Andrefski has been passionate about reading ever since she was a little girl, when she used to climb trees to escape with a favorite book. She now lives and writes in a small town in Pennsylvania with her teenage daughter. Though still an avid reader, she now prefers a comfy chair over the crook of a tree. An unapologetic coffee fiend, she's even happier if her java comes with pie. Jodie often draws on her background in education and mental health counseling to bring real world experience to her writing. She is a firm believer in the magic of a first kiss, and insists that you should never, ever give up on your dreams.