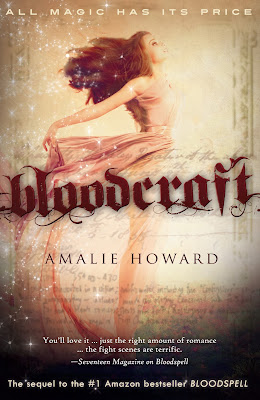 All magic has its price, and no one knows that better than Victoria Warrick. Gifted with a centuries-old blood curse, Tori has finally learned to master her blood’s demands and has emerged triumphant with Christian Devereux, a vampire overlord, at her side.

But the worst is yet to come …

In the infamous City of Lights, home to both the Witch Clans and the Vampire Council, Tori enrolls at the exclusive Belles Fontaines school in Paris, where she is faced with a devastating choice: choose Christian and be an outcast, or choose the coven and secure her place with the witches.

When the fate of the supernatural world is targeted by a sinister new threat, Christian and Victoria must unite their two warring species to defeat it. Their bond will be tested, twisted, and sorely weakened, and Tori will find herself in uncharted territory—a dangerous place to be when her blood’s magic has its own dark agenda.

But to save them all, she may have no choice but to invoke its deadly power.

Excerpt
With a frustrated growl, he gently but firmly separated their bodies, composing himself with a harsh breath. Victoria sighed and leaned back against the table, watching a muscle work in his jaw. It should be getting easier, but it only seemed to be getting harder—and riskier—for them to be together. Every touch, every look, every kiss drew them closer to the edge of the abyss from which there would be no return—one mistake and one of them would die. Victoria took his cool hands in hers.

“I love you,” she said as his hands trembled in hers. Touching his cheek, she climbed off his lap, putting some space between them. Despite the distance, she could feel her blood churning wildly, tempting him, inciting him to take it, and she shivered at the volatility of it. Her blood’s siren call was near impossible to resist, and she knew how hard it was for him. He’d once told her that he’d risk the consequences of her blood’s appeal because he couldn’t deprive himself of never being able to touch her.

Seeing the savage transformation in his face and the tips of teeth pressing into his lower lip, she wondered whether he still thought the same. Christian stood and kissed her fingers, and with the ever-present apology in his eyes, excused himself from the room. Victoria watched him leave, his long, lithe body loping with an easy grace across the back gardens into the forest beyond.

The château sat at the edge of the Fontainebleau forest, which, as in the days of old, continued to fulfill its function as a royal hunting park, for Christian’s purposes anyway. She pressed a finger to her lips, the impression of his lingering on them. Sometimes she felt like the vampire, as if she were the one who couldn’t get enough of him. And most times, she didn’t know if those feelings were hers or those of her blood. Given the chance, her blood would devour Christian’s very essence until there was nothing left.

It thrummed in her veins as if sensing her ominous thoughts, its hunger unabated and ever-present. It, too, was voracious and would consume anything to sate its dark thirst—even the one she loved. Victoria shivered, wrapping her arms about herself and staring toward the forest lost in thought. She wasn’t afraid of Christian or the fact that he was a vampire. After all, she was more of a monster than he could ever be.

AMALIE HOWARD grew up on a small Caribbean island (Trinidad & Tobago) where she spent most of her childhood with her nose buried in a book or running around barefoot, shimmying up mango trees and dreaming of adventure. 25 countries, surfing with sharks and several tattoos later, she has traded in bungee jumping in China for writing the adventures she imagines instead. She isn’t entirely convinced which takes more guts.

An aspiring writer from a young age, Amalie’s poem “The Candle,” written at age twelve, was published in a University of Warwick journal. At fifteen, she was  a recipient of a Royal Commonwealth Society Essay Award (a global youth writing competition). A Colby College graduate, she completed simultaneous Honors Theses in both French and International Studies, and graduated Summa Cum Laude/Phi Beta Kappa. At Colby, she was cited for research and criticism in Raffael Scheck’s article, “German Conservatism and Female Political Activism in the Early Weimar Republic,” and his subsequent book, Mothers of the Nation. She also received a distinction in English Literature from the University of Cambridge (A-levels) as well as a certificate in French Literature from the Ecole Normale Supérieure in Paris, France. Traveling the globe, she has worked as a research assistant, marketing representative, teen speaker and global sales executive.

agold-authorShe is the author of several young adult novels critically acclaimed by Kirkus, Publishers Weekly, VOYA, and Booklist, including Waterfell, The Almost Girl, and Alpha Goddess, a Spring 2014 Kid’s INDIE NEXT title. Her debut novel, Bloodspell, was a #1 Amazon bestseller and a Seventeen Magazine Summer Read. As an author of color and a proud supporter of diversity in fiction, her articles on multicultural fiction have appeared in The Portland Book Review and on the popular Diversity in YA blog. She currently resides in Colorado with her husband and three children. She is represented by the Liza Royce Agency and is a member of SCBWI.