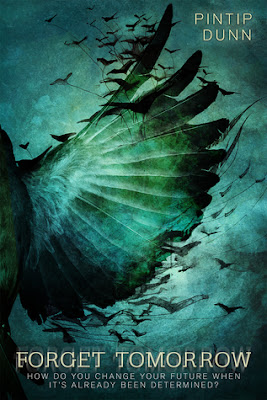 Imagine a world where your destiny has already been decided...by your future self.
It's Callie’s seventeenth birthday and, like everyone else, she's eagerly awaiting her vision―a memory sent back in time to sculpt each citizen into the person they're meant to be. A world-class swimmer. A renowned scientist.

Or in Callie's case, a criminal.

In her vision, she sees herself murdering her gifted younger sister. Before she can process what it means, Callie is arrested and placed in Limbo―a hellish prison for those destined to break the law. With the help of her childhood crush, Logan, a boy she hasn’t spoken to in five years, she escapes.

But on the run from her future, as well as the government, Callie sets in motion a chain of events that she hopes will change her fate. If not, she must figure out how to protect her sister from the biggest threat of all—Callie, herself.

Excerpt
“I can’t fight Fate. But I know who can. FuMA. I’m going to let them arrest me. Lock me up, so that I can’t fulfill my memory. Even if I want to.”
He stills. “But then you would be in detainment. For the rest of your life.”
You’ll never see the sun again, a voice inside me whispers. Never get married and have your own family. The inside of a cell will be your home for the rest of your days.
I don’t care. Tears drip onto my cheeks, and I swipe them away. This is my sister we’re talking about. My sister.
“I can’t imagine ever doing what my future self did.” I swallow hard. “But it happened. So I can’t guarantee I won’t change my mind.” I straighten my shoulders. “The safest thing for me to do is take the decision out of my hands. And FuMA’s offering to do just that.”
He closes the distance between us. “You can’t turn yourself in, Callie. Think about what you’re saying.”
“Both you and the Chairwoman said it—the hand of Fate is strong. I have to take extreme measures in order to defeat it. What can be more extreme than going to detainment?”
He opens his mouth, but before he can say anything, I twist away and look down the hill. “They’re coming.”
A fast-moving pack of bloodhounds drag along a blur of guards in navy and white uniforms. They’ve just begun their ascent, but the dogs are galloping up the slope, as if they can’t wait to rip me apart. I’ve got a minute, tops.
My hand closes around the black chip, and I pull it from my pocket. Without another thought, I throw it as hard as I can over the precipice. There. It’s gone. Just because I’m turning myself in doesn’t mean I have to tell them about Jessa. They don’t need any more reason to investigate her.
I turn back to Logan. His eyes pierce me with an expression of deep, unspeakable regret. Does he actually care? Underneath the years of silence and betrayal, does a kernel of friendship still remain?
“I’m sorry, Callie.”
There’s so much I want to say. I’m going away, for a very long time. This is my last chance to reconcile our old hurts. The last time to feel a real, human connection.
My last chance for a kiss. Oh, how I want to lean forward and press my lips against his. I don’t want to die having never kissed a boy.
But there’s no time. The dogs’ barks shatter the air like the rat-tat-tat of a machine gun. We hear the scuffle of feet against dirt. The officers will be on top of us at any moment.
“Go!” I shout at Logan. “Get out of here, before they
arrest you, too.”
He opens his mouth to say something, but I shake my head. “Don’t. Don’t make this any harder than it is.”
With his eyebrows pulled together, Logan nods, gives my arm one last squeeze, and disappears over the other side of the hill.
This is it. My last few moments of freedom.
Turning, I raise my hands in surrender. I take a deep breath, savoring the openness of the mountain air. And then I walk straight toward the officers.

When her first-grade teacher asked her what she wanted to be when she grew up, Pintip replied, “An author.” Although she has pursued other interests over the years, this dream has never wavered.

Pintip is represented by literary agent Beth Miller of Writers House. She is a 2012 Golden Heart® finalist and a 2014 double-finalist. She is a member of Romance Writers of America, Washington Romance Writers, YARWA, and The Golden Network.

She lives with her husband and children in Maryland.