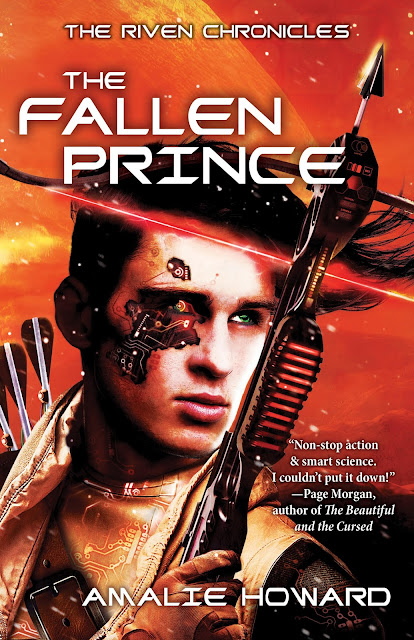 Riven has fought for a hard-won peace in her world, and has come to shaky terms with who and what she is—a human with cyborg DNA. Now that the rightful ruler of Neospes has been reinstated, Riven is on the hunt for her father in the Otherworld to bring him to justice for his crimes against her people.

But when she receives an unwelcome visit from two former allies, she knows that trouble is brewing once again in Neospes. The army has been decimated and there are precious few left to fight this mysterious new threat.

To muster a first line of defense, her people need help from the one person Riven loathes most—her father. But what he wants in return is her complete surrender.

And now Riven must choose: save Neospes or save herself.

Seventeen Magazine Summer Club author Amalie Howard grew up on a small Caribbean island where she spent most of her childhood with her nose buried in a book or being a tomboy running around barefoot, shimmying up mango trees and dreaming of adventure. 22 countries, surfing with sharks and several tattoos later, she has traded in bungee jumping in China for writing the adventures she imagines instead. She isn’t entirely convinced which takes more guts. She currently resides in New York with her husband and three children.

She is the author of The Aquarathi series from Harlequin TEEN (Waterfell and Oceanborn), The Almost Girl from Strange Chemistry, Alpha Goddess from Sky Pony Press, and Bloodspell from Langdon Street Press. She is represented by the Liza Royce Agency. Visit her at www.amaliehoward.comor on Twitter (@AmalieHoward).

Other books by Amalie Howard