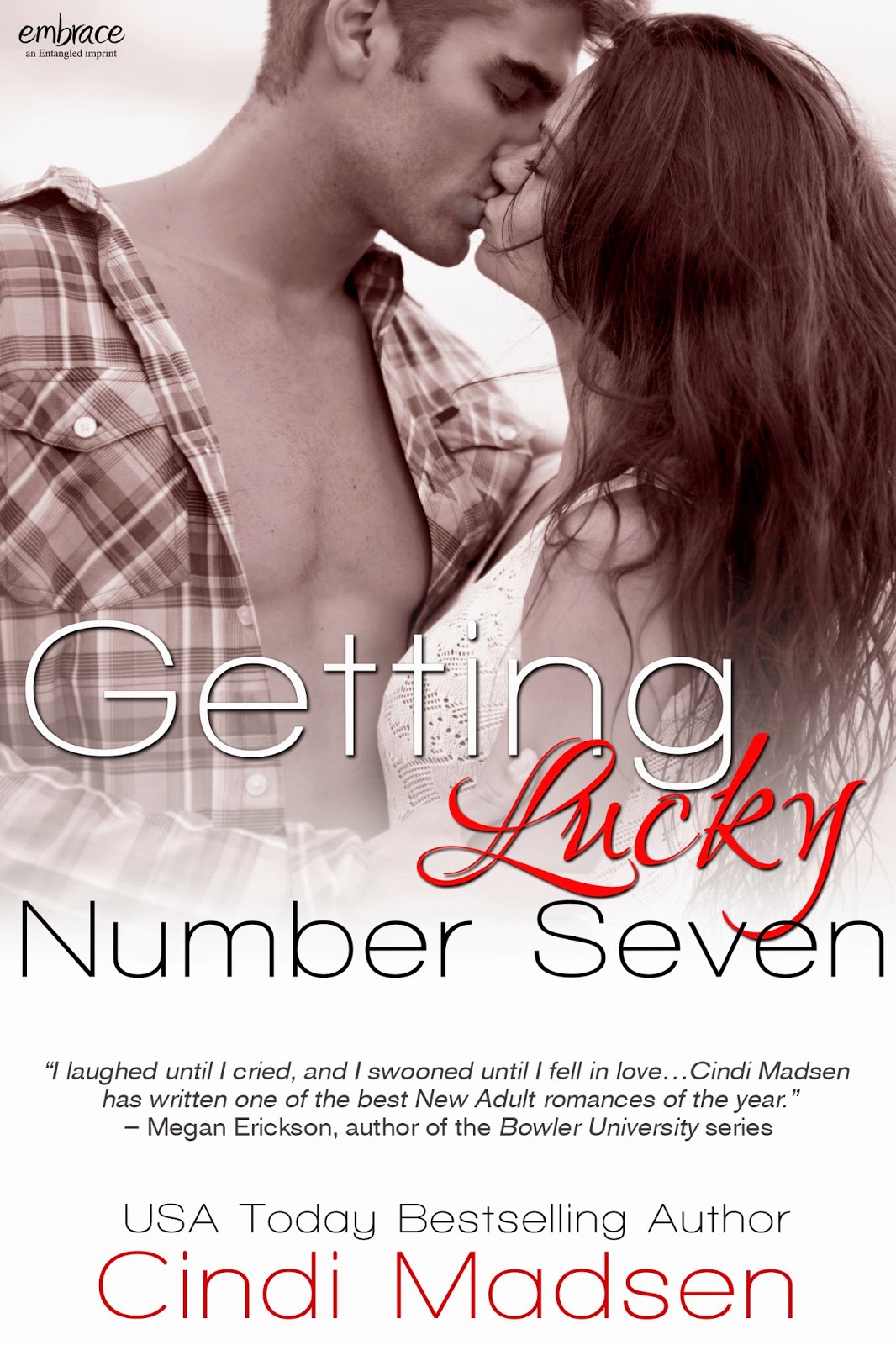 Lyla Wilder is done being the shy, chemistry nerd extraordinaire. While every other college student is out having fun, Lyla is studying. With her cat. Well, she's played it "safe" quite enough, thank you. So she creates a "College Bucket List"―with item #7 being a night of uninhibited, mind-blowing sex...

But she needs some help from her man-whore best friend.
>Hockey player Beck Davenport thought Lyla's transformation would be subtle. Man, was he wrong. With every item she ticks off, Beck finds himself growing seriously hot for his sweet, brainiac best friend. And if he's not careful, he'll end up risking their friendship in order to convince Lyla that he might just be her lucky #7....


Brooke's Review:
I want to thank Entangled Embrace for providing me with a copy of this book to read and give an honest review. Receiving this book for free has in no way altered my opinion or review.

I've been hooked on hockey lately. And this book just helped push that along!

Lyla, a girl who has decided there are things in college that she just must experience. So how does a nerd figure out those things: she makes a list. I love this concept and it's the second time I've read it in the last few months (the other being Cora Carmack's All Played Out). I can also totally relate to Lyla, because I myself am a huge list maker. There's just something about crossing stuff off that makes me feel accomplished!

But in order to do it she gets help from her best male friend, Beck. Who just happens to be a hot hockey player, and a player.

I love Lyla's tenacity in this book. She's determined to do what she sets out to do at all costs. She changes her look, starts going to parties and putting herself out there. But the one thing she didn't plan on was having her best friend actually seeing the list. And when he does, well, he just can't help himself but want to help her. This totally made me fall for Beck. Despite his player ways, you can see he truly cares for Lyla and doesn't want her to get hurt.

Of course there's no way the two of them can accomplish the list without having to do stuff together. Or at least that's what Beck convinces Lyla of. But because they are friends, he tries to make it perfectly clear that it can't be anything more than that between them. And Lyla tries to convince herself of the same. Well, we know stuff like this never works out. But I won't tell you anymore because I certainly don't want to spoil how things go!

Madsen has written a really cute coming of age story. Her characters are real and relatable. I had a very easy time getting into the story and even picturing myself in Lyla's shoes. And I love that Madsen based Lyla and Beck's relationship on friendship first. It gives such a great foundation to their budding romance.

I wil say that I was a bit disappointed that Beck didn't really notice Lyla until she made herself over. But, at the same time, I've seen this story over and over again so it seems to be a common thread in these types of relationships. But it was nice to see Lyla take charge and change herself into something different (though her reason for it could have been for her rather than because of what others thought).

Overall I really enjoyed this book. It was sweet and funny and just a little bit quirky. Readers of Cora Carmack or Kristen Callahan will be drawn right into this romantic story.

Cindi Madsen is a USA Today Bestselling author of contemporary romance and young adult novels. She sits at her computer every chance she gets, plotting revising, and falling in love with her characters. Sometimes it makes her a crazy person. Without it, she’d be even crazier. She has way too many shoes, but can always find a reason to buy a new pretty pair, especially if they’re sparkly, colorful, or super tall. She loves music, dancing, and wishes summer lasted all year long. She lives in Colorado (where summer is most definitely NOT all year long) with her husband and three children.