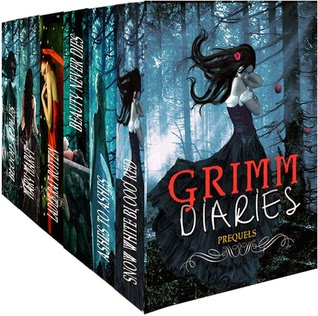 The Grimm Diaries are pages written in a Book of Sand, where each fairy tale character confessed the true stories once altered by the Brothers Grimm two centuries ago. To keep the truth about fairy tales hidden, the Brothers Grimm buried the characters in their dreams to never wake up again. But the curse is broken now, and the characters are allowed to wake up every one hundred years. They intend to tell the truth about really happened, and about an untold cosmic conflict between fairy tale characters.

The Grimm Diaries Prequels 1-6 recently made the Top 100 Kids & Teens Kindle Books of 2013 on Amazon, along with prequels 7-10, and Cameron Jace's Snow White Sorrow! 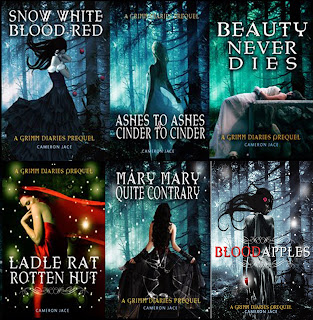 Click here to see what else this series has to offer!

The Cover Contessa's Review:
I love fairy tale retellings. I love seeing how different authors decide to twist the stories and make them totally different from what we knew as children. So, given the opportunity to read prequels about such stories, I jumped right on it. I want to thank the author for providing me with a copy of the first six prequels to read and review.

Snow White Blood Red:
I really enjoyed this twist on Snow White. I loved reading the "Evil Queen's" POV and hearing what she had to say about Snow White. And the twist the author decided to go with about Snow White was very enjoyable. I really want to see where this story goes for sure! The story is warped and way different from any direction I thought such a fairy tale retelling would ever go. I even came to really like, even identify with, the Evil Queen. Can you imagine that? Once you hear her point of view, you will definitely question the plot of the version you have heard all your life!The author has a great way with words. At first, I thought I'd be annoyed with this being told in first person with tons of narrative, but it didn't bother me in the least. As a matter of fact, the story moved very quickly and before I knew it I was done! And this story sets the tone, and introduces a main theme that will be ever present in the prequels to come!So, if you want a twisted version of Snow White's tale, that will take you in a direction you would never have imagined, then this is the story for you

Ashes To Ashes, Cinder To Cinder:
This prequel gives a bit of a spin on Cinderella's story. Not only that, but it introduces us to Alice, who is some sort of history tracker/investigator descended from the Grimm brothers. Alice, you say, yes, I do believe she may be related to THAT Alice. There are definitely some references to it in the story through the secondary main character, Loki (yup, can you imagine, Loki? only not what you think he is at all). But that may have just been the sarcasm of the author showing through. While I loved the first prequel this author wrote, I wasn't as taken with this one. I actually found myself to be a bit confused here and there when the two main characters were dialoguing. I know the effect was supposed to show the sarcastic nature of each character and how they might play off each other, but it didn't really work well for me. I also think there is a lot of information crammed into this story which made it hard to follow at times.I can say that I love the twist the author puts on Cinderella's story, at least on how she was born. The story is actually that of her mother, so it's before her time. But we see a background for the glass slipper and are once again hearing the name of the Evil Queen, whom we met in the first prequel: Snow White Blood Read. This story will definitely be interesting to read. I need to know more about the glass makers and the glass slippers. Plus, the addition of the mortals going into an immortal's dream state to find her and figure out where things went wrong was an interesting one

Beauty Never Dies:
This one was more weird than the others. I'm not even sure how to describe it. I found it a bit confusing at times: The Queen, Peter Pan, Beauty, Hunchy Dracula. Too many characters all mixed in there. I had a hard time keeping things straight and even understanding the relationship between them.The twist at the end was interesting. I wasn't expecting that, I have to say.Still, this one was totally creepy and unusual, which I guess is what the author is really going for with these novellas and the twists he is putting on the fairy tales we know and love so well. I can't really say much more than that as it was very short, almost like a prologue as opposed to a prequel novella.

Ladle Rat Rotten Hut:
Like the last story, this one was a little confusing. I kind of had a feeling where it was leading, so the big reveal was not all that shocking. I was a bit taken aback by the mixture of fairy tales, once again. I am finding some of the stories hard to follow because of this. But I do love the twist Jace has put on the story of Little Red Riding Hood. Very interesting to think of her in the way he does. And once again, we have the appearance of someone from Snow White's story, as it seems it might have been Snow White herself. But this is only a guess. And the bit about a small romance at the end seemed a bit out of place. Being a prequel, it's hard for me to know which elements will be important in the overall story of this particular character. Overall it was an enjoyable read.

Mary Mary Qyite Contrary:
I'm torn on this story.I do love that it's told from the Devil's POV. That's just great. Evil tells evil. I love it.But it was a bit convoluted with the introduction of Pippi (Longstocking?) and the re-appearance of Peter Pan (what was the point of him being in the story?) and then here come Rumplstilskin. It left me a bit confused.What also left me a bit confused was the time line. They start off in the 1500s, then they are in the 1600s all of a sudden. Then they go to look for something and they are gone for 200 years? The Devil is gone for 200 years? Who was doing his bidding? Who was causing the ruckus? I just didn't buy it, to be honest.But as for the story telling the origin of the "mirror mirror on the wall" that was interesting. I like how Jace explains it and who is inside the mirror (sorry, that's a secret until you read the prequel!). Overall a nice read, a quick read, and an interesting explanation to things!

Blood Apples:
I rather liked this prequel. It's told from Prince Charming's POV. He is so in love with Snow White and he will do anything to find her and be with her. But he's also not so smart. No, I will rephrase that, he's not smart at all. Everything has to be explained to him. It's rather annoying. Definitely not the strong Prince we are used to!And this story has Charming caught up in things he is not so used to. Anything including employing thieves such as Jack (from Jack and the Beanstalk, of course!).We also learn the origins of the apple. And it's not the red apple you know, rather it's golden. And this distinction is quite important. But I won't give that away.As with all these prequels, there is a link. We hear once again about Peter Pan, and Hansel and Gretel. But Snow White is the major link between them all. So you can imagine I am intrigued with her exact roll with all these characters. She is obviously very important, the center of what is going to happen.We are also introduced to the concept of Rupunzel in this story. Though she is not as she is in the fairy tales we know (what else is new with Jace's stories, right)? She's rather evil, but we don't get to know her well enough to really understand what roll she will play.I can say this, the story is definitely a take off of Romeo and Juliette. So if you're intrigued by this Shakespeare story, you may very well like this prequel. While I love Shakespeare, I think the inclusions of this theme in Snow White and Prince Charming's story is rather unnecessary.

Overall, I enjoyed these stories and I would love to get to know Jace's characters better by reading his full length books! 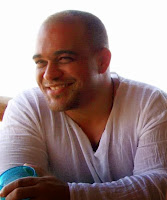 Cameron writes books that he can't find elsewhere, basically to amuse himself. Everything Cameron does is for fun, so don't take him seriously. Never call him a writer. He hates that. He prefers the word: Storyteller, or the boy next door who claims he can tell stories.

If you like his books, horaaaay! He loves ya too. If ya don't, hoooray! Now we know in advance that this relationship isn't going to work.

Although his books are ordinary on the surface, they hold many secrets that he might reveal one day. What matters the most to him are characters struggling to find their identities and place in the world.

Things you don't need to know:

He celebrates his birthday twice a year, the day he was born and Friday the 13th. He wants to live in a bubble house. He is a damn good guitar player. He is damn good architecture college drop out. He likes boats, beaches, bears, beards, bananas, bars, barfights, beans, bikes, bones, butter, babes, bakery, blizzards, and pirates (he thought it was spelled Birates when he was a kid.)

And honestly, writing in third person sucks! It's so fake.