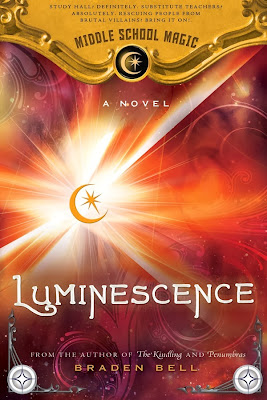 The cover for the final installment in Braden Bell's Middle School Magic series was just released.

"He's alive!" she yelled. "He's alive!"
As Lexa spoke the words, she knew they were true. She knew with total certainty.
"Dr. Timberi's alive!"

When Lady Nightwing kidnapped Dr. Timberi, everyone assumed their teacher had been killed. So when Lexa discovers that he isn't dead, Conner can't believe his ears.

Desperate to rescue Dr. Timberi, Conner, Lexa, and Melanie turn to the last person they want to talk to, the person who started all of this chaos--the Stalker. As the Trio confronts their worst fears, they realize their Magi powers may not be enough to keep everyone alive.

Your favorite characters return in this satisfying conclusion of the Middle School Magic series! Filled with plenty of twists, humor, and adventure, Luminescence will keep you guessing until the very end.
***

Luminescence will be released in March. You can read more about this series and the author at bradenbell.com

Braden Bell grew up in Farmington, Utah and graduated from Davis High School. He earned bachelor’s and master’s degrees in theatre from Brigham Young University and a Ph.D. in educational theatre from New York University. He and his wife, Meredith live  with their five children on a quiet, wooded lot outside of Nashville, Tennessee, where he teaches theatre and music at a private school. An experienced performer, Braden enjoys singing, acting, reading, gardening, and long walks with the dog.