Blue Lines by Toni Aleo is officially out today!!! 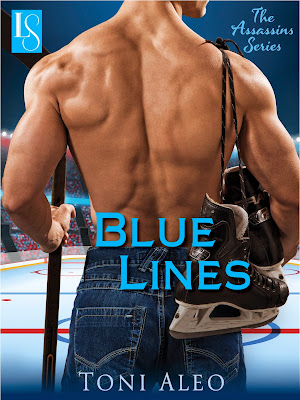 
Someone was shaking her.

Opening one eye, she peeked out of the covers to see Erik grinning at her. Making a disgruntled noise, Piper covered her face and muttered, “Go away.”

His chuckles filled the room as he wiggled his way under the blanket. His hands were warm against her exposed skin as he pulled her close to run his nose along hers. “Good morning.”

“I’m sleeping,” she muttered again as he kissed her nose.

“Well excuse me for being rude but I want to kiss the birthday girl.”

She opened one eye again, and set him with a look. “I have morning breath.”

“I don’t care, now kiss me,” he said against her lips. She didn’t even have time to smile or say no, he smothered her mouth with his own. She had to admit, it was a great way to be woken up. As he pulled back, Piper opened her eyes and smiled sweetly at him. His eyes were bright and his mouth was inches from hers as he looked deep into her eyes. “Happy birthday.”

She snuggled closer to him. “Thank you.”

“Do you want to get up or am I going to have to drag you out of this bed?”

“Why on earth would you do that?” she asked in mock horror.

He laughed. “Because Stanley and I made you breakfast and you have gifts.”

Piper thought for a moment before saying, “I do like food and presents.”

“I thought so. Why don’t you crawl out of bed, and come on,” he suggested as he kicked the blankets off them.

“Uggh,” she complained as she sat up, looking around the room. “I look a hot mess. I don’t want to do birthday stuff, Erik, I suck, I know.”

“I think you are beautiful, even when you are bitchy,” he said with a grin on his face, “Now come on.” 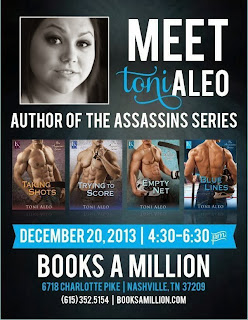 Join the Facebook event page
BLUE LINES BY TONI ALEO RELEASE PARTY
Prizes will be given away all day.

Also, If you post your review of BLUE LINES between December 9th - December 18th you could win some awesome prizes!

There are other ways you can gain extra entries.

1st place winner giveaway is open to US ONLY.
Gift Card giveaways are open international.