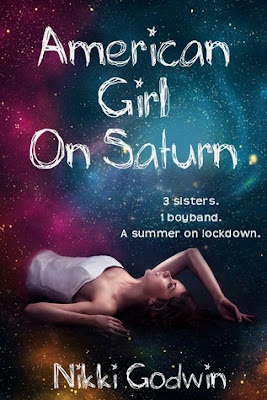 Summary from Goodreads:
The summer after graduation is supposed to be that first real taste of freedom - but not for eighteen-year-old Chloe Branson. Just as that breeze of freedom is making its way into her galaxy, her secret-service-agent dad drops a meteor-sized bomb of bad news on her and her sisters. An attempt has been made on the lives of Canadian boyband, Spaceships Around Saturn, during their USA tour, and the guys have to go into hiding ASAP. The only problem? In the midst of the crisis and media frenzy, their dad volunteered to hide the guys...in their house.

Six-year-old Emery is as ecstatic as any self-proclaimed Saturnite would be, but Chloe and her seventeen-year-old sister Aralie watch their summer plans crash and burn like a falling star. The SAS guys aren't happy with the situation, either. Bad boy Jules picks fights with Aralie about everything from his Twitter followers to his laundry, and heart-throb Benji can't escape Emery's fangirlisms for more than three minutes.

But after the super-cute Milo kisses Chloe during a game of hide-and-seek, she finally understands what Emery means when she talks about SAS being "out of this world." If this is what Saturn feels like, Chloe doesn't want to come back to Earth.

Excerpt:
I push him back. “You cheated!”
“Milo wins!” Noah shouts out. “I really thought you had it too, Chloe. I can’t believe you just crumbled like that.”
“He cheated,” I repeat.
Milo shakes his head in protest. Noah has the audacity to agree with him. And thanks to Emery’s lost spinner in the grass, the plastic is my only other witness.
Noah saunters over to us like a rapper trying to pull off a classic swagger.
“Good job, Milo,” he says. “You know how clumsy girls can be. I knew you’d take her down.”
I peel myself off of the plastic, grab my flip flops, and head back toward the house. I’ve had enough exhilaration and angst for one afternoon. The video premiere was enough. Porno-Posed-Twister with Milo was too much. But I can’t escape Spaceships Around Saturn even if I try.
Milo and Noah come up behind me like a black hole engulfing a shooting star.
“Whoa, where are you going?” Noah asks. “I need you to work some Sharpie magic for me.”
I spin around by the pool. The blue water glistens behind him.
“Why don’t you ask your Canadian brother to help you out? I’ll even lend you the Sharpies, traitor,” I say.
Noah attempts a jaw-dropped shocked expression, but his dimples pierce through and make it impossible for him to look appalled. He moves closer to me.
“If you wouldn’t keep secrets from me then I would’ve backed you up,” he says through his teeth. “I need to be in the loop.”
An evil thought crosses my mind, and I instantly do what I can to erase it. But it’s sort of like typing an English essay. You type a line. You think it sucks. You slowly backspace. Then you realize it helps meet that three-and-a-half-pages criteria, so you keep it. This evil thought is too good for the backspace button.
“You want in the loop?” I ask.
He nods rapidly, and his smile bounces up and down.
“Okay,” I say. “Spell ‘loop’ backward, and you’ll totally be in it.”
I wait half a second for the word to click in his brain before I push him with all my energy into the cold water behind him. A splash of H2O floods the poolside concrete and splatters over my feet as Noah bobs to the surface. I rush to the patio door before he has a chance to climb out and throw me in.
But Milo blocks my escape.
“Are you free tonight?” he asks.
“As free as I can be on a lockdown,” I reply.
He slides the patio door open and motions me inside. “I’ll hold Noah back,” he says. “As long as you promise to meet me out here at midnight.”

About the Author
Nikki Godwin is a Young Adult author from the southern USA. She is a city girl who can't live without Mountain Dew, black eyeliner, Hawthorne Heights, and candles from Bath & Body Works. When not writing, she's not-so-secretly internet-stalking her favorite bands. She is slightly obsessed with rock stars and surfers. She no longer hides her love for One Direction.

About the Author
Nikki Godwin is a Young Adult author from the southern USA. She is a city girl who can't live without Mountain Dew, black eyeliner, Hawthorne Heights, and candles from Bath & Body Works. When not writing, she's not-so-secretly internet-stalking her favorite bands. She is slightly obsessed with rock stars and surfers. She no longer hides her love for One Direction.
***Author Links***