Seventeen-year-old Joanna Murphy has lost faith in her life. Vying for her mom’s attention, she’s resentful of her stepdad’s intrusion to their family. Her best friend, Tommy, has no clue she’s in love with him as he dates girl after girl without noticing how it tortures her. The final kicker, though, is God’s sick joke to make her freakishly tall when everyone knows boys prefer petite girls.
Then in a bizarre accident Joanna meets James, a breathtaking teen who appears to her after an unusual falling star sighting. Suddenly, her dream for an alien encounter becomes all too real. But when she finds her life has been made unrecognizable, she’s forced into an explosive study of the original design for her life that just may have her regretting every wish she ever made.

Excerpt of Visited
I gape up at him, the fear beginning to course through my veins. “Who are you?”
“A friend.” He answers in an even enough tone, but at the same time, his face begins to glow the color of amber, making him look warm and unusually vibrant. I’ve never known any being able to radiate such a glow. Any being from Earth, that is.
“A friend?” I manage to whisper back before swallowing a gulp. “Are-are you human?” I’m half kidding, but after years of watching realistic science fiction movies and reading a library of fantasy novels, I think I mean the question more than I want to admit. However, he doesn’t answer me. He averts his eyes, blinking rapidly like he’s unsure of the situation.
Again, I’m at a loss of what to think. I thought I asked a pretty straightforward question and he can’t even answer that. By his omission, I have to assume he’s trying to tell me he isn’t human!
Is this really happening? And, more importantly, if he’s not human, then what is he?
My brain pores through a dozen images at once, my chest heaving from the excitement. I flash to movies, T.V. shows, graphic novels, and to my own imagination as I consider what life form James could be. While I try to convince myself I’m jumping to conclusions, that of course this is all a misunderstanding or perhaps an elaborate hoax, something else itches in the back of my mind. That something whispers: Haven’t you always considered the existence of other worlds? Discussed the possibility a hundred times with Tommy?
The answer to both questions is an emphatic yes. I decide right then, despite all reason, I know what James is.
“I think I know what you are,” I remark feebly.
He turns to me with a spark of expectation in his eyes, still glowing, still warm.
“You came to Earth with that star last night, didn’t you?”
Blood rushes to his cheeks, giving him an even brighter supernatural glow, and then I know I have my answer.
“That’s it, isn’t it?” I sit upright, gripping the sheet into my fists. “You’re from another planet. That’s how you have the power to heal.”
He pales for a second, but amazingly, he doesn’t deny it. He flickers his lashes upward like he’s searching the ceiling for his reply. After a moment, he shakes his head of soft curls that brush his neck before redirecting his intense expression back on me. He licks his lips and smiles pensively, but I feel the same need as before to shy away; whether it’s from shock or from a loss of focus I don’t know, but holding his gaze is next to impossible.
My mind is all aflutter trying to come to grips with what I’m being confronted to believe.
“Incredible. I was right all along,” I murmur, commenting to myself. “Aliens do exist.” 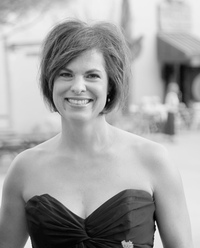 Janine Caldwell was born in Concord, CA and raised in the small San Francisco Bay Area town of Clayton. Four days after her high school graduation, Janine attended California Polytechnic State University, San Luis Obispo and graduated with a degree in English.
Janine now lives in Anthem, AZ with her husband and two sons. As a lifelong literature fanatic, she knew it was only a matter of time before she would become obsessed with writing her own work. With relatives like the Brothers Grimm and Anita Loos (Gentlemen Prefer Blondes), she figured fantasy writing had to be in her DNA.
Books published by Janine include Visited, a YA coming-of-age fantasy, Rematch and Double Fault—the first two books of The Vortex Series. The final book in this YA fantasy romance, Deuce, will be released fall 2013.