Moonlit Eighteen-year-old Tanzy Hightower knows horses, has grown up with them on Wildwood Farm. She also knows not to venture beyond the trees that line the pasture. Things happen out there that can’t be explained. Or undone. Worse, no one but she and the horses can see what lurks in the shadows of the woods. When a moonlit ride turns into a terrifying chase, Tanzy is left to question everything, from the freak accident that killed her father to the very blood in her veins. Broken and confused, she turns to Lucas, a scarred, beautiful stranger, and to Vanessa, a charming new friend who has everything Tanzy doesn’t. But why do they seem to know more about her than she knows herself?

Amazon Kindle * Amazon * Goodreads
WiDo Publishing * Barnes & Noble
Praise "Virginia's trees look like they're burning. Most of them blaze crimson or gold, but some still have a chokehold on their green. I wish they'd give it up already. Leaves are more beautiful when they're dying." And so Moonlit begins. From here the story rolls from one twist to another with many vivid characters whose motives are hard to predict. I found myself being suspicious of everyone, wanting to tell Tanzy to be very careful. The deeper I fell into the plot, the more questions kept rising to the surface. But not to worry, all of my questions were answered. Appropriate for all ages, if you love paranormal fantasy mixed with suspense, mystery and other-worldly romance, you'll love this novel! ~Author Julie Ford   Prologue The first anniversary of my father’s death was even harder on my mother. Back then, I thought she was haunted most by what she didn’t know. I refused to blame her when she raged above me on our staircase that night, drunk and sad and angry. When she made me promise I’d never ride again. When she hurled a half-full bottle of vodka at my face and it exploded on the wooden stairs at my feet. I hadn’t tried to get out of the way. She had just missed. I wanted to tell her that knowledge was no solace, that what you know can burn inside you until there’s nothing left but guilt and ash. I also wanted to protect her from losing the only piece of him she had left. So I didn’t say a word.


I am pleased to welcome Jadie Jones for an interview today!

Did you always know you wanted to be a writer or did you want to be something else? I have always wanted to be two things: a horse professional and a writer. It’s been awesome to play the two off of each other. I think having both of those roles in my life makes me more balanced. I get tunnel vision like nobody’s business.

How long does it take you to write a book from start to finish? I worked on the first book off and on for three years. Then the editing process with my publisher took about six weeks. The sequel is moving at a much faster pace because I want to get it out for readers who are eager to see what happens next. I started the sequel in October and plan on submitting it to my publisher this month.

How do you come up with themes for your stories? My mind wanders really, really easily. And I love to be inspired. Maybe it’s a song or a really stunning piece of scenery or someone who seems to have something very bright or very dark about them.

Do you have a schedule of when you write? I write after my daughter goes to sleep, usually around 8pm, and work until at least midnight at least four days a week, more if I’m on deadline.

How are you able to balance other aspects of your life with your writing? I’ve had to let go of the idea that I can be everything for everyone all of the time. I am a mom first, always. But with the rest, they have to fight for the top of the list. And I’ve finally learned to let go of what I don’t get done. I don’t multitask well, so I compartmentalize instead. And I have a husband who works a lot and understands that this is a job for me too, so he doesn’t mind the neglect 

What elements do you think make a great story line? A flawed heroine, a setting you can see, taste, and feel, and a sympathetic villain.

What was the hardest thing about writing a book? Deciding that it was finally “ready.” It’s so hard to stop tweaking and editing.
How many books have you written so far? Do you have a favorite? Moonlit is my debut novel. I’m almost ready to submit the sequel, which has a much different feel than Moonlit. I think Moonlit will always be my favorite because it was my first. Even though, in looking back, there are elements I wish I’d set up better for the sequel, I’m still enchanted with the story, and I love who the characters are becoming.

Do you have a favorite character? Vanessa is probably my favorite character. She is extremely complex, and she’s brilliance wrapped in southern charm and blond hair. You never know how far she’ll go, and that’s exciting to write.

Where do you write? Where ever I can! I have a two year old and two other jobs so I have to be flexible.

When deciding on how to publish, what directed you to the route you took? Early on, I really wanted an agent. I queried over 50 agents, and was rejected each time by a basic form letter. After I licked my wounds, I sat down and tore apart my manuscript, and then rewrote over half of the whole story. By this time, I’d determined I wanted a one-on-one relationship with my publisher so I could learn how the industry/process worked first hand. So I looked up a few small publishers and queried five. Three of those asked for the full manuscript. From there, I did my homework on the publishers, and felt like WiDo was a great fit. I’ve been very happy with the experience.

Have you gotten feedback from family about your book? What do they think? My family has been very supportive. My husband beta reads for me, and he’s a huge help with the action scenes. My dad really enjoyed the book. He likes a strong female lead, and he likes “options,” so he was very intrigued by the ending. My mom doesn’t love supernatural/fantasy type stories, but she read the whole thing and said it was “compelling,” so that was a huge compliment coming from her. My favorite though is when my two year old daughter sees Moonlit – either out in the world or on my computer screen and shouts: “That’s Mommy’s book!” That’s awesome.

What kinds of advice would you give to someone who wants to start writing? Start building a network now. Find writers who are in various stages of the game and develop critique relationships. Join sites like six sentences (www.sixsentences.ning.com) or scribophile.com to develop your editorial eye and to learn how to make your words count. And make writing a priority. You have to believe in you first. And, of course, read as much as you can.

What is your favorite book? Favorite author? Do you have an author that inspired/inspires you to write? My favorite book is “Bloodroot” by Amy Greene. The ending of Bloodroot is my favorite ending of any story ever. My favorite author is Walter Farley, the writer of the Black Stallion series. I read those books one hundred times growing up – although the end of the series, while perfect, infuriates me. This sounds terrible, but my favorite books make me feel like I have no right to string a sentence together. It’s books I don’t care for that inspire me to write. I think: if this is selling (and usually selling very well) then I can do this, too.

Do you have any go to people when writing a book that help you with your story lines as well as editing, beta reading and such? I only had one beta reader for Moonlit, and I didn’t even know she was a “beta” reader – I didn’t know the term at the time. She was a friend from high school who was my editor on the school paper. So I looked her up on Facebook and sent her a draft of Moonlit. She helped me figure out what I wanted to focus on in the story, and I tore it apart from there. Since then I’ve learned how much a fresh set of eyes can help my work, and for the sequel I have a group of beta readers that are evaluating the sequel as I type.

Are you working on anything now? I am finishing up the sequel to Moonlit, which takes a darker turn at a faster pace. And then I’ll begin outlining the third and final book in the series. I also have a draft of a new adult fiction story that I’m working on. In September, I will appear in “Indiestructible,” which is a collection of essays from writers who have published with small presses or have gone the self-publishing route. All of the proceeds will go to BuildOn, which is a NFP that works to end the cycle of illiteracy and poverty. 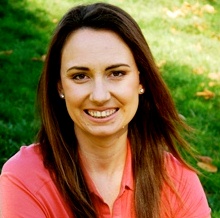 Author Jadie Jones Georgia native Jadie Jones first began working for a horse farm at twelve years old, her love of horses matched only by her love of books. She went on to acquire a B.A. in equine business management, and worked for competitive horse farms along the east coast. The need to write followed wherever she went. She currently coaches a hunt seat equitation team that competes in the Interscholastic Equestrian Association, and lives with her family in the foothills of north Georgia. When she's not working on the next installment of the Moonlit series, she is either in the saddle or exploring the great outdoors with her daughter. Moonlit is her first book.