Blog Tour: Call of the Jersey Devil by Aurelio Voltaire

How do you come up with themes for your stories?
V: I don’t know. They just pop into my head.

Do you have a schedule of when you write?
V: Not really. On any given day I might be recording an album or touring, desiging a toy or making a show film. So, I write when I can. This book was very important to me so I carved out time almost every night to write it. The majority of it was written between the hours of midnight and 8am at a café in New York City called Yaffa.

How are you able to balance other aspects of your life with your writing?


V: With great difficulty. But somehow I manage. Being self employed is amazing, but there’s no one to tell you when to work and for how long. So, you have to get really good at making those decisions for yourself. Luckily, I’m a slave driver, so being my one and only slave, I get lots done.

What elements do you think make a great story line?
V: Conflict for starters. I’m not sure it’s possible to write an intriguing story without it. However, it’s really important, I think, to get the audience to love the characters first. If they fall in love with the characters and those characters are confronted with a terrible conflict, the audience will be invested in their journey.

What was the hardest thing about writing a book?
V: I loved the process. The only bad thing really is the amount of time it takes. One really needs to be committed to seeing it through because it takes a long, long time to write a book, well, a good one, anyway.

How many books have you written so far? Do you have a favorite?
V: I’ve written three books. The first two were non-ficiton. They were What is Goth? and Paint it Black: a Guide to Gothic Homemaking. This is my first novel and of all of the novels I’ve ever written it’s definitely my best. ; )

Do you have a favorite character?
V: I’m partial to Villy Bats. He’s a washed up Goth singer desperately clinging to a very brief period of time in his life when he experienced a tiny bit of success. He’s bitter that he’s no longer famous yet really hopeful that he still might make it. He’s sort of a tragic figure who seems pretty unlikeable until you get to know him a bit better. And of course, since it was always my intention to play him in the film version I had originally imagined myself making of this story, I feel pretty close to him. We clearly have a lot of similarities… just not too many I hope because he’s kind of a dick. LOL!

Where do you write?
V: Covered that. In Yaffa café! LOL! I also do a lot of writing on planes while I’m touring. It’s one of the few places people can’t reach me. I love that

When deciding on how to publish, what directed you to the route you took?
V: I had every intention of self publishing this book! But I had a reading at Dragoncon and a lovely young lady named Trisha Wooldridge happened to be there. She also happened to be an editor at Spencer Hill Press and in short, she convinced me to sign with them. I’m glad I did! They’ve been really great!

Have you gotten feedback from family about your book(s)? What do they think?
V: No, not really. I ran away from home when I was seventeen and long ago stopped wondering what my family thinks of my “art”.  I think my son will really love this book, though.

What kinds of advice would you give to someone who wants to start writing?
V: Start writing. What’s holding you back… can’t find a pencil?

What is your favorite book? favorite author? Do you have an author that inspired/inspires you to write?


V:  I may not have written this book if it weren’t for my friend Andy Deane. He’s the lead singer of the band Bella Morte. A few years ago, while on tour I noticed that he was selling a novel he’d written at his merch booth. That’s pretty rare for the singer of a Gothic punk band! It was a werewolf novel called The Sticks. I bought a copy and read it on the rest of the tour. He writes the way he speaks so it’s not exactly written in a way that avid readers might get or appreciate but for someone who knows the guy personally, it really was a lot like having him simply tell me a campfire tale. And he has a wicked sense of humor and is more than just a tiny bit obsessed with fecal analogies! LOL! I found it really funny and enjoyable, but moreover, it rid me a bit of that fear that writers belong to some secret society that I don’t belong to. It, in essence, granted me the license to do as my friend had done and commit a spooky tale to paper for others to enjoy

Do you have any go to people when writing a book that help you with your story lines as well as editing, beta reading and such?
V: Well, I didn’t before I wrote this book, but working with my editor, Trisha Wooldrige was absolutely invaluable in making this the book that it is. She was really insightful and helpful. It hurt when she suggested I cut parts, of course, but she more than made up for it in demanding I develop further some of the characters that didn’t have much of a back story. Now, some of my favorite parts of this book are the parts she insisted I add.

Are you working on anything now?
V: Where do I begin? I’m writing the script for a feature film based on one of my earlier comic book series, Oh My Goth! I’m recording my eleventh full length CD. I’m touring the UK next week and come back to more shows. I’m preparing five different toy releases for this year. I’m wrapping up my children’s book. And slowly, I’m starting to write my next novel, The Nothing. Maybe not surprisingly, there are about a dozen other things that I can’t remember at the moment.
Thanks for the interview! 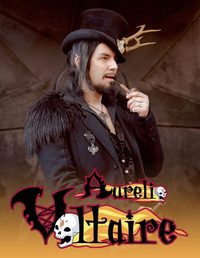 Thanks so much for stopping by. Your answers were terrific! AND, I did do my homework, but my readers may not have :P Love your snark, by the way! And I can totally see how Villy Bats is based on you, for sure. Actually, while reading your book, I totally pictured him as you (before I knew the answer you gave above!). Great having you hear and looking forward to more from you in the future!

Stop by tomorrow to read my review of Voltaire's book:
Call of the Jersey Devil