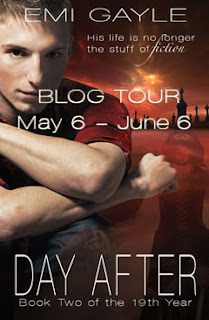 Today we welcome Winn from Emi Gayle's The 19th Year series!
I can't tell you how excited I am to have him here for this interview! I think you'll love him as much as I do once you read this. So read on!

Thanks so much for stopping by today, Winn. So great to have you here! We’ve been looking forward to your interview for a while!

Thanks for having me.

So, let’s get down to the nitty gritty, shall we?

I’m here to answer anything you’d like. Within reason of course.

We have some awesome questions to ask, I hope you’re up for the challenge!

Always. I did start dating Mac, right? What bigger challenge is there?

First, tell us what it is that draws you to Mac. Is it her wit? Her looks? Her charming personality?

Her personality? Have you met her? She’s snide, selfish and snarky. But there’s something under that. I saw it a long time ago, but she was the untouchable at school, so when I got the chance to work wtih her, I wasn’t that excited, but I figure it out. Some of that is just a mask and she’s seriously cool.

It’s tough! Think about having to get answers from demons, vampires I would swear want to bite me but don’t, demons, griffins, shapeshifters, elves, wizards ... all these kinds of people and they don’t even tell you the right answers! It’s crazy. But cool.
Did you ever think about getting contact lenses instead of wearing those glasses all the time?

I have contacts. They just bug my eyes, so I keep my glasses with me all the time.

If you could be the one to chose, what ultimate form Mac would take (we know, we know, you want human, but that’s not a choice now, is it?)?

If she doesn’t pick human, I’d love it if she’d pick something like Alina - a fairy. There’s just so many cool magica options with that. That’d be my pick. Maybe. Or Siren. that’d be cool, too. Though .... no, you know? I don’t think I know any better than her. So I’m going back to finding a way for her to be human. Yup. That’s my answer.

Have you been studying hard to figure out everything about all those mythical creatures?Tell us something you’ve learned while studying!

I have been. Studying, reading, translating and generally trying to get all the answers so I can understand so she can do what she needs to do. It’s hard though!
Okay, so something I’ve learned? Hmmm... who knew Abaddon demons could be so flighty? I mean we think demons are like muscle, but Suze ... he’s got a brain ... though he’s a work in progress. That, to me, is super cool, but it just goes to prove that judging the book by the cover isn’t the way to do things.

Finally, where do you see yourself in the future? Married with kids? Fighting supernatural beings? Selling shoes in a mall? Enlighten us a bit!

Married? Um ... I’m eighteen. Not sure I’m ready for that. I just know that I’m focused on Mac’s birthday because that’s when everything is going to change. I guess after that, it’s life as it used to be, but I still don’t really want it like that, so I don’t know. Haven’t thought much about it except I’m going to college, and I’d love it if Mac would go with me, could go with me, but well ... that would require that she pick human. So ... I just don’t know.

Thanks so much for stopping by. It’s been great getting to know you! We would love to hear from you again in the future for sure!

Thanks for having me. It’s been fun! 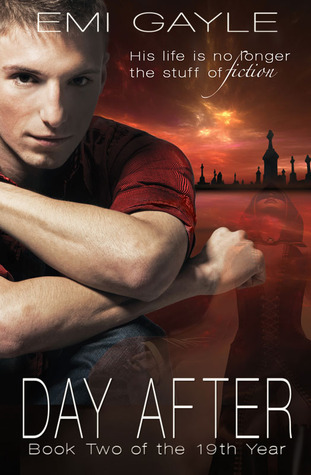 Demon crypts. Vampire lairs. Glowing angels. Sexy sirens. The stuff of fiction.
Or so Winn Thomas always thought.
Since being accepted into the fold of the supernatural, he knows better. None of what he imagined is true, but everything he feared is, and binding himself to his Changeling girlfriend until her nineteenth birthday will give him an education far beyond what he’d get at his human high school.
Luckily, Winn’s not giving up, he won’t back down, and he definitely isn’t going to run away with his tail between his legs. After all, only werewolves have tails. Right?
In this, the second of the 19th Year trilogy, Winn’s facing the challenge of one lifetime. If he doesn’t learn the truth about mythological creatures, his girlfriend Mac Thorne won’t either. That means, in six months, when she chooses her final form, she won’t know what to pick.
Winn, though, has his own ideas about Mac’s final selection—plans she knows nothing of.
He intends to have her pick human.
Whether she can or not.

The Cover Contessa's Review:
Really, that's how it ends???? REALLY EMI!!!!! COME ON! ugh, how long do I have to wait for the next book. I'm gonna pull my hair out! LOL!
Yup that was my initial reaction. But I wasn't disappointed with it. No I wasn't, not one bit. I am IN LOVE with this series. It's different, it's amazing, and you NEED to read it!

I want to thank J. Taylor Publishing for providing me with a copy of this book to read for an honest review. I was happily chosen to participate on this blog tour, as well, and that just made me happy with so much glee! Receiving this book for free has in no way influenced my opinion or review.

Ok, so first of all, I loved the first book in this series. I mean LOVED it. I could not put it down. Given the chance to read the second one early, well, you know I jumped at it. I also had the privilege of helping with the cover reveal of this one. And this made me super excited because I LOVE Winn. I mean, I want him for my boyfriend, BAD! So to have him on the cover, *SWOONS*! The cover made me want to jump right into the book just so I could throw myself at him! Sad? Hmmm...I'm sure many of you wouldn't think so if you got to know him!

Winn: kind, caring, loving, smart, nerdy, amazing...I could go on and on all day long about him. He's such a great character. And he grows on you so much. You want to just be right there with him to hold him and be a part of his life. And even when Mac tries to push him away, he has none of it. He loves her and he wants to be with her, for as long as he can, no matter what. So his agreement to teach her is no surprise, although I can't imagine he doesn't realize it's no easy task. She's so stubborn and really refuses to ask all the right questions. And it's so great to see things from his perspective (the human perspective that Mac could not really provide us with in the first book).
The supporting cast is great. I love all their differing points of view. I love that they are willing to talk with Winn ,despite him being human. And they answer his questions, for the most part, even if they do run around the bush just a bit. But he's not dumb, no no surely he's not. He knows exactly where they are headed. He knows he cannot tell Mac what she needs to know unless she asks the questions, but she avoids it like the plague. Despite this being frustrating (as are the supporting characters for the most part) I still wanted to just keep reading about anything and everything they had to say!
Most importantly, the characters are completely likable, even those you really want to hate. they serve their purpose so well. I can say that Mac was super frustrating in this story, tho. Seeing her through Winn's eyes really made me want to throttle her at times. But he loves her so much, I just can't hate her. And I so love their connection: outcast and geeky, nerdy, gorgeous guy! What's not to love.

And there is no telling where the story will go. Gayle keeps you guessing. I love that. I don't want to know. I want to be surprised. I want to be left to WANT to know the characters. And Gayle does this! It's just one big mystery after another, so intriguing, fascinating, really. Twists and turns that keep you guessing at every point. Boo ya to Gayle!

And let's talk about Gayle's writing. Oh gosh is it good. I love how she has them talking, has them pull you write into the story. And her descriptions are phenomenal.  I could kill her for leaving me with a cliff hanger! Especially with having to really wait so long for the next book. But her writing is so great I just can't hate her, I can only love her for bringing more of this story to me. The world building she does in this book is really great. It builds on all the histories that we got a glimpse of in the first book and shows us the depth of each paranormal being.

I will say I had a hard time choosing a rating for this book. I loved the first book so much, especially the story. I loved the story in the first book more than this one. BUT, I loved Winn's point of view so I just can't help but feeling torn in this book. But since I gave the first book 5 stars, and I really did love this, it came out in just the same spot. Really, I don't think anyone should miss this series. It's so different and amazing. Come on, dive into Mac and Winn's story. You won't be disappointed!