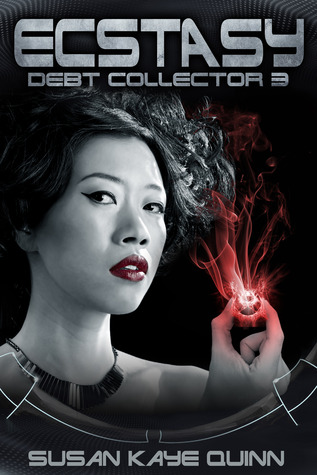 Blurb from Goodreads:Ecstasy- EPISODE 3 of the Debt Collector serial. Contains mature content and themes. For young-adult-appropriate thrills, see Susan's bestselling Mindjack series.What's your life worth on the open market? A debt collector can tell you precisely.Lirium's attempts to find Ophelia take him to the last place he wants to be.Ecstasy is approximately 15,000 words or 60 pages, and is the third of nine episodes in the first season of The Debt Collector serial. This dark and gritty future-noir is about a world where your life-worth is tabulated on the open market and going into debt risks a lot more than your credit rating.
Title: Ecstasy (Debt Collector 3)
Author: Susan Kaye Quinn
Publication Date: April 1, 2013

The Cover Contessa's Review:
A cliffhanger! ACK!!! Well, there's no way I'm not jumping at the next episode of this when it's released.Yup, once again we're following Lirium. And he's taking us on a dangerous ride. In his search for Ophelia, he finds himself in a few precarious situations: meeting up with a "mad scientist", visiting a "brothel", and dedicating his service to people he knows he should not be involved with. It's another fast and rocky ride from Susan Quinn. It's hard to put down. Her writing continues to amaze me!I think this might be my favorite episode so far. We are introduced to a few more characters, none that it seems Lirium can trust! And this episode is a little more gritty, and delves just a bit more into the adult content that has been mentioned in all the blurbs!I was definitely on the edge of my seat for most of this episode, pushing ahead so I could find out what happens! If Sue didn't have me hook, line and sinker before, well, she just put the nail in my coffin! COME ON April 17th!!!5/5 stars

Susan Kaye Quinn grew up in California, where she wrote snippets of stories and passed them to her friends during class. Her teachers pretended not to notice and only confiscated her stories a couple times.Susan left writing behind to pursue a bunch of engineering degrees, but she was drawn back to writing by an irresistible urge to share her stories with her niece, her kids, and all the wonderful friends she’s met along the way.She doesn’t have to sneak her notes anymore, which is too bad.Susan writes from the Chicago suburbs with her three boys, two cats, and one husband. Which, it turns out, is exactly as a much as she can handle.
Goodreads/Facebook/Website/Twitter