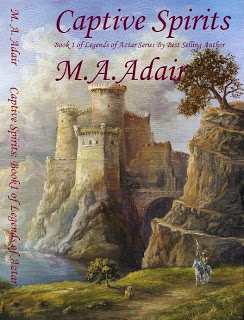 Captive Spirits Aztar is a planet where no one remembers a time of peace. Fear of those who wield a mystical cruelty holds people as CAPTIVE SPIRITS. All that remains is the waning belief in a savior who will someday come to restore peace to a blood soaked land. Zmeria, an ancient text recovered, brings a Prophecy to life. The leaders of each Region come together with a plan to reunite Aztar's divided people and make way for their savior. They arm themselves with the recently discovered revelation of peace long past. A dream is born and legends revived as Aztar’s people determine to fight the evil and Reclaim Aztar. The Evil’s grasp is strong on the CAPTIVE SPIRITS of Aztar. Leaders know this battle to free the will and spirit of the people will not be easily won. They decree a King must be chosen. One man of the entire world stands out from the rest. Si, the firstborn son of the house of Volcum, is well known for valor and victories in battle. A kingdom must be established. As the center of his kingdom, Si Volcum decreed an ancient, long deserted castle far to the north that contained the lost records of Aztar’s forgotten glory. He accepted his chosen bride, Alexis, unseen from a house as old as his own. Si ruled and the land prospered for fifteen years while evil silently waited. The King did not know when evil struck it would be personally against him or that the price would be so high. The people of Aztar chose well in their King. Si will not hesitate. The King will pay the price. From his love and chosen path, the Saga of Aztar begins with the legend of her first King, Si Volcum. “Reclaim Aztar,” will be their battle cry.

Author M.A. Adair Mary A. Adair is an Amazon best selling author of Native American Romance. CAPTIVE SPIRITS is her first Young Adult Fantasy. It is the beginning to a Young Adult Fantasy series that can also be enjoyed by all adults. Mary's other works include Passion's Vision and Passion's Price, both are Best Selling Native American Romance. Mary did extensive research on several Native American tribes in the time period of her books. One of her many sources for learning about the rich Native American culture of that time period was a book written in the mid. 1700s by one of her husband’s ancestors, James Adair. PASSION'S VISION, a story filled with romance, excitement and danger. This story features James Fitzgerald, an agent in the court of King George II and New Moon, sister to Chief Dancing Cloud. PASSION'S PRICE is a poignant love story with a twist of humor. It is a next generation story filled with adventure and determination as well as self-realization and of course Romance. PASSION’S PRICE continues with James's and New Moon's daughter, Golden Dawn.

Facebook * Blog * Website * Twitter
Book Blast Giveaway $50 Amazon Gift Card or Paypal Cash Ends 4/30/13   Open only to those who can legally enter, receive and use an Amazon.com Gift Code or Paypal Cash. Winning Entry will be verified prior to prize being awarded. No purchase necessary. You must be 18 or older to enter or have your parent enter for you. The winner will be chosen by rafflecopter and announced here as well as emailed and will have 48 hours to respond or a new winner will be chosen. This giveaway is in no way associated with Facebook, Twitter, Rafflecopter or any other entity unless otherwise specified. The number of eligible entries received determines the odds of winning. Giveaway was organized by Kathy from I Am A Reader, Not A Writer http://iamareader.com and sponsored by the author. VOID WHERE PROHIBITED BY LAW.    a Rafflecopter giveaway
at 12:00 AM