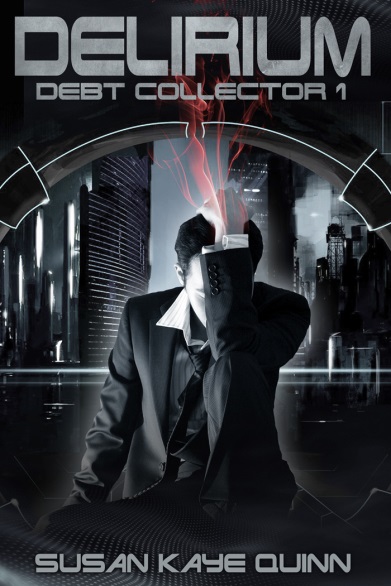 What’s your life worth on the open market? A debt collector can tell you precisely.Lirium plays the part of the grim reaper well, with his dark trenchcoat, jackboots, and the black marks on his soul that every debt collector carries. He’s just in it for his cut, the ten percent of the life energy he collects before he transfers it on to the high potentials, the people who will make the world a better place with their brains, their work, and their lives. That hit of life energy, a bottle of vodka, and a visit from one of Madam Anastazja’s sex workers keep him alive, stable, and mostly sane… until he collects again. But when his recovery ritual is disrupted by a sex worker who isn’t what she seems, he has to choose between doing an illegal hit for a girl whose story has more holes than his soul or facing the bottle alone—a dark pit he’s not sure he’ll be able to climb out of again.

If you do not read any other novella this year, you MUST read this one! Susan has done it yet again. She's taken science fiction and romance and action to a whole new level. She's sucked me right in with it, too! When I heard Sue was writing more, I had to get my hands on this. I loved her Mindjack trilogy so much!
What can I say, first of all, about this cover. I LOVE IT! It's such a great depiction of the main character!And the main character, Lirium (or Delirium) well, he's just awesome. I love his way of telling his story. I didn't get a full sense of him, since this is only a novella and I know there's more to come but I can tell that he is independent and self serving, at least at first. As the story progresses you see him change a bit, beginning to mold into something he knows he's not supposed to be. But it's a better mold and he is pulled to take the risk of doing it. I find myself wanting to know more about him. Why did he take this job? What was it like for him growing up? And he's so young, how long has he been doing this? Where is his family? So many questions that I hope to have answered as I make my way through this series. Susan has done something totally creative with this series, she is releasing the book in episodes. And let me tell you, she left me wanting the next episode RIGHT NOW! I love the dark world she has created where people give up their life force to pay off their debt. I need to know more about how this came about and why? I need to know about those who might be bucking the system and those who might be taken too early with so much life force yet left to live!And her writing, oh her writing! It's just great. It flows so easily and pulls you right through the story. I couldn't put it down once I picked it up.This story really captivated me and I am already addicted. It's edgy and different. It will suck you right in. So go get your copy and jump on the ride that is The Debt Collector!5/5 stars!

Susan Kaye Quinn grew up in California, where she wrote snippets of stories and passed them to her friends during class. Her teachers pretended not to notice and only confiscated her stories a couple times.Susan left writing behind to pursue a bunch of engineering degrees, but she was drawn back to writing by an irresistible urge to share her stories with her niece, her kids, and all the wonderful friends she’s met along the way.She doesn’t have to sneak her notes anymore, which is too bad.Susan writes from the Chicago suburbs with her three boys, two cats, and one husband. Which, it turns out, is exactly as a much as she can handle.