Today I am super excited to welcome one of my most favorite authors to The Cover Contessa, Susan Kaye Quinn. I was first introduced to Susan's Minjack series last year after I read The Hunger Games. Susan's book came up as something I might be interested in when I was searching for something else to read and I though, why not? Her cover drew me right in! And I was not disappointed in the least! Let's learn a little about Susan:

Susan Kaye Quinn grew up in California, where she wrote snippets of stories and passed them to her friends during class. Her teachers pretended not to notice and only confiscated her stories a couple times.
Susan left writing behind to pursue a bunch of engineering degrees, but she was drawn back to writing by an irresistible urge to share her stories with her niece, her kids, and all the wonderful friends she’s met along the way.
She doesn’t have to sneak her notes anymore, which is too bad.
Susan writes from the Chicago suburbs with her three boys, two cats, and one husband. Which, it turns out, is exactly as a much as she can handle.

Susan's Minjack Trilogy is truly an out of this world read: 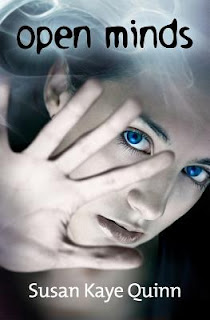 Sixteen-year-old Kira Moore is a zero, someone who can’t read thoughts or be read by others. Zeros are outcasts who can’t be trusted, leaving her no chance with Raf, a regular mindreader and the best friend she secretly loves. When she accidentally controls Raf’s mind and nearly kills him, Kira tries to hide her frightening new ability from her family and an increasingly suspicious Raf. But lies tangle around her, and she’s dragged deep into a hidden world of mindjackers, where having to mind control everyone she loves is just the beginning of the deadly choices before her. 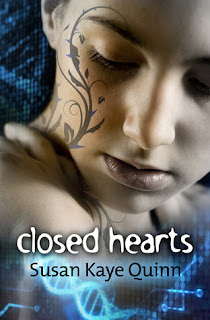 Title: Closed Hearts (Mindjack Trilogy, #2)
Publication date: May 23, 2012
Publisher: Susan Kay Quinn
Buying links:
Amazon
Barnes and Noble
Eight months ago, Kira Moore revealed to the mindreading world that mindjackers like herself were hidden in their midst. Now she wonders if telling the truth was the right choice after all. As wild rumors spread, a powerful anti-jacker politician capitalizes on mindreaders’ fears and strips jackers of their rights. While some jackers flee to Jackertown—a slum rife with jackworkers who trade mind control favors for cash—Kira and her family hide from the readers who fear her and jackers who hate her. But when a jacker Clan member makes Kira’s boyfriend Raf collapse in her arms, Kira is forced to save the people she loves by facing the thing she fears most: FBI agent Kestrel and his experimental torture chamber for jackers

Susan also has several shorts to go along with this series:

So now let's hear what Susan had to say in response to our
questions: