Today I am very excited to welcome author Heather Burch to The Cover Contessa. Heather is here to answer a few of my most pressing questions. But before that happens, let's learn a little about Heather and her books!

If you have not heard about Heather's books, run, don't walk, and get them now! 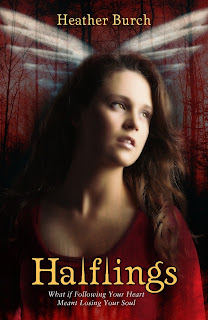 Title: Halflings (Halflings #1)
Publication Date: February 1, 2012
Publisher: Zondervan Publishing
Buying Links: Amazon, Barnes and Noble
After being inexplicably targeted by an evil intent on harming her at any cost, seventeen-year-old Nikki finds herself under the watchful guardianship of three mysterious young men who call themselves halflings. Sworn to defend her, misfits Mace, Raven, and Vine battle to keep Nikki safe while hiding their deepest secret—and the wings that come with.A growing attraction between Nikki and two of her protectors presents a whole other danger. While she risks a broken heart, Mace and Raven could lose everything, including their souls. As the mysteries behind the boys’ powers, as well as her role in a scientist’s dark plan, unfold, Nikki is faced with choices that will affect the future of an entire race of heavenly beings, as well as the precarious equilibrium of the earthly world 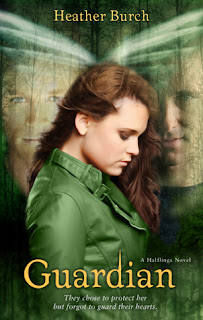 Title: Guardian (Halfings #2)
Publication Date: October 9, 2012
Publisher: Zonderkidz
Buying Links: Amazon, Barnes and Noble
Vigilance. The mission to safeguard Nikki Youngblood depends on the fragile alliance of two half-angel, half-human guardians, both struggling with intense feelings for the girl who has been assigned to their care. Mace, steadfast and deeply in love, wants to protect Nikki at all costs, while Raven's loyalty to Nikki finds him advocating for her independence and battling his own darker inclinations. At the same time, Nikki finds it harder and harder to choose between the two heavenly beings she may never have. Dangers intensify, and tensions between Mace and Raven flare as the purpose of their mission becomes clear. Can their defenses hold up to master manipulator Damon Vessler and the powerful secret he holds regarding Nikki's heritage? Can anyone protect Nikki from her true purpose and destiny? 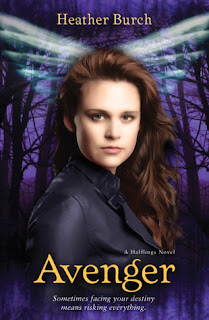 And how about a little about Heather before she answers some questions: 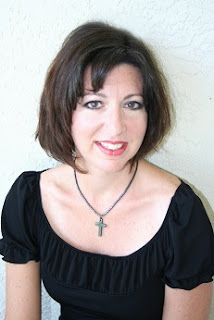 I write full time and love being involved with groups that promote books! Writing about the Halflings has been the most exciting writing journey of my life! Before novels, I wrote teen curriculum published in both the U.S. and Asia Pacific.
I've had a blast the last several months traveling the country and meeting fans! From Missouri to Miami, I've gotten to meet awesome Halflings enthusiasts at book stores throughout the U.S.
I'm repped by the AMAZING Jennifer Schober at Spencerhill Associates
and as of today, I'm working with a fabulous publicist who is planning a cool Florida book tour of YA authors.
I've taught in the U.S. and Mexico at women's and teen conferences. Teen conferences ... sooo fun!!!!

Now let's hear what Heather had to say in answer to my most pressing questions!

Did you always know you wanted to be a writer or did you want to be something else?
I’ve always done a lot of writing. Even when I was young. But through high school I wanted to write rock music videos. MTV was becoming popular and I thought it was sad that so many songs tell a story, but the story wasn’t reflected in most of the videos. It wasn’t until I was out of school that I seriously thought about writing novels.

How long does it take you to write a book from start to finish?
It’s about a six months process for me. I usually do a lot of brainstorming and writing in my head before I begin, but once I’m sitting down, I like to have six months. I’ve written a book in as short as four months, but it’s a killer for me.

How do you come up with themes for your stories?
I find things I’m interested in then begin to twist them into the unknown. I usually have two competing ideas and try to sculpt them together. I love opposites. There seems to be a reoccurring theme of opposites in all my books.

Do you have a schedule of when you write?
I begin in the mornings by about 6:00 a.m. and write until around 1:00 p.m. But I always take breaks for coffee, bowl of cereal… I only write four days a week, so I try to be very disciplined on those days. Unless I’m on deadline, then all bets are off. I may be at the computer 14-16 hours at a time. But those kinds of hours aren’t the norm.

How are you able to balance other aspects of your life with your writing?
Not as well as I’d like. Just kidding. I have a great family support system. They understand that when I’m beginning to live a story, it’s always working in the back of my mind. My sixteen year old son will sometimes apologize for me in a store or restaurant if my mind is off on another planet. He tells people, “Sorry, she’s a right-brainer. You’ll have to ask her the question again.” I couldn’t do this without my husband and two sons.

What elements do you think make a great story line?
Oooooh. Good question! I’ve actually taught on this. You need 3 magic things.
1.     An unforgettable character
2.     An impossible situation
3.     A relentless threat

What was the hardest thing about writing a book?
Waiting. Halflings had been written for a year before it found the right home. I really believed in the story, the characters, the plotline. But it took some time for the market to catch up to the idea. Now, angel books are everywhere, but when I wrote Halflings, vampires were all the thing. Waiting is so hard, but in the end, it’s worth it!

How many books have you written so far? Do you have a favorite?
I’ve written about 9 complete novels now. GUARDIAN is my favorite because it was so much fun to write. I got the chance to explore some of the secondary characters (like Zero) and the female Halflings. Plus, with the big reveal near the end of the book, it made the writing go by so quickly! I was working hard to get to the reveal!

Do you have a favorite character?
Oh, that’s tough. Raven is a favorite of mine. So is Vine. He’s so sweet and innocent and yet, the best warrior to walk the earth. It’s hard to choose.

Where do you write?
Usually at home in my office. I have a giant window that faces a palm tree. Nice for inspiration. Sometimes, when I need a change, I take my computer to Panera Bread or Starbucks. Once in a while, I go out to the beach. But not too often. The water is far too great a temptation and I end up people watching or scanning for Dolphin.

When deciding on how to publish, what directed you to the route you took?
I just knew in my heart I wanted to go the big publisher route. I wanted to have books in bookstores across the country and I didn’t mind waiting however long that took. I knew with the right combination of story and voice, I’d one day sell to a big publisher. Halflings became my “right combination.” I wrote five books before Halflings that weren’t quite “ready.” But, I’m so happy the Halflings Series became my debut.

Have you gotten feedback from family about your book(s)? What do they think?
I married into a family of published novelists so, yes, they read as I’m writing. If I get twenty pages done over a couple days, I send them out to them. Great help! Also, my husband does a lot of the plotting with me so whenever I get stuck, he helps guide me through. All of my family loves the Halflings. Even my father-in-law reads the stories and will occasionally say, “Hey, Raven wouldn’t say that.” I go back, look, reread and usually decide he’s absolutely right.

What kinds of things do you like to do outside of writing?
I’m totally a theme park junkie. We love going to Disney, Busch Gardens (great roller coasters) and Universal Studios. Also, I like spending time at the beach and recently we’ve started hiking. We used to hike quite a bit. It’s nice to be doing that again. Also, I love boats. Put me on the water, I’m a happy girl.

What kinds of advice would you give to someone who wants to start writing?
Write and write and write and write. There are fabulous workshops available online about how to write books. RWA is an organization that offers tons of help for writers. It’s worth joining! Get involved in a writer’s group or local chapter of RWA. You will learn so much and make great connections. Even having family who has published multiple novels, my strongest publishing connections came from writer’s groups.

What is your favorite book? Favorite author? Do you have an author that inspired/inspires you to write?
My favorite book changes with my mood. So, that’s a tough one to answer. Of course, I love Hunger Games and am inspired by the story as well as her amazing voice.

Do you have any go to people when writing a book that help you with your story lines as well as editing, beta reading and such?
My hubby is my plotting partner. He has the most amazing creative ideas. Every time I paint myself into a corner—which is pretty often—he knows how to get me out of said corner. See, I like to put my characters in truly impossible situations. Then, I rely on the character to think of a way out of it. I don’t have those details worked out in the beginning. I think it keeps the conflict fresh and the pressure heavy.

Are you working on anything now?
Book three, AVENGER will release in April. I’m waiting on edits. In the meantime, I’m working on a couple of new things. Very excited about them. And that’s all I better say right now. J But I will definitely let you know when the time comes …

Heather, thanks so much for stopping and sharing all of this with us  on The Cover Contessa! We look forward to your new releases and hearing more from and about you in the future!
at 3:01 AM