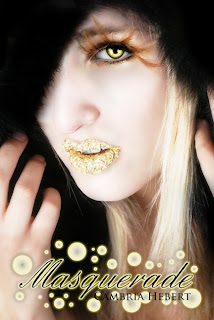 Masquerade by Cambria Hebert
My rating: 4 of 5 stars

I want to thank author, Cambria Hebert, for providing me with a copy of this wonderful book to read and give an honest review.

Blurb from Goodreads:
Before. Everything was so much better Before. I wasn’t haunted by nightmares, my place at school was secure and my face was flawless. Now, I’m a freak and everything has changed. The worst part is that I can’t remember the night I was sentenced to the shadows. The memory has been stolen from me and I just can’t shake the feeling that someone, something is out there -watching.
Just when I think I have my life handled, Sam, with his intimidating golden stare and shiver inducing voice, makes me realize that I don’t know anything. He makes me see that my scars don’t matter. That they never mattered. I can’t help but fall for him, completely unknowing that he knows exactly how I got this way. Not knowing he was involved.

***
Heven has no idea how closely death stalks her. She has no idea what I have done to keep her alive. I fear the day she learns my secrets, finds out what I really am. But even then I cannot stop, I vow to make things right. Finally her hunter will be hunted, Heaven and Hell, faith and sin will battle, and we will be victorious. But first, Heven must learn to be what she never imagined. I know her strength is there – I feel it. If we are to overcome all odds, she must push past her flaws - her frailties - to become much more.

First, I have to comment on this totally awesome cover. It's really the first thing that drew me to this book. It is just gorgeous and completely captures Heven! Once you read this book, there is no way you can't see that this is Heven and what she is about.

I happened to read the prequel, Before (Heven and Hell #0.5) before I read this book, and, honestly, I think it made things a little more clear for me right from the beginning. Tho there was still quite a bit of mystery surrounding Sam.

Heven: I like her. She's believable to me as a teen character. I connected enough with her to feel her angst, her fear, her self-conciousness. I can definitely picture, in my mind, a young girl hiding her scars from the world and being embarrassed to show them. And she certainly grows throughout the book, accepting her scars and who she is, realizing that she pulled away from all those who were special to her. Her relationship with Sam is, of course, tentative at first. They seem to have a connection, which I understood much later in the book. And you certainly feel badly for Heven, that she was injured, that she feels like she can't show her face, that she feels like she has no one but her best friend Kimber to go to in her time of need. Heven certainly comes into herself by the end of this book, showing us that people can grow and change as they overcome the giant obstacles set before them. I was able easily sympathize with Heven during her down times, and cheered her on during the times she was strong. Heven's ability to put herself into situations that would get her hurt got to be a little frustrating. She knew she was in danger, yet she took many risks with her life, as if it didn't matter to her that she might get hurt. And she often didn't realize she was even doing this, as she never mentions it during those times at all.

Gorgeous and perpetually sweet Sam: the mystery of him was driving me bonkers. I could tell he was some kind of "animal" but I just could not figure out what he was. And then suddenly it's revealed and I had that lightbulb moment. I have only read one other series with this type of creature in it, and it was a bit different. I loved how we finally understood his strength, his not being injured by fire, and his other strange abilities that just kept me guessing. I did find that his speech was not consistent with his age. He said "honey" and "sweetheart" so many times during the second half of the book, it actually began to annoy me. But overall I liked his character and how he cared for Heven. He took on the task of protecting from the very start, before he even know what his true purpose was.

The ancillary characters are nicely enough laid out. Kimber is your typical high-school girl, obsessed with clothing and boys. She's a bit wishy washy with her need to make her boyfriend, Cole, jealous. And she is quick to accept the relationship between Sam and Heven, despite the fact that we see her having some feelings for him in the beginning of the book. Cole certainly cares for Heven, tho it's hard to understand in what capacity. On the one hand you feel like he has a thing for her, then you suddenly feel as if he might not be exactly who he says he is. He's kind of hard to figure out. Heven's mom is annoying. I didn't really get a sense of the relationship they really had and then suddenly she's overpowering. I was kind of surprised. And I really could not get a good read on what China looked like. I knew she was evil, but because we don't really "meet" her until later, I had a hard time believing her character. I loved Heven's grandmother. I was expecting her to know more about Heven and her purpose, but that never came out during this book. She seemed to be the person who cared most for Heven, tho I thought at some parts she could have been more verbal and stood up for Heven. The Hate and Hope sections of the book honestly had me a bit confused. I understood where Hebert was going with them, but not until I was a good half way through the book. I think the ancillary characters probably could have been more well developed, but overall they certainly add to the story.

I like the plot line of the story, how it kept you guessing, taking many twists and turns. It was dark and mysterious and certainly kept me reading on. There were many twists and turns that were unexpected. The interactions between Sam and Heven were often heart pounding and certainly made me want to move on through the book to find out what was really happening. The moments between Sam and Heven are really often breathtaking. I certainly felt their need for each other as well as their need to protect eachother.

The POV switches in this book annoyed me. I didn't think there was enough from Sam, tho I understand that the focus of the book was supposed to be on Heven. In my opinion when a POV book is written, I expect to really get an equal amount from all characters, but that didn't happen here. I honestly think it could have been laid out better. I got confused when the POV changed. Perhaps starting a new chapter for each POV might have made more sense rather than switching around within one chapter. It broke the chapter up too much for me. It was nice, however, to get a sense of the characters through their POVs. I just think it could have been handled better to make the story more fluid.

I really enjoyed Cambria's fluid writing style. Her descriptions were pretty spot on, although in some of the fight scenes I had to go back and read a bit again to get to complete picture in my head. But there's no denying that I can visualize the main characters very well and most of the ancillary characters. The world building was interesting, for sure. I could also see the different personalities of most of the characters without having to read into anything. And Cambria's storyline was fairly unique, so that just leant to the credibility of her as an author.

Of course I am curious where things are going. Any story that introduces a new character right at the end certainly leaves you in suspense and wanting more.

I give this story 4 stars out of 5 as I really enjoyed as a whole, despite the few things I think could have been worked out better.

This review also posted at the following sites: